Is this biblical ‘curse tablet’ the most significant discovery in recent history?

A newly discovered Hebrew tablet containing an early use of the holy name of God, Yahweh, has prompted excitement around the world, with one professor describing it as “the most important inscription ever found in Israel.” Chris Sinkinson agrees it could be a significant relic, but argues caution may also be required. 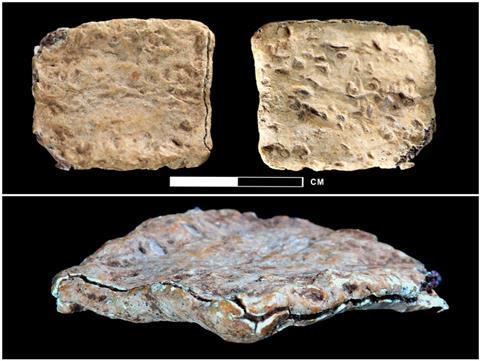 A recent announcement of an archaeological discovery has been described as “the most important inscription ever found in Israel.” Prof. Gershon Galil’s words have been reported in news outlets around the world, but caution is required when evaluating what is being claimed.

The discovery is a tiny 2cm x 2cm folded lead tablet bearing an inscription which may tie in with biblical history. It was found by archaeologists involved in an excavation at Shiloh in the West Bank.

While there is some evidence of letters on the outside of the tablet, the inscription itself is on the inside. The folded lead has proven impossible to open without risking its destruction but a photographic scanning technology has been used to reveal a text inside. Two epigraphers (experts in reading ancient inscriptions) have been engaged in making sense of the inscription and they have concluded that it is in Hebrew and carries a curse using a typical style of Hebrew writing called parallelism:

The text is an example of a curse pronounced upon oneself - an echo of the kind of words that would have been spoken by the Israelites on Mt. Ebal at the time of Joshua (Deuteronomy 27-28). Such curse texts, inscribed on lead, are uncommon but not unique. The practice of inscribing text onto metal is even noted in the Bible (Job 19:24).

What makes this discovery so important is that it would be a very early example of Hebrew writing and early use of the holy name of God, Yahweh. If the dating is accurate, this tablet is 1,350 years older than the Dead Sea scrolls, meaning it predates all other examples of ancient Hebrew writing.

The tablet was found on Mt. Ebal where what is thought to be an ancient altar was discovered in the 1980s. The altar has evidence of belonging to the period of Joshua, c.1400-1200 BC, and is located where the Israelites performed a renewal of their covenant with God in the Promised Land.

When the altar was excavated in the 1980s it created a large mound of discarded earth. This debris had been sifted at the time to identify any objects that might have been missed, but, since then, techniques have improved. A new team, led by Scott Stripling, have been wet sifting that dumped earth to see if anything else could be found and this is how the lead tablet was discovered.

While many media outlets have celebrated the announcement, scholars have generally given it a frosty reception. It is worth considering why they do.

No doubt some have political reasons: the excavations are in the West Bank, territory which is disputed between Israelis and Palestinians. Others have philosophical reasons: there is an antipathy toward anything that could confirm the reliability of the Bible.

However, there are some more serious reasons why we might want to hold fire on our judgement. First, it is unusual to make a public announcement without first subjecting a discovery to peer review through publishing the data.

Secondly, the dating of the tablet is difficult as it was found out of any stratigraphical context in a dump of spoils. Adam Zertal, who found the altar on Mt Ebal, dated it in the range of c.1400-1200 BC but the earth removed in its excavation has lost all context. Therefore, the possible date range for the lead tablet is very wide.

In the past, sensational claims turn to ash in the crucible of serious analysis. So, let’s wait and see how this turns out

Thirdly, early alphabetic scripts are notoriously hard to read. Similar inscriptions found in the Sinai desert and at Khirbet Qeiyafa in Israel have been studied for many years without a conclusive understanding of their meaning. The Mt. Ebal inscription must be submitted to wider scrutiny to be confident that it is a Hebrew text, that the translation is correct, and that it belongs to the period attributed to it.

Christopher Rollston, a Professor of Northwest Semitic Languages and Literature, has commented on the find saying “the best predictor of the future is the past, and in the past, time and time again, sensational claims turn to ash in the crucible of serious, philological and epigraphic analysis. So, let’s wait and see how this turns out.” The Mt. Ebal curse tablet may turn out to be the most important inscription to be discovered in recent history, but the jury is still out.

Chris SinkinsonChris Sinkinson is a lecturer in biblical and theological studies at Moorlands College and author of Time Travel to the Old Testament (IVP). He originally studied Philosophy and English before going on to complete an MA and PhD in Theology. He has been involved in Christian ministry with UCCF as a Regional Staff worker and as a Church pastor. He was the senior pastor of Alderholt Chapel in Dorset for over ten years.