Kallistos Ware (1934-2022): The evangelical ‘convert’ to Orthodoxy was a father in the faith to many

Metropolitan Kallistos Ware was a distinguished pastor, scholar and theologian in the Orthodox Church who treasured his evangelical roots. Greg Downes remembers him 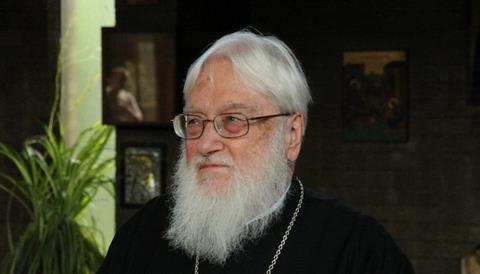 It was once said to me, when I told someone that I had studied theology at Oxford University in the early 90s: “Ah you were there at the time of the Oxford greats - Wright, McGrath and Kallistos”.

When I arrived in my early 20s, NT Wright and Alister McGrath were known to me - but who was the mysterious Kallistos?

Born Timothy Ware, he grew up in Bath, UK in a devoted Christian family in the evangelical Anglican tradition.

He converted to Christ at 16 but didn’t become part of the Eastern Orthodox Church until he was 24. Kallistos would have thoroughly approved of the evangelical terminology I’ve just used. He wrote in Response magazine: “When I was 16 I underwent what I consider to be my conversion. People often talk about being a ‘convert’ as meaning the move from one Christian community to another. I don’t think that usage is strictly accurate. Conversion is to Christ”

Ware forever retained an affection for his native Church of England - in fact his more conservative detractors within Orthodoxy saw him as a maverick liberal and argued he had never really left!

“I shall never cease to be sincerely grateful for my Anglican upbringing. Never would I wish to engage in negative polemic against the communion where I first came to know Christ as my Saviour,” Kallistos wrote in The Inner Kingdom.

It was seemingly by chance that he stumbled into the Orthodox Church of St Philip’s, Buckingham Palace Road (now demolished) while in sixth form at Westminster school. It was a defining moment in his life which would ultimately lead to his reception into the Greek Orthodox Church seven years later.

He described the experience with damascene phraseology, saying he felt “a sudden rush, by an overwhelming sense of presence. I felt that the church, so far from being empty, was full — full of countless unseen worshippers, surrounding me on every side. Intuitively I realised that we, the visible congregation, were part of a much larger whole, and that as we prayed we were being taken up into an action far greater than ourselves, into an undivided, all-embracing celebration that united time and eternity, things below with things above.”

He even likened it to St Vladimir’s conversion who upon experiencing the Orthodox liturgy for the first time said: “We knew not whether we were in heaven or on earth…for on earth there is no such splendour or such beauty, and we are at a loss how to describe it. We only know that God dwells there among men…For we cannot forget that beauty.”

After this experience he went to Oxford to read classics and theology at Magdalen College but his ‘Buckingham Palace Road experience’ never left him and at the age of 24 he was received into the Greek Orthodox Archdiocese of Thyateira & Great Britain.

Journey to the Priesthood

The Orthodox Bishop who received him told him emphatically: “Please understand that we would never, under any circumstances, ordain you to the priesthood; we need only Greeks.”

He first became a monk at the monastery of St John the Theologian on Patmos, and it was here he took the ‘religious name’ Kallistos, which means ‘beautiful one’.

He was ordained priest in 1966 (eight years after being told he would never be one!) and served in the Greek Orthodox parish of the Annunciation, in Oxford. In the same year, he was appointed Spalding Lecturer in Eastern Orthodox Studies, in the University of Oxford, where he taught for 35 years.

Above all he was a man of God: part scholar, part mystic

After first becoming aware of him as a theologian when I came to Oxford in 1993, I was again conscious of his influence when I became Chaplain of Pembroke College in 2004 - this time as a benevolent grandfather figure in the college (known affectionately as Gandalf the Great to the students).

My successor, Rev Dr Andrew Teal tells the story of being corrected with grace and humour by Kallistos after telling him that he loved his old car. “Love it, Father? One can only love persons. You may love your car, but your BMW does not love you!”

Loyal to the Gospel

As a small boy growing up in his evangelical Anglican home Kallistos recalled wanting to be either a train driver or a bishop. The Church of England’s loss was the Orthodox Church’s gain as in 1982, he was consecrated Bishop of Diokleia in Phrygia (later made a titular metropolitan bishopric in 2007, under the Ecumenical Patriarchate of Constantinople).

He was one of the early evangelical ‘converts’ to Orthodoxy (he wouldn’t approve of my terminology here!). Others have since followed.

Kallistos’ move to Orthodoxy was primarily a ‘running to’ rather than a ‘running from’ but he was nonetheless aware of a doctrinal eclecticism within Anglicanism that did not sit easy with him: “I was…disturbed by the existence within Anglicanism of a ‘liberal’ wing that calls in doubt the Godhead of Christ, his virgin birth, his miracles and his bodily resurrection.” This unease only increased over the years, despite his affection for the church in which he came to faith.

The Church Times was right to state: “With the death of Metropolitan Kallistos…the Orthodox Church has lost one of its best theologians and pastors, and Oxford a distinguished scholar.” However, Kallistos’ loyalty was always first and foremost to the Gospel of Christ and his Church before ever the academy (evangelicals working in the University of Oxford would do well to take note of this).

In The Orthodox Way he wrote: “The culture and educational system of the contemporary West are based almost exclusively upon the training of the reasoning brain and, to a lesser degree, of the aesthetic emotions. Most of us have forgotten that we are not only brain and will, senses and feelings; we are also spirit. Modern man has for the most part lost touch with the truest and highest aspect of himself; and the result of this inward alienation can be seen all too plainly in his restlessness, his lack of identity and his loss of hope.”

Above all he was a man of God: part scholar, part mystic who was a father in the faith to many.

He poignantly wrote: “We are on a journey through the inward space of the heart, a journey not measured by the hours of our watch or the days of the calendar; for it is a journey out of time into eternity.”

On 24 August his “journey out of time into eternity” took on an entirely new dimension.

Greg DownesGreg Downes is an international evangelist and director of Kingfisher Ministries. He is the former Dean of the Wesley Centre at Wycliffe Hall, Oxford University