Even before 650 bishops from across the world descended on Canterbury for the much anticipated Lambeth Conference, yet another row over same-sex partnerships was brewing. Tim Wyatt unpacks exactly what happened, why it matters, and what the future might hold 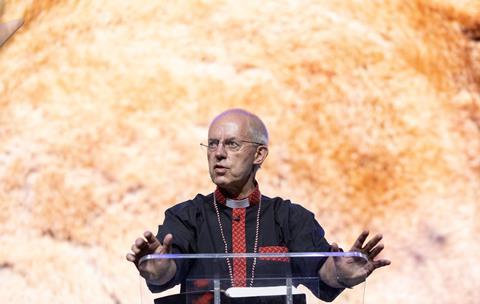 Apocalypse: not just yet?

On the eve of the Lambeth Conference a few weeks ago, it seemed for a time as if the Anglican Communion might be about to blow up.

A row over gay marriage looked like tipping the two sides into full-blown confrontation and potentially schism. Some skilful backroom mediation by Most Rev Justin Welby, Archbishop of Canterbury and a partial climbdown on a contentious document meant by the end of the conference things had calmed down and this fractious family of churches continued onwards.

Outright catastrophe had been averted, but has the internal squabbling been quashed forever or just brushed under the carpet?

The stakes coming into the 15th Lambeth Conference could hardly have been higher. Fourteen years in the making, this gathering of every Anglican bishop worldwide had first been delayed in 2018 when Archbishop Justin concluded tensions were too high and relationships too bitter to warrant flying church leaders into Canterbury. It was pushed back to 2020, only for the Covid pandemic to prompt another postponement.

This conference was also the first since the highly contentious meeting convened in 2008 by former Archbishop of Canterbury Rowan Williams, which saw several bishops boycott the meeting because the Episcopal Church (TEC) in the United States had made Gene Robinson, an openly gay man in a same-sex partnership, a bishop. Conservative elements of the TEC broke away to form their own Anglican network in the wake of the Robinson affair, while it also prompted the creation of the quasi-breakaway GAFCON movement of conservative churches, mainly located in Africa and Asia.

Western liberal churches continue not only ordaining gay men and women as bishops but also rewriting their marriage laws to remove any mention of gender. Anglican denominations in Scotland and Wales, as well as Brazil and Canada, have followed the Americans in various forms of liberalisation on LGBT issues, and there is constant pressure on the Church of England to follow suit. This has prompted renewed fury from GAFCON conservatives who accuse other provinces of betraying both scripture and Anglican tradition and continued busily making parallel structures and relationships outside the Communion. Once again, several African churches – Uganda, Rwanda and Nigeria – refused to attend the Lambeth Conference in protest at the presence of what they consider to be renegade heretical bishops from the more liberal churches.

The British Anglican priest and theologian Rev Ian Paul notes another complicating factor, namely the mismatches of people and money across the Communion. The churches which are growing tend to be those in the Global South and are more likely to be conservative, he noted, whereas those which are declining fastest are in the more liberal Western nations. However, it is the liberal churches which have the largest historic assets and contribute most money towards Anglican affairs – including putting on the Lambeth Conference. In the midst of these tensions and bitter arguments over sexuality, the threat of this centuries-old family of churches being torn apart was very real.

What was different in 2022 was a new conservative grouping, which called itself the Global South Fellowship of Anglicans (GSFA). Unlike GAFCON, they attended the conference, arguing they were not called to quit in protest but instead act as a “holy remnant” calling the liberal churches back to “the faith once delivered”. In particular, the GSFA – which claims to represent 25 of the 42 churches in the Communion – demanded the bishops at the Lambeth Conference reaffirm Resolution 1.10. First issued by the 1998 Conference, 1.10 states that Anglicans believe marriage is only between one man and one woman and that “homosexual practice is incompatible with scripture”.

Just days before the conference began, its draft resolutions were published. The document on Human Dignity included a reaffirmation of Lambeth 1:10 and the statement: “It is the mind of the Anglican Communion as a whole that same-gender marriage is not permissible”. In effect, the 650 or so bishops at Lambeth 2022, including several who were themselves in gay marriages and dozens who endorsed them, were going to be asked to declare that Anglicans do not believe in gay marriage.

This provoked an immediate backlash, with many liberal bishops decrying the re-emergence of 1.10 and insisting they would not vote for it. Pouring fuel on the fire of suspicion and anger, a gay Canadian bishop who was part of the group which drafted the text on Human Dignity said there had been no mention of 1.10 during discussions. Instead, he said the reaffirmation of 1.10 had been mysteriously inserted after their deliberations had finished.

The offending clause was swiftly removed and replaced with more anodyne text which noted that some Anglican churches still upheld 1.10, while others had decided to welcome and bless gay marriages.

“As Bishops we remain committed to listening and walking together to the maximum possible degree, despite our deep disagreement on these issues,” it concluded.

This pragmatic statement of realities was passed without much incident when it came up during the conference some days later. In effect, it was a continuation of the plan Archbishop Justin has upheld since he became archbishop. He has aimed to hold a delicate balancing act, reassuring conservatives their longstanding positions have not been abandoned while also not antagonising progressives keen to move the discussion forward.

An earlier example of this came years earlier in the planning for the Lambeth Conference, when Archbishop Justin decided to invite gay bishops – unlike in 2008 when Robinson was not invited – but in a sop to conservatives said they could not bring their same-sex spouses unlike all the other bishops.

While this approach risks frustrating both sides simultaneously while pleasing no one, it seems to have steered the Communion through the choppy seas of Lambeth 2022 without a shipwreck.

By opting for a descriptive approach of the realities – some churches do gay marriages while others don’t – rather than a prescriptive statement of belief, the new Lambeth Call on Human Dignity found acceptance on both sides of the aisle.

Liberals hailed it for acknowledging their position for the first time, while conservatives cherished the fact it pointed out 1.10 remained in existence.

Graham Kings, a former bishop, theologian and missionary, said this was a marked difference from 2008. Where Williams had attempted to hold the Communion together via an institutional covenant, Archbishop Justin had chosen to do so via relationships. Williams’ efforts to enforce unity by striking a common position and then binding each church into it via a written covenant failed in the aftermath of Lambeth 2008. Afterwards conservatives carried on preparing for potential schism while liberals steamed ahead, ordaining more and more gay bishops. Instead of using institutional measures, the archbishop has tried to cement Anglican unity by personally visiting every member church in the Communion in a bid to encourage archbishops and bishops to find their own personal common ground and reasons to continue together. And instead of desperately trying to find a compromise position on marriage which both American progressives and Nigerian traditionalists could each sign up to, Archbishop Justin decided to simply state there is no agreement on LGBT issues.

You may be forgiven for assuming that sexuality was the only item on the agenda of the conference. It was not.

Also discussed was mission, reconciliation, safeguarding, the environment and inter-faith relations. Organisers insisted these less fractious issues would dominate the discussions rather than the sexuality divisions, which the media was accused of being obsessed with.

But the outside world did seem to be solely interested in splits over LGBT issues, exemplified by the lesbian comedian Sandi Toksvig’s intervention, when she wrote a letter to the Archbishop of Canterbury midway through the conference expressing her anger at the reaffirmation of 1:10. “So, you and your other religious pals got together…and the main takeaway seems to be that gay sex is a sin. It was a sin in 1998 and you just wanted to make clear in 2022 that no one in your finely frocked gang has moved on from that. Seriously, with the state the world is in, that is what you wanted to focus on? You didn’t have other more pressing matters?”

Her letter could be evidence that until the sexuality fractures are resolved one way or another, the Anglican Communion won’t get a hearing on its priorities around climate change or evangelism.

Some commentators have argued the Communion has again patched over its differences without resolving them. Perhaps all this pragmatic middle ground approach will achieve is to kick the can down the road for Lambeth 2032.

It looks increasingly likely that Western churches both inside and outside the Communion will continue to liberalise over the next decade, while the Global South conservatives will continue to oppose any hint of revisionism.

Some wonder how there can be a future for an Anglican Communion so bitterly divided and believe a graceful separation would be best for both sides. Ian Paul noted many African churches found their fellowship with liberal pro-LGBT Anglican brethren actually caused them huge difficulties as their local reputations were sullied by association with perceived heresy.

But many Anglicans, including Archbishop Justin, resist such a conclusion and insist much would be lost in allowing the different Anglican churches to go their own ways.

Graham Kings recalled how the then-Archbishop of Canterbury had stood up for Desmond Tutu, the Archbishop of Cape Town, when he was under threat from South Africa’s apartheid regime. “You touch Tutu, and you touch the whole Anglican Communion,” Kings said. “So unity really is important when things get tough.”