Miles To Go Before I Sleep - Claire Gilbert 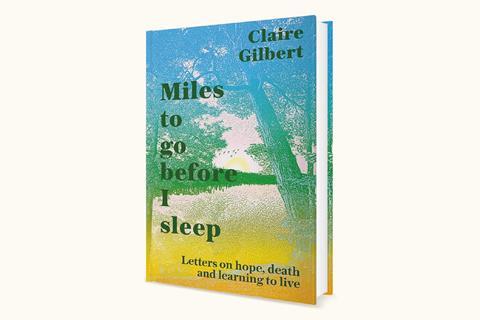 If you don’t want to know what it’s like to have cancer, don’t read this book.

If, however, you are interested in reflections on life and death from someone who has stood in the wrinkle of time where the two almost touch, it’s a great read.

Early in 2019 Claire Gilbert was diagnosed with incurable myeloma – cancer of the blood. She began writing letters to a group of friends in order to process what was happening to her. It enabled her to be honest with herself about her emotions and experiences, and perhaps to engage more fully with them as she sought to capture them on paper. Those letters make up this warm, witty, harrowing, captivating contemplation of disease, weakness, mortality and life.

The writing is literary, elegant and very beautiful, the book well paced and finely balanced. Its unflinching descriptions of Gilbert’s suffering are leavened with humorous observations and joyful delight.

Gilbert talks honestly of the fears, the tears and the things that help – poetry, music, nature, contemplative prayer. She quotes Julian of Norwich extensively, using the medieval mystic’s writings about the purifying power of entering into Christ’s sufferings as preparation for her own trials and sustenance throughout them. Yet for all that, the book is oddly empty of Christ at its heart.

It is a book about the resilience of humans, about people’s ability to reach the end of themselves and survive, but it isn’t about finding Jesus there. Gilbert seeks to embrace suffering for its own sake, not for the sake of glorifying God or even, unlike Julian, knowing Christ more deeply. In that sense this isn’t a Christian book. It draws on Christian truths, but only as options in a buffet, not as daily bread. Buffets have their place, though, and this is a nourishing one.