You are a leader (whether you like it or not)

I had been hosting The Leadership File on Premier Christian Radio for more than ten years when a guest said something about leadership that no one had ever said before.

Trevor Waldock had swapped work coaching stockbrokers and CEOs to become founding director of Emerging Leaders, which provides leadership training free to young people in some of the poorest nations in the world.

In the course of our interview he stated enthusiastically: “I believe everyone is a leader at some level of their lives.” “Everyone?” I asked. “Yes, everyone.”

Emerging Leaders had by then trained thousands of young people in various countries in Africa in leadership principles on the understanding that those who benefited would teach ten other people.

I asked whether they ever screened anyone.

“Not even those with mental health issues?”

“Well, it depends what you mean by health issues. But no, anyone is free to come if they want to,” Trevor confirmed.

Trevor went on to quote Howard Gardner, author of the book Leading Minds: An Anatomy of Leadership (Basic Books). Gardner defines a leader thus: “A leader is an individual (or, rarely, a set of individuals) who creates a story that affects the thoughts, feelings, and/or behaviours of a significant number of individuals.”

The ‘story’ Gardner has in mind concerns a narrative way of looking at reality. The leader describes the past, present and future and invites others to create the story together, based on a vision of a preferred future. Emerging Leaders uses the metaphor of the pen. We all have a blank page. What future are we going to write?

The more I thought about it, the more I realised how our assumptions about leading can too often mean we fail to support, applaud and celebrate the activity of leading that is being undertaken by many who have no leadership position as such. For example, the Christian in Year Five at school who gently cares for a newcomer so that other peers are able to include her, or the cheerful believer in the nursing home who takes a stand against the negative rhetoric and changes the mood of the community.

Too often we breed a culture that allows people to say, “I am not called to lead, that’s someone else’s job!”

“I don’t have the gift of giving” is not an appropriate response when the collection plate comes round, but too often we can have that same mindset in relationship to leadership. If there’s a problem, rather than asking how we can be a part of the solution our default can too often be: “I am not going to tackle it – that’s for the leader to do.”

Such thinking is counter to everything that Jesus and the apostles believed and taught about life and the need for his people to influence others by being salt and light wherever God has placed them. The ministries in Ephesians 4 were after all “to equip his people for works of service” (v12), not to replace the need for them. Having some who are specifically gifted in the area of leadership doesn’t disqualify everyone else from leading where they are.

The oft-quoted words, attributed to 18th Century Irish statesman Edmund Burke, bear repeating: “The only thing necessary for the triumph of evil is for good men to do nothing.”

And why do good people do nothing? Often because those in positions of leadership won’t encourage members to “do something”, or the members become experts at problem assessment rather than problem solving.

I believe we need to create a culture that celebrates the leadership initiatives that people take and encourage it to happen more.

The word ‘leadership’ has been variously defined, with classic definitions typically focusing on casting vision and gathering people around a common purpose. But I especially like John C. Maxwell’s definition, from his book Developing the Leader Within You (Thomas Nelson, reviewed on page 67):

“Leadership is Influence. Nothing More. Nothing Less.” That definition encompasses those in formal positions (pastor/vicar, CEO) and those who are not. Take a moment to think about those you influence on a daily basis. There’s probably quite a few.

Whether you currently regard yourself as a leader, or are still unconvinced, I want to encourage you to be the best you, which means leading (influencing others) that little bit more than you do at present. So we are going to look at the reasons why you need to be leading more, and then I’m going to give you some practical suggestions on how to do it.

My basis for assuming that there is a leader in you comes from the biblical notion that leading is part of the DNA of every human being. In Genesis we read that each person is made in the image of God (Genesis 1:27). While scholars have no consensus on what exactly that includes, it seems reasonable to assume that the context gives us a clue. In the very next verse God commands Adam and Eve to take care of the planet: “God blessed them and said to them, ‘Be fruitful and increase in number; fill the earth and subdue it. Rule over the fish in the sea and the birds in the sky and over every living creature that moves on the ground.’”

John Mark Comer wrote in his book, Garden City (Zondervan): “The word rule is radah in Hebrew. It can be translated ‘reign’ or ‘have dominion.’ It’s king language. One Hebrew scholar translated it as ‘to actively partner with God in taking the world somewhere.’”

So Adam and Eve were invited to rule – or lead – everything God created in the world. What if God has placed that same desire to lead within all of us?

I am not arguing that we should all go off and pursue whatever we want to, while failing to notice what others around us are doing. But I am suggesting that God has placed within you an instinct to matter. While observing life you may well have become concerned about something – an issue or injustice. There is a reason for that. So go on…Speak. Act. Converse. Do what you can, even if it seems small.

It’s what you were ‘born again’ to do

What if you could be trained to lead well by the finest leader who has ever walked this planet? What if you could have one-to-one mentoring to help you step into what you are learning? Wouldn’t that be good?

Of course, such training is wonderfully possible. The finest leader, Jesus, promises his Spirit to all who ask him. Maybe I am especially slow, but it was years before I realised that being a disciple of Jesus is effectively being part of a leadership training programme.

When Jesus told his followers to teach future followers “everything I have commanded you” (Matthew 28:20), he was developing a pattern for leadership training in everyone who comes to faith.

Of course, we have typically missed the point and assumed that only a tiny percentage of converts will ever graduate. But Jesus’ intention is that you obey all that he commanded. If you live as the apostles did, who grew in character and power as they followed him, don’t you think you might be ready to influence? Might I suggest that you won’t be able to stop yourself?

It may take a while. Many are far from ready, and have a ton of personal stuff to work through before being fully free to live the life Jesus calls them to. If you have read this article thinking about people who shouldn’t be leading anything, then it’s because they are still in process! Wouldn’t it be good to expect not only ourselves but also those we worship with to be able to lead others by example? Shouldn’t we expect to graduate into becoming disciple-makers sometime?

His spirit within is my living mentor and coach

Of course, the apostles occupied a particular time in redemptive history and had a specific role in establishing the Church straight after Jesus’ earthly ministry. But you would have a hard time arguing that the kind of character and power taught by the New Testament apostles is not for us today.

So this is the bit that can make us all, me included, uncomfortable. I can be tempted to live a belief-focused faith where I keep myself to myself, and don’t bother anyone. But I simply can’t do that and follow Jesus. His Spirit within is my living mentor and coach, urging me to support good and combat evil.

“Anyone who loves me will obey my teaching” (John 14:23). He asks you – and me – to look at the world, see what’s not going well and invite God to equip us for change so that: “whatever you do, whether in word of deed, do it all in the name of the Lord Jesus” (Colossians 3:17).

Once we are convinced that we are called to lead in some capacity, how are we supposed to make that happen?

Here are three questions for you to consider:

Many of the guests on The Leadership File would not have called themselves ‘leaders’ when they started off; they simply saw a need, prayed and got on and did something.

I think of Ann-Marie Wilson, serving as a nurse in Africa, who became aware of the need for education around the widespread practise of female genital mutilation (FGM) and so founded 28 Too Many (28 countries in Africa and diaspora communities practise it). The charity started in 2010 and is seeing good progress in its aims of eradicating FGM which is believed to have affected 200 million women and girls.

I am not so naïve as to believe that your mindset towards leading will be fully changed by reading one article. That’s why it’s called a mindset.

But I am confident that if this is a new idea for you it can become embedded in your thinking, because it’s how God has made you. He is involved as you start thinking about the world through his eyes. So, are you ready to accept the challenge to lead? 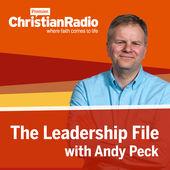 Andy Peck is host of The Leadership File on Premier Christian Radio (also available as a podcast) and is on the teaching team of CWR. He explores some of the themes of this article in his new book, The Leadership Road Less Travelled: Leading as God intended (CWR). Get a FREE copy when you subscribe to Premier Christianity magazine