The Gospel according to Minecraft

We’re all familiar with the image. The teenage boy, hiding in his darkened bedroom; the only light emanating from a flashing TV screen. On it, a character controlled by the boy is on a machine-gun rampage, in a warzone, or gangland, or maybe just the wrong part of town. The boy wears no emotion – just intense concentration – as the character he directs sidesteps flying bullets and returns fire with devastating effect.

The recent documentary In Real Life gives the stereotype a name and a face. Beeban Kidron’s film, which raises concerns about young people and internet-based media, introduces us to Tobin, a 19-year-old lad seemingly unable to admit his violent video game addiction.

Tobin plays for hours each day. That commitment comes at a high cost: after falling behind on university work because of his game time, he had to drop out of his course at Oxford. A young, promising life, apparently being wasted in a virtual world.

Running parallel to concerns about video game violence are worries about the amount of time gaming can consume. That’s not just an issue for parents; video games are played, in many cases religiously, by people of every age, gender and nationality.

Reports suggest that there are now around 500 million active online gamers worldwide, each investing around 13 hours on their screen-based hobby per week. And they’re only the ‘normal’ ones: there are also millions of ‘hardcore’ gamers, engaged online for between 40 and 100 hours a week.

Some hold down a day job just so they can escape back to the game world by night; for others, the virtual world has almost entirely replaced real life. Sociologist Edward Castranova says: ‘We’re witnessing what amounts to no less than a mass exodus to virtual worlds and online game environments.’

Jane McGonigal is one of the leading progressive voices on the future of video gaming. Her landmark book Reality is Broken identifies these major new societal trends and offers hope that the rise of gaming can make a positive change to the world. Her dream is that virtual environments might be harnessed to create new inventions, solve real-world problems and even discover cures for diseases.

Right now though, McGonigal argues, gamers are just people who’ve discovered a more compelling lifestyle in the online world. As video game avatars, they can be faster and stronger. Yet the ability to perform superhuman feats isn’t what hooks them in; it’s the sense that the game offers them purpose.

McGonigal writes: ‘Gamers want to know: where, in the real world, is that gamer sense of being fully alive, focused and engaged in every moment? Where is the gamer feeling of power, heroic purpose, and community? Where is the heart-expanding thrill of success and team victory? While gamers may experience these pleasures occasionally in their real lives, they experience them almost constantly when they’re playing their favourite games.’

Increasing numbers of people are finding the antidote to the frustration and emptiness of their real-world lives in video games, rejecting an authentic but disappointing world for one that has been engineered to make them happy. Digital culture expert Josh Jost also believes that gamers are searching for qualities that they lack in real life. He identifies these as ‘significance’ and ‘the belief that life matters’.

McGonigal concludes: ‘Unless something dramatic happens to reverse the resulting exodus, we’re fast on our way to becoming a society in which a substantial portion of our population devotes its greatest efforts to playing games, creates its best memories in gaming environments, and experiences its biggest successes in game worlds.’

"Gamers want to know: where, in the real world, is that gamer sense of being fully alive?" - @avantgame

Enter centre-stage Minecraft, the block-building game which has swept the globe in the past five years. In an age where hyperrealistic graphics can make you believe you’re watching a live football match only to realise that two teenagers are controlling the action, it seems bizarre that such a basic-looking, straightforward game could be so popular and influential. Yet just like Tetris in the early 1990s, the 35 million copies of Minecraft sold so far prove that sometimes the simplest ideas are the best.

Categorised as a ‘sandbox’ game (meaning it has open-ended, non-linear gameplay), Minecraft is essentially online Lego with infinite bricks. Players mine and harvest building materials, then use simple small blocks to create anything from a replica of their own house to an entire city. The different modes of gameplay allow this to be either a purely artistic endeavour, or one with certain risks: malevolent creatures called Mobs, and other traps can sabotage your buildings. In addition, the online collaborative modes allow for co-operation and competition; gamers can visit one another’s creations and choose to improve, attack or even dynamite them. 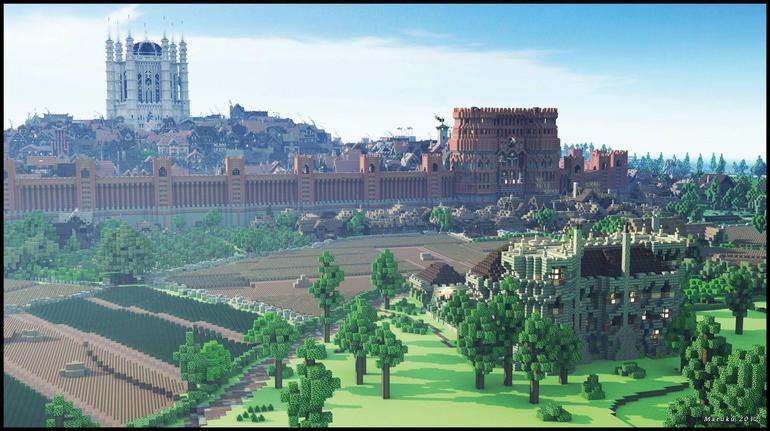 This epic scence from Game of Thrones was recreated with contributions from more than 100 builders. westeroscraft.com

Originally developed as a PC game by independent Swedish programmer Markus Persson, Minecraft now spawns various console versions, books, toys and clothing. Popular YouTube channels offer hints and showcase extraordinary examples of ‘Minecrafting’. Key to the game’s success is its relative ease to pick up and its open-ended gameplay style, meaning that with no specific ‘goals’, players can simply build whatever they choose.

Minecraft gives people a project to work on, a consuming passion and a sense of community and collaboration. It’s a huge online playground, where the only limits imposed are your imagination and the amount of time the real world asks you to spend away from the game.

Learning from the craft

How can the Church create a compelling offer to the world’s millions of gamers? How can we demonstrate that significance – and a relationship with a living God – can be found in the real world? A first step might be to take a closer look at the Minecraft appeal…

1. The graphics are terrible

Minecraft looks like a game from 1992. The deliberately blocky graphics give it a cool retro appeal, but that’s mainly a matter of convenience. The reason they look that way is that Markus Persson built the game himself, without access to an expensive graphics development team. He focused his energies on perfecting his central idea and creating simple but addictive gameplay. No one cares about the surface appearance of the game; perhaps that’s an important lesson for a Church that’s become increasingly concerned with cultural relevance in recent years.

2. You have to build everything ‘by hand’

Perhaps the most shocking element of the game is that, despite the extraordinarily beautiful and complex pieces of architecture that players create, every single block is individually placed. You can’t simply tell the game to ‘build a house’; you have to find the raw materials, then work hard to design and create. This process gives a sense of purpose and results in a feeling of genuine achievement.

An oft-heard critique of the modern Church is that we’re losing people not because we’ve made Christianity too difficult, but because we’ve made it too easy. Minecraft keeps players hooked precisely because it’s not a cushy number. It requires discipline and hard work, and that again fosters a sense of significance.

3. You’re free to build what you want

Here’s the most interesting aspect of Minecraft, and arguably the most important for the Church to understand. Unlike most traditional video games, it doesn’t tell you what to do. It asks – in some game modes at least – nothing of you at all. It simply gives you a framework for creativity, and the tools with which to create. It’s a new media version of the blank sheet of paper.

Markus Persson never expected huge ornate cathedrals and Escher-style impossible cities to spring up around the Minecraft world, but they did, as a new wave of artists and geniuses found an outlet for their immense creativity. Could the Church begin to look like that? Could we offer our people – not just our young people – a true blank sheet of paper for what our gatherings and our work as communities of faith could look like? Jost puts it like this: ‘Give them a cause; not the cause of self-fulfilment, but the cause to fill the earth with life. This is the mandate that Adam and Eve were given.’

Computer gaming can be fun, and in the case of Minecraft, can become a true art form. But when immersion in the game world becomes a more attractive option than real life, the Church needs to take note. Jane McGonigal famously said that in the gaming world, players can become ‘super-empowered, hopeful individuals.’ That should be our vision for church.

Hugely popular with children as young as five, Minecraft is creating dilemmas for pestered parents across the country, such as:

WHAT AGE IS MINECRAFT SUITABLE FOR? Console versions of the game have been given a suggested age rating of 10+ due to their ‘fantasy violence’. However this does not appear in the ‘creative mode’, which is essentially digital Lego.

HOW LONG SHOULD I LET MY CHILD PLAY FOR? Minecraft will consume hours of gameplay time if usage is unmonitored – so how much time should you allow? Jordan Shapiro, writing for American business magazine Forbes, says this is the wrong question. ‘These days most storytelling is interactive’, he says. ‘We consume most of our media through internet-connected devices’. Instead of switching off, he advocates ‘co-viewing’ and ‘parallel play’ – finding ways to play with or alongside your child and to talk about what’s happening on screen. And if you don’t like that answer, 30 minutes a day sounds about right.

IS THE MULTIPLAYER GAME ‘SAFE’? There are ways around this, but the unrestricted multiplayer game allows your child to interact with strangers – who can use whatever language they want through the chat feature. They may also wear ‘skins’ (graphical avatars for their character), which are inappropriate or even disturbing and they might try to knock down your child’s hard-built constructions. Short answer: not really.

How can we demonstrate to gamers that significance – and a relationship with a living God – can be found in the real world?