Meet the Christians getting arrested for saving the planet

Awareness of climate change is on the rise. This is in part due to the actions of the Extinction Rebellion, a group of peaceful activists prepared to get arrested and go to prison to protest the lack of action to cut carbon emissions and take seriously the threat posed by global warming.

In the vanguard of this movement are members of Christian Climate Action. These Christian campaigners have blocked entrances to government buildings, blockaded roads and glued themselves to the gates of Downing Street, in an attempt to urge those in power to take action. In 2015, members dropped a banner at General Synod, urging the Church of England to take its hundreds of millions of pounds of investments out of the fossil fuel industry. They’ve even received the backing of former Archbishop of Canterbury, Rowan Williams.

But who are the gentle souls behind this holy rebel alliance and what inspires them? Here are a few of them.

Phil, 83, is a pensioner from Bristol. As a former parole officer and mild-mannered university lecturer, he's not the first person you'd think of breaking the law. However, underneath Phil’s laid-back exterior is a determined man, who recently became a Twitter star when news spread that he had to be lifted from the road five times by police on the first day of the Extinction Rebellion, as he persisted in blocking traffic outside Parliament.

"I do this for my four beautiful grandchildren" says Phil. "I love them so much and so the thought of leaving them a broken world breaks my heart. I've heard it said many times that I'm too old to get involved in actions like this, but I can't just stay at home sipping tea when their future is crumbling away.”

Holly-Anna, 30, works for the NHS, assessing and treating individuals suffering from mental health difficulties. She has also worked for a variety of Christian charities including The Evangelical Alliance project Home for Good, which aims to support the church in fostering and adopting vulnerable children.

Holly is one of the group members who doesn’t get arrested. However, she plays an active part in protests, as well as the groups’ planning and coordination.

She says: “The sad reality is that this is a desperate time, and we need to respond fast to the state of climate emergency that we find ourselves in. It can be easy to feel overwhelmed, so it’s important to remember that we’re all just trying to love as best we can in the time we've got available around our other life commitments. I think the best thing about nonviolent direct action is how it brings together such different people into one church”.

Martin, 50, from Birmingham, is a Catholic priest and part of the leadership team for the Passionists in England and Wales. Martin believes that his Christian faith requires him to non-violently stand up to injustice – a principle which has led him to be arrested multiple times and spend six months in prison. During his time in prison, Martin intervened when a fellow inmate attempted to commit suicide.

"At a protest recently a policeman spotted my dog collar," says Martin. "He asked me how I can rationalise my actions being a Christian. I told him that I am taking part because I am a Christian. I relayed the story of Jesus in the temple – that he turned over the tables when he saw an injustice happening there. The policeman looked shocked and said that if Jesus had done that today he would have been arrested for criminal damage. People often feel uncomfortable with some of the principles that Jesus lived by and the fact that they led him to being arrested. For me the act of being arrested isn’t a goal. But it's where I often find myself when answering the question: ‘Am I being faithful?’"

Ruth Jarman's children are proud that she has been arrested

Ruth is a mother of three and works as an administrator and trustee in the Christian charity sector. Around this, Ruth plays in the worship band in her local Anglican Church and volunteers at the New Wine festival.

Ruth's dedication led her to being arrested five times during the first weeks of the Extinction Rebellion – the most of any protester. Ruth's daughter Helen has been inspired by her mother’s action. Helen, 19, says: “It's pretty cool having a mother who is on the front line of environmental protection, pushing for that tipping point in public awareness and engagement that we so urgently need. I watch her being arrested and feel proud. Protecting the environment is the human rights fight of the 21st Century. My generation needs to win this battle and the more parents who stop at nothing to protect their children, the better.” 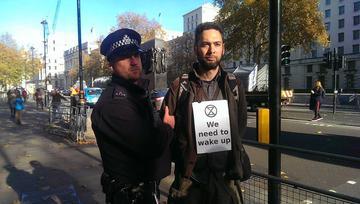 Nick Cooper is a university lecturer

Nick, 34, teaches shoemaking at Northampton University. He is a dedicated member of the group and sees climate change as a justice issue that is hitting the world's poorest the hardest. “Jesus always stood up for the poor and marginalised and we are called to do the same” said Nick. “If we look at the successful social justice movements of the last 200 years, it's only needed about 1-3 per cent of the population to bring about meaningful change. The time for convincing people of climate science has passed. We need those who believe to take action now before it's too late.”