Lisa Gungor’s new book may shock old fans, but they should read it anyway

Behind the music collective that is Gungor is a married couple, who have, in recent years, faced a lot of heartache and pain. Out of this experience has come a trilogy of albums written together, as well as a book by Lisa titled The Most Beautiful Thing I’ve Seen: Opening your eyes to wonder.

As someone who has hugely enjoyed their music, both live and in album form, I was keen to read Lisa’s book. I knew they had made some statements in interviews that had caused ripples in the Christian media, but I was most interested in getting a glimpse into Lisa’s life and writing.

The latter is breathtaking: while the style is a little ‘stream of consciousness’, Lisa is an evocative, beautiful writer who gently draws the reader in. She is also incredibly vulnerable and open – qualities that I hold dear and which helped me connect even more deeply.

The book is a book of journeys: from daughter to mother, from childhood to adulthood, from traditional evangelical Christian to a more fluid faith through deconstruction.

Lisa begins the book with a prologue, a letter written to her mother. She recognises that parents simply hand down what they know to their children, but, at some point, she rejected some of the absolutes her mother had taught her and they no longer understand one another. The book is her way of trying to explain how and why her perspective has changed – and the beauty that she has discovered as a result.

From dot to line to circle

The journey from dot through to circle is the structure Lisa hangs the book on. She begins with the concept of each of us being born on a dot – that’s where we learn the basics and our place in the world: “Your dot is the tribe you were born into, your vantage point in the world.”

Lisa then describes the process of being shaken off the dot, which she believes is like a disorientating battle – trying to command the dot to be still, but it won’t. Eventually you find yourself on a line, which you tentatively start walking along. Looking back at the dot reveals that it wasn’t a dot at all: it was “just the bird’s-eye view of this line. You had to change your perspective to see it.”

In the ‘line’ part of the book, Lisa shares the experiences in their early marriage and her first steps towards shaking off past beliefs, which had been based in the American dream and a deeply rooted Western mindset. She wrestles with God, saying that they “weren’t seeing eye to eye…There is too much pain, too much poverty and present hell.”

Describing faith like a sweater, she says: “…over the years, a thread comes loose and you try to just tuck it in” but eventually you decide you don’t need it anymore – the thread comes out easily and the sweater stays together. But over time “you pull another, and another, and soon you find all the yarn is gone. You have deconstructed the entire thing.” This is what Lisa says happened to her.

It is in the third part of the book that we read about the result: Lisa falls from the line into the unknown – the darkness, which she says is revealed to be a circle – the reality underneath and around the dot and line she had clung to up to that point. She describes it as disorientating; like a wounded animal at times, until she accepted her weaknesses and faced her fears. She talks of “hitting rock bottom, knowing what suffering is, feeling what love can do, and continuing to let both teach me in the years that followed”.

Each of us is influenced by those we interact with, and for Lisa there are three main figures that appear throughout the book: her mother, husband Michael and daughter Lucie.

The latter is central to the idea behind the book, as each section begins with a section entitled “Where the light comes in”. Giving birth to a daughter with heart defects and diagnosed with Downs syndrome shook Lisa to the core, forcing her to face her own insecurities, fears and selfishness. And, although there has been a lot of heartache too, the arrival of Lucie (whose name means light) has opened Lisa’s eyes to things she had never seen before (hence the subtitle of the book).

After Lucie’s birth, Lisa also faced the limitations of the systems our societies are based upon – made ever clearer by the fact that their daughter doesn’t fit neatly into them, doesn’t ‘measure up’ according to those ‘standards’. She explains: “herein lies a deep ache–to see my daughter’s value denigrated by statistics”.

Lisa already knew that she had been changing her perspective, but meeting Michael gave her freedom to express this. However this caused problems with her relationship with her mother because “she was still on the dot, and I was being shaken off”.

Lisa’s world was rocked completely when Michael announced one day: “I don’t think I believe in God anymore”. She describes how she wrestled with whether they could still stay connected if they weren’t in the same place (he “was a bit on the outskirts of atheism…dipping his toes into mysticism” while she realised she couldn’t be an atheist but also didn’t feel like she fitted in traditional Christianity anymore).

She shares that she felt cheated to begin with. Even though she had a lot of her own questions, she always thought they would have the basis of their belief in God – after all they sang about him all the time! But, eventually she realised that, again, her faith in organised religion was being shaken. She no longer felt secure on the line and she had days when she felt she had lost both God and her soulmate.

A place of acceptance

Lisa came to a place of accepting that they needed to be honest about their spiritual journey – how some days they believe and others they find it impossible – and it cost them in terms of friendships, family relationships, church and their music career, too.

On a silent retreat she realised that her line had been shaken, and it was time to let go. There she realised that pain and beauty go together in life. That it was okay for her and Michael to be on a different page.

She also began to embrace what she felt was a side of God people purposefully ignore and reject: mother. From this point onwards she mainly refers to Divine Mother rather than God, which, I have to admit, did make me feel rather uncomfortable at times.

She goes on to describe how, at the same time as dealing with Lucie’s heart surgery, the backlash from evangelicals about their shifting perspectives came thick and fast. They had to leave their church – and ended up moving to LA. But things do come full circle, and they found reconciliation – and a sense of solidarity – when visiting their old church again. They also began to find that many others were connecting with where they were at, both spiritually and with their experiences as parents: “We kept being honest about our journey even when it was painfully hard, and others began letting us know about their journeys.”

At no point does Lisa hold back, and the book is stronger for that. It was moving to read of their struggle with infertility, and then the beautiful gift of two daughters but the incredible pain that sometimes accompanied that gift.

I resonated with some of Lisa’s internal struggles, particularly her realisation that, however far she travelled in her spiritual journey, she still had not accepted her own worth. At this point, she begins another journey – of discovering what she feels about herself, but also her mother – and how their lives are interlinked.

While reading, I never got the sense that Lisa was trying to impose her own thoughts and ideas onto others. In fact I’m still not entirely sure what she believes now, although I found this statement towards the end fascinating: “If I truly believe this body and world are something to escape, I will only suffer. But if I believe I am looking at the face of God, I will stare in awe every time. It’s all in how you see it.”

You may not agree with everything Lisa says – she isn’t expecting that, but does encourage people to be open to learning: “This story is not a roadmap for everyone else. I’d love to have the answers – oh that would do a lot for my ego. But like I had to listen, you need to listen. Your teachers may not tell you the same things mine told me, and they will not be silent if you are patient and willing to find them in the most unlikely places.” 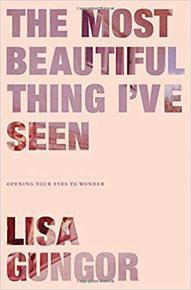 Some people may feel unsettled, be offended, or shocked even, by some of what she says, but it would be hard not to be moved by Lisa’s willingness to share the mixture of pain and joy in her own journey so openly.

Whatever personal response a reader may have to Lisa’s story, it may just nudge them to consider whether their beliefs are simply things they have inherited from their particular ‘tribe’, or whether they have truly understood and embraced them for themselves. It could just cause them to think a little deeper…