When Premier Christianity asked for stories of thriving UK congregations on our social media channels, we had a huge response. Reports of churches doing well don’t usually hit the headlines, but in villages, towns and cities right across the nation, there are many reasons to be hopeful.

Some groups are experiencing substantial growth, such as HTB’s church-planting network and Pentecostal denominations such as the Redeemed Christian Church of God, which now boasts 800 churches throughout the UK. But increase always begins at the local level. Here are three stories of individual churches seeing amazing growth in a variety of ways.

When Alex Harris arrived in Stafford, he was sceptical about pushing the Beacon Church towards a multisite model (he was put off by a past experience where the strategy had “crashed and burned”). But after meeting a congregation who were already passionate about reaching out to the community with the gospel, Harris has pressed ahead and seen significant results. Over the past five years, the Beacon has thrived under his leadership, growing from 70 to 500 people.

“In many ways I’ve not done anything other than catalyse what’s there,” Harris says, referring to the church’s “amazing mission-focused culture”.

But talk of church growth is often met with scepticism – why focus on numbers? And how much growth is due to Christians moving church, rather than non-believers coming to faith?

“I say to folk ‘we count people because people count’,” Harris replies, adding, “We’re confident a very high proportion is genuine Christian growth. We’re very rigorous in not allowing people who are in another church to come to us – to the point I’ve escorted people off the premises because they say they already go to another church!”

Today the 40-year-old pastor oversees seven services across multiple locations. With a focus on meeting people where they are, the church has a Wednesday lunchtime congregation on a technology park, and a newly launched ‘Pub-church’ once a month.

The vision is to have 20 congregations by 2020. But Harris is clear that the only reason he’s adopted this multisite model is because “It’s working…it wins people for Jesus.

“Churches don’t matter at all, they’re just the mechanism by which people are won for Jesus. When it stops working, we’ll stop doing it.”

Each congregation has an upper limit of 100 people. Harris says he’s trying to “have our cake and eat it” by marrying the benefits of small church (“intimate, relationally strong, your contribution matters”) with big church (“finances, staffing, influence”).

The dominant metaphor Harris uses for Church is that of an army at war. “It’s not language everyone is comfortable with,” he admits.

“We aren’t taking the church on a journey where there’s comfort. We don’t shy away from expecting people to live with a wartime mentality, not a peacetime mentality.

As the only paid elder of a fastgrowing church, Harris says he must carefully prioritise his time. This means often having to say no. “I don’t parachute in to rescue anything other than Bible teaching,” he explains.

This approach applies to his pastoral ministry too. “People will ring me up and say, ‘Can you visit me?’ If it’s not to do with death or adultery I just say no.

The emphasis on mission appears to be working for the Beacon. And Harris believes church leaders in general need to be “massively more risk-taking, dangerous and out there on the edge”.

“What’s the worst that could happen? Beacon Church goes bankrupt or goes bang? Ninety-nine point nine per cent of the Christians will start going to another church. But what’s the best that could happen? Twenty brand-new churches reaching 20 new demographics who otherwise would not be reached by 2020. The cost-benefit analysis is a no-brainer!”

SPAC Nation (the acronym stands for Salvation Proclaimers Anointed Church) began with just five Christians meeting in a council flat in Peckham. Ten years later, the church now regularly gathers 1,000 people on a Sunday morning, many of whom are young African-Caribbean millennials.

In explaining why this is, assistant pastor Rev Dapo Adegboyega says: “We are not a conventional church.

“God gave our senior pastor, Tobi Adegboyega, a unique vision and a heart to help and support people. In many of our services there are those who were in gangs and on drugs now on fire for Christ. They’ve had appropriate mentorship – that’s one of the things we’re heavily into.”

Rev Dapo explains young people with a criminal record feel “rejected by society” because after serving time in prison, it’s hard to find employment. That’s where SPAC Nation has helped. The church hasn’t just offered spiritual guidance, but practical investment. They say more than £2m has been given to individuals to help them start businesses.

“Every young person you see on the streets in crime or drugs – their main aim is to just make money. The moment you can give them an alternative to street life which still makes them money, you become their hero.

“These are guys who are talented and gifted but the system doesn’t give them a chance because they’ve been involved in crime. We don’t just pray for them, we seek practical ways to get involved, to invest in them. Many of them we send back to school, to university or provide housing for. This has become the hallmark for what SPAC Nation is about.”

Rev Dapo has many testimonies to share of lives changed: 18-year-old Sam was convicted of burglary and sentenced to four years in prison. After he was released, Sam found it difficult to find work and get his life back on track. He was introduced to Pastor Tobi and the two started what is now a highly successful recruitment business. The church say they have many ‘criminal to hero’ stories like these.

Rev Dapo believes the practical mentorship SPAC Nation provides is lacking elsewhere. Arguing that other churches have preached an “impotent” gospel, he says the Christian message should “empower people” and have relevance to a person’s finances, career and community life.

“It’s not just about coming to church and hearing the word of God. The word of God is supposed to produce results and lead to something,” he says.

But the leadership’s focus on business isn’t the only unusual aspect of the ministry. The church doesn’t currently have a fixed location, instead meeting in different venues each Sunday. They’re describing themselves as “on tour”.

When asked why they’ve adopted this model, Rev Dapo replies: “We believe the church is supposed to be dynamic and not just in one place, locked up 95 per cent of the time and only used on a Sunday morning. And we believe there is a lot of harvest around London. In the last six weeks we’ve been in Hackney, Shoreditch, Bankside, Croydon, Westminster and Chelsea.”

We don’t just pray for them, we seek practical ways to invest in them

When pushed, Rev Dapo admits the church would like to have buildings in the future. But he believes the church has been right to prioritise financial investment in people, rather than places. “We want to build lives, not buildings. Christianity is about life, not a building.”

When Linda Maslen started volunteering at her local foodbank, she had no idea that it would culminate in her becoming an ordained vicar who leads one of the fastest-growing churches in Yorkshire.

It all started when the Christians volunteering at the Halifax foodbank began to offer to pray for people. People would often request prayer for miraculous provision or physical healing.

“The amazing thing about praying in that environment was you could pretty much guarantee God would answer those prayers,” Maslen recalls.

“People would come back and asked to be prayed for again! And naturally people would say, ‘Who is this God?’ So we’d share our faith.” As people became Christians, Maslen would take them to local churches. But it didn’t go well.

“We assume people know when to stand up and sit down. We assume that people know not to answer preacher’s rhetorical questions, let alone with the language you might use on the streets! We sing the songs set for us. We don’t bounce up and say, ‘I don’t like that song, can we have a different one?’ All of these things happened when we took people to church.

“We also realised the language Christians use is completely different – ‘mercy’, ‘grace’, ‘confession’, ‘sin’. They aren’t normal words. Even though our congregation loved that we were taking people in and lives were changing, the relationships were really difficult. You had people who had been living really chaotic lives.”

Various attempts to encourage these new Christians into existing churches were trialled, but they all failed. Later, at the New Wine festival, Maslen had a vision for a new form of church. Out of this came what’s known today as the Saturday Gathering.

Explaining the format, Maslen says: “We would only ever talk about Jesus. We would gather around food because we knew our people were often hungry. And we would use modern worship songs that led to an encounter with God and a place of peace. We found through the worship God would heal, restore and renew.”

Six people came to the first meeting. A few weeks later, numbers were reaching 30. Maslen recalls: “It was chaotic! There were times when you wouldn’t know if it was the Holy Spirit’s power or drugs and alcohol. It was noisy; people would wander in and out. People would go out for a smoke halfway through the talk.” 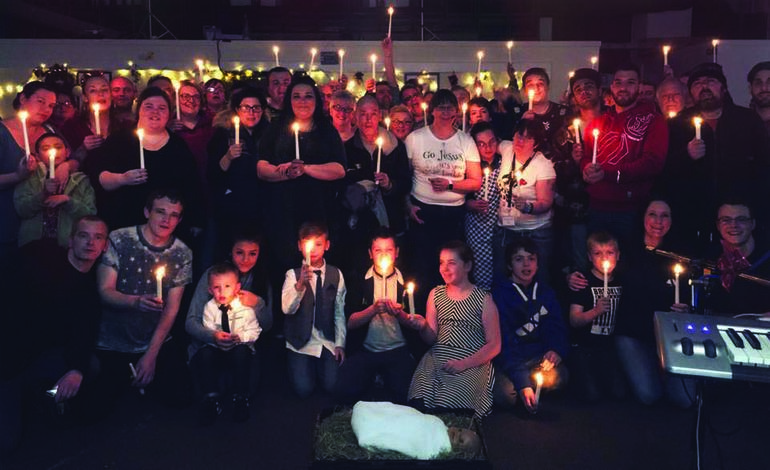 Despite these challenges the Saturday Gathering has grown dramatically over four years. Maslen and the team have baptised almost 150 people and launched two extra meetings.

“Our growth strategy is we plant out in the community and look for people who are not in church. We are not interested in people moving from a church to us,” Maslen explains.

Just six weeks into the project, Maslen was offered funding by the local police. “They recognised, even at that early stage, we were taking people who were difficult off the streets on a Saturday night, which was making their job easier.

The team have baptised almost 150 people

“A little while after that the council said, ‘How can we help you?’ We now have a building which the council gives us for £1 a year! In the winter we run a shelter in the basement and on the ground level we have a commercial kitchen and café area for ‘pay as you’re able’ café three nights a week. We’ve also got funding for three part-time support workers.”

Today, the Saturday Gathering officially operates as an ecumenical ‘Fresh Expression’, which Maslen has oversight of as part of her role as an ordained Anglican minister.

Looking back to when she was simply praying for people in the foodbank, Maslen says: “The thing that made me stop and question was I could be praying for someone who had a slipped disc in their back on the Saturday at the drop-in. And as you prayed you could see God heal it. But I’d go to church the next morning and pray for the exact same stuff for somebody and it didn’t get healed.

“Theologically you think, ‘What on earth is going on here?’ I don’t think God cares any less for any of us. But there’s such a softness in his heart towards the people who are brokenhearted and those who are at the bottom of the pile. When we ask for his intervention for those people, he can’t wait to heal those people and touch them.”