During a single week last November, 126 million Americans voted for their President, 1.3 billion Chinese were informed about their new politburo leaders, and 60 million Coptic Orthodox believers had the identity of their new Pope revealed to them when a blindfolded boy picked his name from the three laid on an altar. It was a quirk of timing that highlights the different ways that nations and churches are governed.

Leadership styles divide the Church now more than ever. While the Coptic Church appoints leaders by copying how the 12th apostle was picked after Judas’ death (Acts 1:23-26), other churches rely on either voting by members (to varying degrees) or on the decision of existing leaders. This difference creates a dividing line which cuts deeper than theology, because of what it says about the value of individual members. It also creates a division between denominations which is difficult to bridge.

The Catholic and Orthodox churches are at one end of the spectrum, having strict hierarchies and a ‘top-down’ chain of command. At the ‘bottom-up’ end are churches such as the Mennonites who prefer to keep discussing until a unanimous vote is possible. Between these extremes are a huge variety of leadership structures. Interestingly, the Muslim world is divided on this same issue: Shi’ites are governed from the top by an ayatollah, whereas Sunni mosques are independently run by their congregation and local imam. The Church occasionally attempts to overcome such divisions. In 1972 the Congregational and Presbyterian churches of the UK decided to unite because they were theologically identical in almost all respects except church government: Congregationalists voted on all big decisions, while decisions were made by the Presbytery (regional elected elders) on the Presbyterian congregation’s behalf. The two denominations merged to become the United Reformed Church (URC) with the agreement that congregations voted on local matters, while the elders voted on regional and national issues. This was hailed as a significant reversal in the Protestant tendency towards divisions and subdivisions. Unfortunately several congregations from both sides disagreed with the compromise, and refused to be a part of the URC. 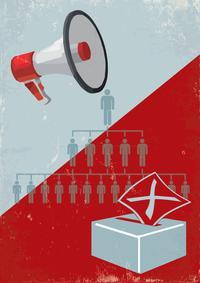 As with most church divisions, disagreement about leadership largely occurs because of scripture’s lack of clarity on the subject. The New Testament names several titles, many of which we still use: deacon (Greek ‘servant’; Latin ‘minister’), elder (Greek ‘presbyter’), bishop (Greek ‘overseer;’ Latin ‘episcopus’), shepherd (Latin ‘pastor’) and apostle (Greek ‘messenger’). The term ‘apostle’ isn’t used much today because it referred to the Church’s founders and occasionally to actual ‘messengers’ (Philippians 2:25; 2 Corinthians 8:23). ‘Shepherd’ is used only once for people other than Jesus and appears to be a role rather than a title (Ephesians 4:11). And according to Acts, ‘elders’ are the same as ‘bishops’ (20:17,28).

This leaves two main types of early Church leaders: deacons and elders/bishops. We might want to conclude that this demonstrates clearly what the standard leadership structure of the early Church was. But, if this was the case, we would expect the two types to occur regularly together whereas, in fact, deacons are mentioned just once with elders and once with bishops (1 Timothy 3:1-13; Philippians 1:1). The only clear pattern in the Bible is that deacons occur mostly in Paul’s writings and elders occur mostly elsewhere.

The likely explanation for this confusion is that church governance was still evolving in New Testament times, so that different terms and structures were used in different times and places. By the end of the first century, however, writings such as the Didache and First Clement clearly reflect a dual structure of deacons and elders and, a little later, Ignatius assumes that several elders submit to a single bishop.

Which system works best? Both appointments from the top and voting by church members can produce heroic and also disastrous leaders. When the elderly John Paul XXIII was appointed as a caretaker Pope in 1958, no one predicted that he would put in motion the most important modernisation of the Catholic Church. Vatican II encouraged lay involvement in worship and Bible studies, the use of modern languages instead of Latin and replacing confessionals with collective prayers. The current head of the Russian Orthodox Church, Patriarch Kirill I, has a rather different track record. When he was seen wearing a $30,000 watch in a website photograph, he denied it was true, and certainly the watch was no longer visible when people rechecked the site. However, the highly reflective table at which he was sitting in the photo retained a clear image of the now missing watch. (Google it!)

Democratic church governance can go just as badly wrong. Just before the calendars ticked over from 1999 to 2000, one pastor was voted out of his job by church members who complained that he refused to preach warnings about the coming world disaster called the Millennium Bug (remember that non-event?).

My own selection for the ministry was not, I hope, typical. When the Baptist college I applied to asked my minister if he recommended me, he took the question to the church meeting. Being relatively new in the area, not many church members knew who I was. However, at a recent church party I had organised a game where the winner was the person able to pronounce the words ‘chubby bunnies’ with the most marshmallows stuffed into their mouth. So the church meeting was asked: ‘Do you recommend David for the ministry? You know ? the one who did chubby bunnies?’ All their hands went up. Hmmm…

Nevertheless, ballots are a good way to help the silent majority have their say, and hopefully to let common sense outweigh improper influence or extremism. The Bible affirms the concerted opinion of the body of believers. According to Jesus, the whole congregation should be the final arbiter in matters of Church discipline (Matthew 18:17). And the first deacons were chosen by the body of believers, not by the apostles who appointed them (Acts 6:1-6). There is even a hint in Acts 14:23 that elders were elected by the congregation: the word which most Bibles translate as ‘appoint’ is actually the normal Greek word for ‘to vote’.

Personally I prefer to use some system of voting by the congregation. I especially like the double-vote system, as it encourages unity. In the first vote, everyone supports whoever they prefer. In the second vote, everyone considers whether God was speaking through the majority, and whether they could affirm that choice. This often results in a unanimous vote…which is a wonderful way to start a ministry.