One of my intellectual heroes was a racist, which is something of an embarrassment to me and others who hold him in high esteem. It is hard to deny that he held views that are both wrong and revolting, such as when he “reasoned” that: “So fundamental is the difference between these two races of man, and it appears to be as great in regard to mental capacities as in colour...The blacks are very vain but in the Negro’s way, and so talkative that they must be driven apart from each other with thrashings.”

The man in question was Immanuel Kant (1724-1804), by common consent the greatest philosopher of the Enlightenment, a period in which reason, democracy and the rise of modern science began to permanently shape the Western world. The term ‘enlightened’ came to be synonymous with the pursuit of knowledge and the abandonment of superstitious thinking.

Kant was the standard-bearer for this new human-focused age, yet his epithets could adorn any website run by a new atheist provocateur today. He proclaimed: “Enlightenment is man’s emergence from his self-incurred immaturity” and challenged people to “Dare to Know!” In the light of which, the whole racism thing is a bit ironic, really.

I begin with Kant partly because he is the only Enlightenment figure that Harvard psychologist Steven Pinker, whom I recently debated (see below video), references with any frequency in his new book, Enlightenment Now: The case for reason, science, humanism, and progress (Allen Lane). And partly because he illustrates precisely what this article is about: our inability to live without myths.

Indeed it turns out that whether you’re an Enlightenment philosopher, a modern ‘new’ atheist, or even a religious believer, you are just as likely to believe in myths and even fairytales as anyone else.

Flaws in the Enlightenment

The same point can be made of other luminaries, such as the Scottish philosopher David Hume and the icon of the French Enlightenment, Voltaire, who both made similar judgements about the inferiority of Black people. Such views may have been the norm at the time, but so was Christianity. Yet none of these thinkers - Hume, Kant or Voltaire - regurgitated that.

There are a number of simple (but erroneous) responses to this kind of Enlightenment racism.

One goes something like: this just shows how bigoted some of these great intellectuals really were. Another says: this just goes to show how fake the whole Enlightenment phenomenon was. Yet another says: this simply illustrates what happens when you reject Christian morality and turn to human reason.

None of these responses will do. However much it was accompanied by some powerful (and often pertinent) anti-Christian polemic, the Enlightenment marked a significant intellectual step forward. It really did let some light in.However, like all significant and serious historical phenomena, it was a complex, contradictory and ambiguous movement. Its most dazzling thinkers justified both human equality and racism on ‘rational’ grounds. Its leading political powers worked to liberate some people, while simultaneously turning the slave trade into a global market that destroyed millions of lives.

When it comes to the Enlightenment, Steven Pinker, whose discipline of cognitive psychology teaches him the dangers of unconscious bias, stumbles. He turns a complex, contradictory and ambiguous movement into a myth that serves his own atheist worldview.

I enjoyed debating Pinker on The Big Conversation and benefited from reading Enlightenment Now, which makes a persuasive, quantitative case for the world generally becoming a better place due to modern technology and moral progress. However, we parted company on where this progress comes from.

In Pinker’s view, it is the Enlightenment, pure and simple. Before 1750, humans lived in darkest ignorance and barbarism; afterwards, it was light and reason. Atheism’s fairytale prince had mounted the steed of reason and science to slay the dragon of religious superstition and ignorance. But this is Enlightenment as myth rather than Enlightenment as history. 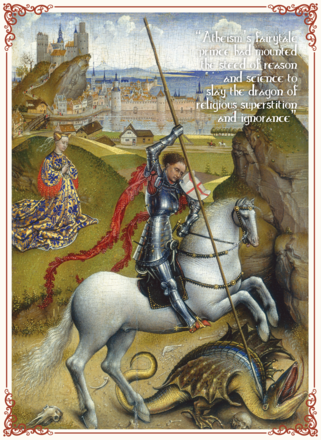 No one is denying that the world owes a debt to Kant, Hume and Voltaire – not to mention the many other intellectuals who marked that period. But to imagine that no good thing can be traced to anything but the Enlightenment is unsustainable.

I made that point to Pinker in our debate. We tussled over various facets of what the Enlightenment supposedly gave us, including modern science and human rights. I challenged him that each of these has their foundations much further back.

I pointed out that the scientific revolution was birthed by believers. Pinker retorted that their faith was incidental, since Christendom was “the water they swam in”. Yet for Newton, Bacon, Kepler, Copernicus, Robert Boyle and a host of other scientific innovators, it was their theological beliefs about God’s ordered creation that explicitly legitimised their study of the universe.

When it came to the question of moral progress, Pinker stated that the Universal Declaration of Human Rights was created with “not a shred of Christianity”. Yet the document was primarily drafted by Charles Malik, a Lebanese Christian. Its language draws heavily on Catholic social teaching about personhood that goes back to the universal precept that all humans are made “in the image of God” (Genesis 1:27).

Indeed, I have argued in The Evolution of the West: How Christianity has shaped our values (SPCK) that most of the institutions and values we hold dear, such as human dignity, the rule of law, human rights, science and even, paradoxically, atheism and secularism, were made possible by our Christian history more than the Enlightenment.

The power of myth

Humans are myth-making creatures in the sense that we tell and believe stories that we think have deep significance.

Medieval European Christians used to believe in a figure known as Prester John. He was a legendary Christian ruler, whose kingdom was located somewhere – no one knew where – south-east of the Mediterranean. There was an element of truth in the story, insofar as European Christians were vaguely aware of the Church of the East, allegedly founded by St Thomas, but then cut off from the rest of Christendom by the rise of Islam in the seventh Century.

The story of Prester John was not really a historical account of the emergence and isolation of so-called Nestorian Christians, however. Rather, it was a myth about a rich kingdom, populated by marvellous creatures and ruled over by a powerful and heroic Christian monarch who would one day return to reunite Christendom in triumph. In its own way, the myth was not so different to the British story of King Arthur, who became a legend of power and promise many centuries later.

It seems that no matter where or when we live, or how rational or educated we are, we cling to such myths. Sometimes – like Prester John and King Arthur – they are local and easily grown out of. Sometimes, like the Enlightenment myth held by some atheists, they are universal and rather more serious.

1. The myth of progress

Favoured by many modern people who find security in the belief (on a par with any religious faith claim) that things will inevitably get better. Not all secularists think this way, of course. John Gray, one of the best known atheists writing today savagely criticises the Enlightenment myth. And Steven Pinker, to his credit, is also aware that things can also go in reverse.

2. The myth of human rationality

Faith in human reason and self-interest has shaped far too much modern economics, driven by the belief that we humans always know what is best for us and are good at calculating how to go about achieving it. The banking crises of the early 21st century are salient reminders of our hubris.

3. The myth of fundamental human goodness

Especially favoured by those of an atheist humanist persuasion who are convinced that there is no God, ultimate purpose, or afterlife, yet are determined to maintain a commitment to fundamental human dignity and purpose at the same time.Yet when you look back at human history (or watch the daily news) it becomes hard not to believe that the whole story is a mess without purpose or redemption. To circumvent this fear, you need to convince yourself that the only reason we are in it in the first place is because something – ignorance, poverty, religion – is corrupting our basic human goodness. The idea that there is something fundamentally wrong with the human character is too worrying to contemplate.

Myths are not necessarily bad, nor are they the same thing as legends – things that people believe happened but actually didn’t. CS Lewis described Christ’s death and resurrection as the “true myth” – a powerful idea expressed in many cultures and epochs, but made manifest in the Jesus of history. The question is not about whether we should have myths or not, but whether the myths we hold are more or less credible, and more or less humanising.

Christianity is based on a series of myths in this sense. Creation, Fall, incarnation, atonement and redemption are all myths – powerful stories based on some things that really happened within history (Jesus’ life, death and resurrection) and some things that didn’t, yet which contain important meaning (creation in six days, two people eating a forbidden fruit). These myths explain – in an existential rather than scientific sense – the way the world is; in other words, they help humans live truthfully and well within creation.

There is no single comparable atheist set of beliefs and myths. Some atheist worldviews are utopian, some are nihilist, some are utilitarian, some are humanistic. We do better to talk of many atheisms rather than atheism.

Having said that, a number of features keep coming up time and again, whether they be about essential human goodness and rationality, the inevitability of progress, the importance of the Enlightenment, or the wickedness (or at least stupidity) of religious belief. As with all myths, whether they are religious or atheistic, they are difficult, sometimes impossible, to disprove in any comprehensive or scientific way.

Undisprovable maybe, but some myths flourish and some myths die, either because they fit lived reality or they don’t. For my money, the Christian myths fit our understanding and experience of life a whole lot better than the atheist ones do.

What we do know is that believer and atheist alike still use myths to frame the world we live in. Personally, I find the Christian story serves as a remarkably coherent framework for our beliefs in intrinsic human value, the fact we can probe our ordered universe, and the ultimate hope that faith delivers for so many.

So maybe the question is: whose myth looks less like a fairytale?

Watch Nick Spencer in conversation with Stephen Pinker on the second episode of The Big Conversation at thebigconversation.show