The Christian entrepreneur behind the UK’s favourite jam 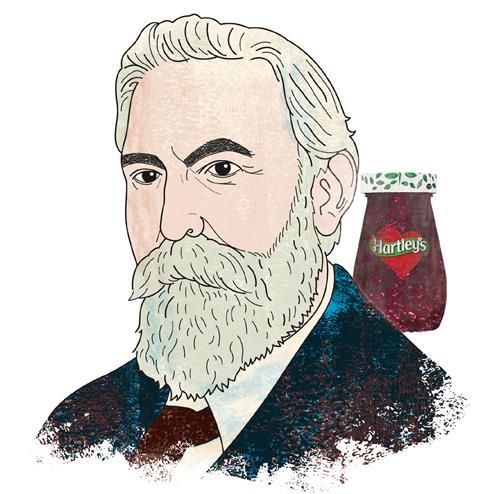 Sir William Pickles Hartley was one of the foremost entrepreneurs of his generation. His jams, marmalades and jellies were renowned, gracing the table of King Edward VII and accompanying explorer Robert Falcon Scott on Antarctic expeditions. But it was Hartley’s deep Christian faith that inspired both his business ethics and his practice.

Hartley was born in 1846 in Colne, Lancashire. His father, John, was a tinsmith while his mother, Margaret, ran a small grocery. He was brought up in a loving Christian home and attributed his faith to the godly influence of his parents, grandparents and Sunday school teacher. The Hartley family worshipped at the local Primitive Methodist Church in which Hartley eventually served as organist, Sunday school teacher and treasurer.

Although his parents had limited means, they denied themselves the extra income Hartley could have brought into the home had they sent him to work and, instead, enrolled him in a local elementary school. At 13, he progressed to Colne Grammar School.

His business career began at 16 when he was given free rein to run Margaret’s grocery. He quickly expanded the business by adding a saltery, in which customers could buy ready-salted food or have their own food salted to prolong its life, at a time when no refrigeration was available. He also began a wholesale service to local retailers. His reputation for integrity earned him a growing clientele and his wholesale operation was soon one of the largest in the county.

THE START OF AN EMPIRE

In 1871, Hartley’s jam supplier became unreliable. With no other source of supply, Hartley’s career took an unexpected direction. With a workforce of just twelve people, Hartley produced his first 100 tons of jam. It quickly established a reputation for purity and fine taste, free of dubious ingredients such as turnips, often used to boost the weight, and carrots, a cheap sugar substitute.

As demand grew, he gave up wholesale to concentrate on jam production, relocating with his wife, Martha, and four daughters to Bootle, close to fruit-growing farms, the sugar refineries of Liverpool, the Mersey docks and a major railway line. The move met with fierce resistance: “This was against the advice of my family and friends who viewed the step as an expression of vaulting ambition. They all believed I was flying in the face of Providence and prophesied disaster. There was no exception to the adverse criticism.” He wrote that he “never felt so alone”.

There were many setbacks. Shortly after the move his youngest daughter died, aged just 19 months. Because of a large loan that he had taken out to fund the new works, there were continual financial pressures. It was a great struggle to make ends meet and Hartley worked long, hard hours.

Whatever pressures he experienced, his faith in God remained firm: “My daily prayer is that God will show me what he wishes me to do. I only want to see clearly his guiding hand, and I am daily asking him to lead me.”

The depth of their Christian faith was evident when Hartley and his wife resolved to always give away at least 10 per cent of their gross income “for religious and humanitarian work” and to increase their giving in proportion to any increase in income. In view of their situation, this may have seemed illogical but, as Hartley later explained: “When we think of the life and sacrifice of Jesus Christ, then nothing we can do is too much.”

Hartley honoured God by maintaining the highest standards of production. In order to guarantee the quality of his jam, he sampled each boiling and inspected up to 1,000 pots at a time. To assure his customers that his products were trustworthy he adopted a lighthouse as his trademark, a Christian symbol of trust and safety.

Demand for his jam continued to soar. In 1885 he moved his operations from Bootle to a larger site, a few miles away, in Aintree. In 1901 he opened a factory in London to meet the ever-increasing demand in the south of England. By this time, he was also exporting to markets in the USA.

Hartley’s care of his employees was exemplary. At a time when factory working conditions were often unsafe, and the welfare of workers unconsidered, Hartley’s factories were well ventilated. Wholesome meals were served at cost price in the staff dining room. If he noticed that a task was physically challenging, he would ask: “What can be done to take the hardness out of this job? Never mind the cost.” When he found a truck in a newly-delivered batch too heavy to push himself, he immediately ordered: “Scrap them!” He built a model village next to the factory, ensuring employees had healthy living conditions. Each house had a front garden and running water, which was a great luxury at the time. Despite the superior quality of these homes, the rent was minimal. Hartley did not want to make a profit from his workers.

Hartley also considered his employees equal partners in a shared enterprise, and introduced an annual profit-sharing scheme accordingly. Other manufacturers were intrigued by this, thinking it must have hidden commercial benefits, and approached Hartley for details. He told them: “Profit-sharing is over and above a fair and just wage and is given, not because I think it pays commercially, but because it seems to me right and doing as I would be done by.” They quickly lost interest.

The purpose of his life, Hartley said, was to “serve the Lord every day to the best of my ability”. He put this into practice by faithfully following his own clearly stated precept: “We followers of Jesus Christ must carry into our life his spirit and teaching, and that whatever we think Jesus Christ would have done had he been in our place, whether we are employers or employed, whether we are in business or out of business, that we are compelled to do.”

The phenomenal sales of Hartley’s Jam made Hartley immensely wealthy, but he always called his money “the Lord’s money”. He stressed: “It is the first duty of those who have money to remember in a liberal manner those who have not. Where much is given much is required.”

He gave huge amounts of money to medical research, for education, for the construction of hospitals and homes for the elderly poor. He also helped individuals in desperate circumstances, setting up a network of trusted friends to inform him of cases of dire need. He never questioned his friends’ judgement; he only ever asked if the amount they recommended was actually enough.

By 1908 Hartley was recognised as one of the country’s leading philanthropists and, that year, he was knighted by King Edward VII.

THE OUTBREAK OF WAR

On the outbreak of the first world war the chancellor of the exchequer, David Lloyd George, formed a small group of the best business minds in the country to advise him on critical financial matters. Hartley was one of them.

Gifted though he was with a sharp mind and acute financial acumen, Hartley could not escape the pain and hardship of the conflict. He was overwhelmed with grief when his grandson was killed on the Somme. On a business level, he wondered if his company could survive the huge shortage of labour and materials that the war produced.

Despite these pressures, the public noticed that his jam maintained its pre-war quality and that his prices were not raised to meet increasing costs. He also continued to be a generous benefactor, funding hospitals and humanitarian organisations and supporting the families of any of his employees serving in the armed forces.

However, the strain of the war years had a lasting effect on his health, causing him frequent angina attacks. For four years after the war’s end in 1918, he continued at the helm of Hartley’s Jam in a limited capacity but on 25 October 1922, at the age of 76, he suffered a heart attack and died.

Hartley’s death made national news. In church and chapel services across the country, congregations paused to reflect on his life and passing.

Today, fame and fortune often define a person’s worth. Hartley would no doubt be admired for establishing a brand that made him enormously wealthy, and continues today – even 150 years on. But wealth was unimportant to him. Instead he would have wished to be remembered as someone who measured up to the high standards he set for himself: “I am much exercised as to whether I am such a disciple of Jesus Christ that my work people, my business friends, my neighbours and my family can constantly see the Spirit of the Master in my actions.”

“This is the secret of all true success: the consecration of ourselves to Him who loved us and laid down His life for us.”

“Religion is not only a thing of the Church, the prayer meeting or holiness conventions; it is all these things but a very great deal more. It is a thing of the factory, the workshop, the mine, the office; in a word, it is a life to be lived.”

“Our aim has always been to win the confidence of the public by making the best possible article and selling it at a fair price.”

“When we descend from the heights of ecstasy and poetry down to our hard, everyday, matter-of-fact life, then is the time to keep our lamp alight that the world may see our good works and glorify our Father which is in heaven.”

“I do not say that voluntary profit-sharing is a solution for all labour problems, neither do I claim for myself any special credit. I simply try in some measure to carry out the teaching of Jesus Christ.”

Peter LupsonPeter Lupson is the author of Thank God for Football! (SPCK) about the church origins of famous English football clubs and In God’s Company (DayOne) about Christian giants of business who established world-famous companies. Both books have been the subject of TV documentaries shown worldwide