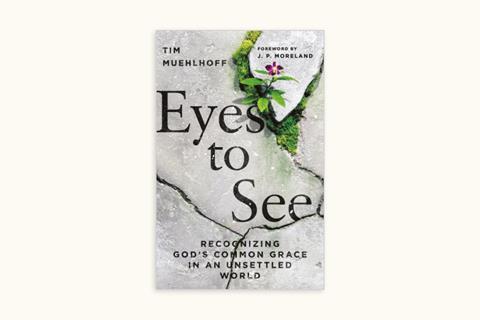 The goal of Eyes to See, as Muehlhoff states, is to recognise that “all good gifts come from God”, to paraphrase James 1:17. His argument is that God’s handiwork is all around us and, if we can see and better appreciate it, it will enhance our faith and create opportunities to share God’s love. Divided into six chapters, the book looks at themes such as communication, inventions and discoveries, art and the human condition, and how God can be seen in each.

It’s an easy read but, overall, the arguments were not convincing. This was particularly true of the chapter on war, which argues God’s common grace can be seen in human attempts to lessen the impact of war, such as the Geneva Convention or the founding of the Red Cross. While this is undoubtedly true, it feels like a partial answer to an unfathomably difficult question; one that could be a whole book in its own right.

Emma FowleEmma Fowle is assistant editor of Premier Christianity and editor of Voice of Hope, Premier's quarterly devotional magazine. Emma is a trustee for Christian festival Creation Fest and lives in Cornwall with her husband and two teenage daughters. She loves to read, swim in the sea, play netball and lift weights with her dad.
<