A Most Peculiar Book - Kristin Swenson 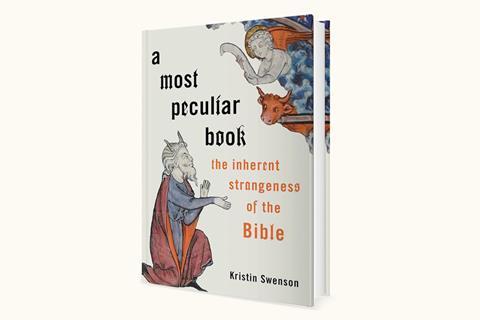 There’s much to like about A Most Peculiar Book. Kristin Swenson writes entertainingly, with only the occasional lapse into the sort of academic language that makes reading most theology books like wading through treacle.

The ‘peculiar book’ is the Bible, and Swenson gleefully dissects its complicated publication history, internal tensions, contradictions, complex moralities, baffling assertions and equally baffling silences. Some believers, Swenson says, simply explain these features away, while “nonbelievers use them as a reason to dismiss the Bible entirely”. Instead, she argues, we should embrace the fact that the Bible is full of holes. We should read it “more as participants in meaning-making than consumers of absolutist declarations”.

However this sounds to a certain kind of evangelical, it would be a mistake to see this as just another liberal hit-piece. Swenson “loves the Bible” and takes it seriously; she just wants us to acknowledge that it’s not a simple book.

It’s fair enough to expose the Bible’s difficulties, though it becomes rather wearing after the first few chapters. Does the author really think that no responsible preacher or reader has struggled with these questions before? We wrestle with this stuff all the time. Almost all Christians read the Bible through the lens of faithful discipleship and Church teaching. That’s resulted in some perfectly reasonable ways of reconciling contrarieties, which help us receive the Bible confidently as a gift.

Swenson doesn’t set out to be negative about the Bible but the overall impression her book leaves is that most of what you thought you knew is wrong, and that to read it intelligently you ideally need to be fluent in biblical Hebrew. That’s rather a pity.