It’s five years since the fire at Grenfell Tower killed 72 people. In the aftermath of the tragedy, volunteering to support the emergency workers at the site had a profound effect upon Gail Millar, ultimately changing the course of her life 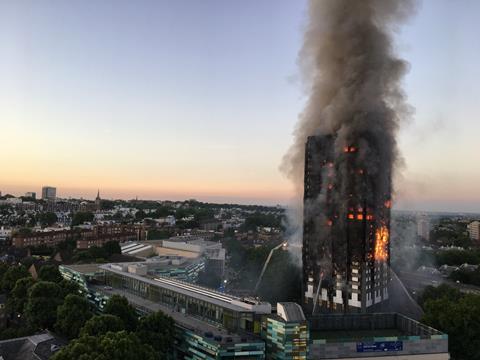 While working for a Christian charity as an older person’s specialist, a call came through asking for volunteers to help at an emergency situation in west London. I happened to be in the area that day so, after approval from my line manager, I replied to the call. As I made my way through the inner cordon of the Grenfell tower disaster, there were more police and fire engines than I had ever seen before; it was terrifying and utterly overwhelming.

The emergency support request was to help provide catering for the fire officers, police, body investigation units and other emergency personnel working at the scene. There were hundreds of men and women working around the clock in the aftermath of the disaster, and they all needed something to eat and somewhere to get a drink.

What my colleagues didn’t know was that I was a trained catering manager, with years of experience in the industry. God had a purpose for me being there. Immediately, we began to plan for what was to be a 24-hour operation that would last for more than three weeks. In those first few days, I would drive home late at night to a garage that had been filled with food donations for me to take the following day. As we became more organised, supermarkets and shops donated food. Local school children made bags of sweets with thank you notes for the service personnel.

Some days, the temperature in the capital reached 32 degrees centigrade. Nevertheless, the fire officers were going into the tower, which was still smouldering and scorching hot. We needed cold water! I rang a friend of mine who owned an ice company and asked whether there was any chance of one of his vans was in the area. 20 minutes later, a van arrived with a ton of ice and buckets. From then on, he delivered ice everyday so we could provide cold water.

I find it so hard to describe the impact of an ice-cold bottle of water upon these exhausted, brave, dedicated people. One afternoon, I carried an ice bucket filled with bottles of water to the bottom of the tower. There was a group of fire officers about to go inside. I handed each of them a bottle of water and one fireman began to cry. I asked if I could pray for him before he went into the building. He said: “No, you can pray for all of us.” He gathered his team and I stood in the middle and prayed for them before they went back into the horror of the tower once again.

Over the coming days and weeks, as we provided food, shelter, drinks and a safe place to rest, I learned what sandwiches each person liked and how they took their tea or coffee. Sometimes, I would just sit on the floor with a fire officer or body investigator who had just come out of the tower. They would start to talk, and so I just listened. It was humbling and harrowing to hear what they were facing and feeling. Sometimes, I sat and cried with them, sometimes we would just sit in silence and, occasionally, I would pray with them if they asked.

As I prayed for God’s equipping in that situation, we realised it was just as important for us to be a presence as well as a provision, so another volunteer was added to each shift to make sure one person was always available to listen. It is one of my life’s greatest privileges to have been at Grenfell Tower at that time, to provide a listening ear, support, encouragement and prayer for the amazing service men and women who put their lives on the line going in and out of that tower.

Wanting to become better equipped to deal with such situations, I prayed, and felt God leading me to enrol on a grief and bereavement diploma. I completed the course in 2020, while on furlough and caring for my terminally-ill mum.

One fireman began to cry. I asked if I could pray for him and he said: “No, you can pray for all of us”

In 2021, I co-wrote a book called Grief Conversations, which records personal experiences of grief, trauma and moral injury during the pandemic, as well as providing practical suggestions, based on biblical principles, on coping with grief. I now regularly run bereavement courses, particularly supporting older people through loss and grief. I will never forget the experience of volunteering at Grenfell, or how God used a time of such trauma and loss to totally change the course of my life.

Gail MillarGail Millar is the founder of Befriended, a charity whose vision is to end loneliness and isolation among older people in Mid Sussex. Gail is also an Anna Chaplain, grief counsellor and author of the Grief Conversations (BRF). Previously, Gail worked for the Salvation Army and the pioneer of a Christian retreat centre for people with sight loss.