‘A coma stole years of my life’

After contracting meningitis during childbirth, Marcy Gregg awoke to a world she no longer recognised 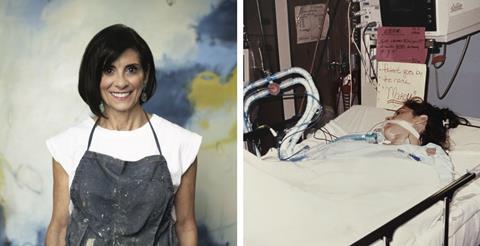 Marcy Gregg was lying in an unfamiliar room, feeling confused and constrained. Panic gripped her as she tried to move her arms and found they were strapped down. As she looked around, she realised she was lying in a hospital bed, but had no idea why. Suddenly, the door opened and two people walked in; a doctor and a man who introduced himself as her husband. The problem was: Marcy didn’t remember getting married and she certainly didn’t recognise the person standing before her.

Marcy’s life had, up until this point, followed a fairly traditional trajectory. She became a Christian at nine years old and lived most of her life in the Texan town in which she had been born. At 17 she met her husband-to-be at college and, once they had graduated, the young couple decided to marry and start a family. From then on, Marcy had her hands full with the demands and joys of nurturing young minds. Life was busy but relatively predictable. Everything changed, however, when her third child came into the world. “When I went into the hospital to have our third baby, I contracted pneumococcal bacterial spinal meningitis,” explains Marcy. “I had the baby and, 36 hours after, I got very sick and went into a coma.”

That coma lasted for a week. Marcy was not responding to medical treatment and doctors called her husband, warning him to expect the worse: it was unlikely she would wake and, if she did, she would have considerable brain damage. “But our minister was coming into town,” explains Marcy, “and God spoke to him and told him to go and pray over me that I was not going to die.” A few hours after he prayed for her, Marcy regained consciousness. “It was truly a miracle,” she says. “Even the doctors – who weren’t believers – said it was a miracle.”

Although God had physically restored Marcy, reuniting a wife and mother with her family, something profound was amiss. Marcy didn’t recognise her husband or children and she was telling everyone she was 17. The then 30-year-old couldn’t remember anything that had taken place later in her life. “[The doctors] really believed that it would all come back as the swelling in my brain went down. They kept saying: ‘Your memories will come back. It will all be OK.’”

But Marcy’s adult memories never returned. “I pretended I remembered in order to get out of the hospital, and I came home to a life I didn’t know,” says Marcy. “It was seven very hard and dark years. I didn’t process it well and I got very angry with God. He had healed me physically, but mentally, my brain was not right and I knew it.” Marcy found readjusting to family life challenging, but she said God’s grace was evident in two main ways. Because she had met her husband at 17, she knew him to be the man she loved, even if he didn’t look like the teenager she remembered. And although she had no recollection of her children, she says her mother’s instinct kicked in.

But her frustrations with unanswered prayer for healing grew as time passed, and she began to seek solace in other places. “I literally drank to forget what I couldn’t remember. I hid it so well that nobody really knew, but it had a bad impact on my spiritual life …I became an alcoholic.”

I KNEW THAT HIS PLAN FOR ME, EVEN WITHOUT MY MEMORIES, WAS BETTER THAN MY PLAN FOR ME

in my backyard,” she says. “We were watching TV as a family and I drew the short straw to go walk [the dog]. As I was walking back up the driveway, I tripped and fell when he lunged after a bunny. When I got up, I had a perfect view into my house. And there was my family, right where I had been sitting – my husband was holding my daughter, and the boys were all around on the sofas…God spoke to me directly and clearly. He said: ‘This is what I saved you for: the future, not the past. And as much as that father loves his children, I love you. And just as that father’s holding his daughter, I’m holding you, but you must trust me.’ I went into the backyard and fell to my knees. I said:

‘Lord, I give up. I’m not going to fight you anymore.’ And I surrendered my life…I knew at that moment that his plan for me, even without my memories, was better than my plan for me.”

Looking back on her life, Marcy can attest that God’s plans have indeed been good. They include a career change after he asked her to give up the successful corporate business she built in the years following her coma.

Marcy is now a successful artist and she uses a process of layering Bible verses and paint, which mirrors what God has done in her life, she says. “I believe [that] in our lives every layer – the good and the bad – matters. One layer of paint on a canvas does one thing, but when I put another layer on top of that, it adds brilliance and another dimension to the painting. I use seven layers of paint, so it gives the painting a beauty and depth that’s totally different than just that one layer of paint – as it is with our lives.

“So when people say: ‘Do you wish you hadn’t lost your memory… or hadn’t experienced alcoholism?’ I think: Yeah, but all of those things, even the bad, are layers that God is using to make me who I am. And they’re drawing me to him, so every layer matters.”