Wrestling with biblical teaching on gender inspired my award-winning photograph

‘Wonder Boy’ has just been nominated for the prestigious Portrait of Britain award. Marksteen Adamson explains how his Christian faith informed the photo of his son 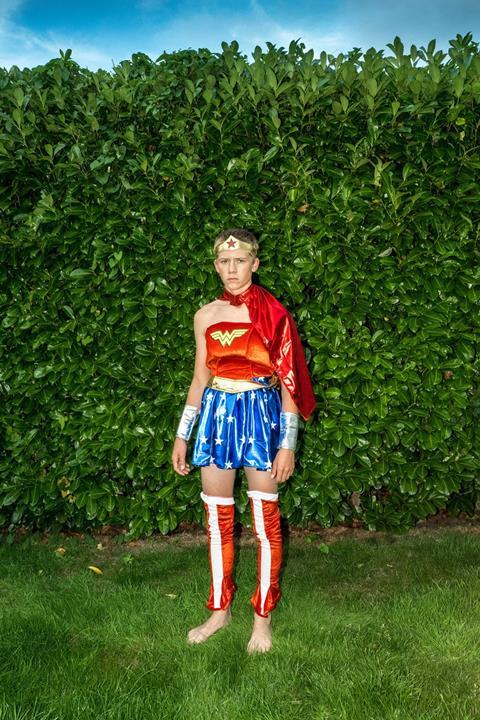 I was the son of a preacher man. I grew up in church and was fed the Bible like breakfast cereal. My dad was the archetypal patriarchal demigod. It was his way or the highway, and the expected norm was that women were ‘less than’. This played out like a classic Old Testament story of the rise and fall of a man who failed to embrace and evolve and develop emotional intelligence – the key to unravelling unhealthy strongholds and habits passed down from the sins of our forefathers.

His old-school biblical teaching always felt male advantaged to me. God was a he, Jesus was a he, all the disciples were men, and all the Old Testament prophets and angels were men too. The preachers and teachers were men. Even the three wise men were…men!

At an early age I was already getting suspicious about the curation of the Bible stories, and when I discovered it was patched together by men, it all started to make sense. I started to get interested in what lay between the lines and looked at what was not being said and why. I was super interested in omissions like the apocrypha and all the women that had been close to Jesus as friends, confidants and undoubtably ‘un-recorded’ disciples too.

Looking in depth at the character of Jesus and what he said and how he behaved and interacted with both genders, it became clearer to me that stories of events and the relationships Jesus had, could have been edited and sculpted in favour of insecure men in power at the time.

From then and to this day, male church leaders, like my father, have often felt the need to hold fort, rise above, show strength and give direction at all costs. The lack of self-awareness, inability to be vulnerable and the lack of female insight and wisdom, ultimately made them fallible.

In his book The Descent of Man Greyson Perry writes, “For decades now, female writers and theorists have been dismantling their biological gender from the perceived feminine roles that can restrict or harm their lives. It is only recently that we have started to do this with men too, to see a man as distinct from the concept and construct of masculinity”.

As I grew up and started my own family, I made a conscious decision to make sure my boys had the freedom to explore, ask any questions, be who they wanted to be, and all without judgment. After all, that’s how Jesus is with me.

I’m pleased to report that my boys are mentally sound and balanced.

So, this is a portrait I took of George, my youngest son.

He says, “I think the way men are expected to be in society is detrimental. The expectation of ‘manliness’ – wanting all the ‘manly’ parts of the typical masculine attitude without any of the vulnerabilities. Limited emotional expression but still needing mature understanding of mental state. It’s no wonder men struggle to develop a positive feminine side.”

These young men like George are defending women and embracing their feminine side. They are interrogating this toxic subject armed with newfound knowledge, research and empathic understanding; that should give us all hope for a future where, one day, we all understand the true meaning of and believe in true gender equality.

Marksteen AdamsonMarksteen has gained an international reputation for being an inspiring creative strategist and problem solver, advising global companies, governments, countries and charities on brand strategy and brand behaviour. Marksteen was Global Creative Director of Interbrand and joint Director of its worldwide steering committee, building and overseeing the creative teams in London, Amsterdam and New York before making the move to set up ASHA & Co in 2002. For more information see ashaandco.uk