What is a pagan goddess doing in a place of Christian worship?

Everyone agrees that looking after the planet is important, but the “Gaia” exhibition touring UK churches crosses a line into pagan idolatry, argues Dave Brennan 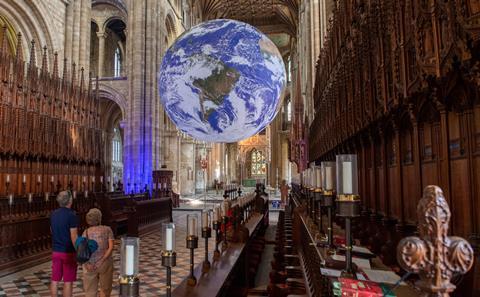 I’ve never met a Christian who objects to the idea that part of our responsibility under God is to look after the earth he created as God’s undermanagers (Genesis 1:28).

But much of the spirit and messaging of the “Climate Emergency” narrative that we are now hearing from many quarters – including the Church – is very different from the biblical idea of stewardship, and we are in danger of being swept into a deeply unchristian way of thinking and living if we don’t perceive what is pagan and decide to stand against it.

Christians need to understand that many of the common elements of this narrative are in fact incompatible with biblical Christianity and are harmful.

In the case of the “Gaia” exhibition currently being hosted in St Peter Mancroft church, what we are talking about is nothing short of pagan earth-worship.

“Gaia”, named after the Greek mother-of-all goddess of the earth, features a large globe hanging in the air and “gives us the opportunity to experience the fragility of our planet in a new light”.

Allow me to spell out why this is anything but innocuous:

It’s important not to quarrel about words (2 Timothy 2:14). The names of our days of the week have pagan roots (Thor, Saturn…). But what we are talking about here is far more than mere etymology.

The artist Luke Jerram consciously and deliberately chose this name because of the identity of the Greek goddess, and she was referenced uncritically in a speech made in St Peter Mancroft by the Lord Mayor at the exhibition’s opening: the installation “named after the Mother of All in Greek Mythology hung in the church ‘like a mother patiently waiting’”.

The idol is also mentioned in some of the text accompanying the exhibition inside the church building.

The constellation of the pagan name, the personification of the earth, the sense that our survival depends on it (see below), the willingness to take drastic sacrificial action to keep it happy - together with the abandonment, even denial, of key biblical perspectives (see below) - all begins to look a lot like pagan earth-worship.

Indeed, if this isn’t enough for it to qualify as idolatry, what would be?

At the very least we have to see that this is misguided, confusing, unhelpful.

Can we imagine Paul bringing a statue of Artemis (a virgin goddess) into a first-century Christian meeting to teach about chastity?

2. The earth is being viewed from a God-less perspective

The exhibition portrays our “planet home” as “fragile” and alone, “hanging in a void”, and insists that it is up to us to change its destiny through drastic action to ensure its survival and ours.

Notable for their absence are the following biblical truths:

i) Far from being alone in a void, “the earth is the Lord’s” (Psalm 24:1) and he sustains it “by his powerful word” (Hebrews 1:3). “He’s got the whole world in his hands,” as the old African-American spiritual goes. While of course this doesn’t mean that it doesn’t matter how we steward the earth, it does mean that its destiny is not in our hands. There is a big difference between the biblical concept of obedience to a loving God, trusting him with the future, and the pagan concept of trying to manipulate nature through human activity to control future outcomes. Gaia falls very much into the latter category.

ii) We know that earth will be destroyed when God decides (2 Peter 3:10), so the idea of making its indefinite survival at all costs a top priority for the Church is misguided. (Again, not an excuse for wanton abuse of the earth.) Our top priority surely needs to be to prepare people for what happens after the inevitable destruction of the earth or of their earthly bodies – whichever comes first.

iii) While our “planet home” has its importance, there is nothing here about the eternal home (John 14:3) that Jesus has gone ahead to prepare for those who put their trust in him, nor about the “everlasting punishment” (Matthew 25:46) that awaits those who reject Christ, after this brief “planet home” life is over. Granted that this earth is in a sense “fragile”: why not use this as an opportunity to point people to a hope that is truly secure?

iv) Gaia offers no biblical interpretation of why “the whole creation has been groaning…right up to the present time” (Romans 8:22). Biblically, it is clear that it is because human beings, from Genesis 3, have sinned against God, worshipping created things. But the Gaia exhibition would have it that we have merely mistreated Mother Earth directly, nothing more. There is no mention of sinning against a holy God.

v) Consequently, there is no call for biblical repentance “from idols to serve the living and true God, and to wait for his Son from heaven, whom he raised from the dead – Jesus, who rescues us from the coming wrath” (1 Thessalonians 1:9-10). Ironically, in attempting to address one of the symptoms (earth pains) in isolation, Gaia actually aggravates the root cause (self-reliance and God-forsaking idol-worship), and this may well result in even worse symptoms!

3. We are simply following the ways of the nations

To declare the climate an “emergency” and “the defining issue of our time and the greatest threat to our well-being, globally and locally” is to follow the zeitgeist, not the Bible or the facts.

How can it be maintained that climate change (predicted by the World Health Organisation to cause an additional 250,000 deaths per year between 2030 and 2050) poses a greater threat than the global baby genocide (already taking 73 million lives a year, according to the same World Health Organisation)? And how can it be argued biblically that 2°C grieves the heart of God more than mass scale child sacrifice?

Prioritising climate change above issues such as abortion – or deeper issues such as idolatry – betrays the extent to which the Church has followed the ways (and invisible gods) of our culture, rather than taking the lead; has become a thermometer rather than a thermostat.

We cannot “save the planet”. We cannot even save ourselves.

But by God’s grace we can be saved, through Jesus – if we repent of worthless idols and put our trust in him.

Dave BrennanDave Brennan is one of the directors of Centre for Bio-Ethical Reform UK. He leads the Brephos project