The publishers say this book has a 'raw hip hop style'. But it read like a sermon to me 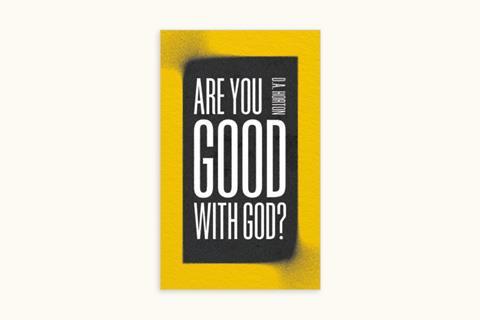 At less than 70 pages long, Are You Good With God? is more of a long tract than a book. Imagine those leaflets that evangelism teams hand out to shoppers on the high street, expand the points into a few paragraphs, throw in the odd anecdote and pop culture reference, and that’s pretty much it.

The book has been advertised as being full of “giant truths written in the raw and rhythmic style of hip hop”. The author is a rapper, but there’s little here that could be recognised as raw and rhythmic. Rather, it reads as if he’s transcribed one of his sermons.

Horton starts off on a topical note, telling us how during the Covid-19 lockdowns, Netflix subscriptions rose whilst Bible reading dropped. He proceeds to liken the Bible to a Netflix series (other streaming services are available) in order to explain how it works. Each chapter in the Bible is one episode, and there are four seasons in total: Season 1 (Genesis chapters 1-2), Season 2 (Genesis 3:1-7), Season 3 (Genesis 3:8 - Revelation 20:15) and Season 4 (Revelation chapters 21-22). For me, Horton’s 'Netflix series’ analogy doesn’t hold up. How many Netflix shows do you know of in which Seasons 1 and 4 are just two episodes long, Season 2 is so short you wouldn’t even call it a trailer (it’s just seven verses!) and Season 3 is a massive marathon that starts in Genesis and goes all the way through to Revelation? The reason so many people give up on Bible reading is because they’ve tried to binge-watch Season 3 and come unstuck!

The title is taken from a story Horton tells right at the end, of a distraught man he met on a hot day in Kansas City. It’s very moving and really should have been put at the beginning to draw us in, rather than stuck at the end like an altar call you’re supposed to respond to.