The Holy Spirit is moving powerfully at the Lambeth Conference 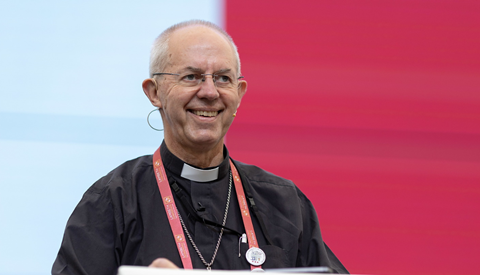 Ten days ago, I asked friends, family and followers on social media to pray for a visitation of the Holy Spirit on the Lambeth Conference.

It’s a prayer I’ve been praying in general for gatherings of bishops over the past year or so. Over the past 12 months I have been astonished by a trickle of priceless conversations, always off-stage, one-to-one, hidden. A word spoken, by chance, which seemed to fire faith. Coincidental conversations which left me in awe of how the Spirit orchestrated that “accidental” meeting.

But what happened yesterday at the Lambeth Conference was something else altogether.

Not just a trickle, but a soaking.

Archbishop Justin’s words to us at the start of the session on Human Dignity held it so well. As he spoke, it felt like there was a heaviness of the presence of the Spirit of God in the room. I can still feel it as I type this now.

After he spoke, we had such a constructive conversation round my table. These were brothers and sisters who represented the full spectrum of views across the Anglican Communion. Our notes were typed by a brother bishop from The Episcopal Church who is himself in a same-sex marriage. He read his notes back to us – were we content that our voice had been heard? Yes and yes and yes. It was like he’d been given the spiritual gift of interpretation to write down with crystal clarity what a brother in South Sudan and I both thought about upholding a traditional view on marriage from scripture.

It was as if Archbishop Justin’s words opened an umbrella of faith over us all.

Yes of course, we can look down, look inwards and argue over intellectual interpretation of precise wording with on trend cynicism. But that would be to miss out on looking upwards and outwards to the wider vista. Archbishop Justin invited us to be present in the room as bishops from across the globe. I was able to put aside the febrile anxiety that has surrounded the conference to attend to what was happening to in that moment, in that room.

My heart was filled with hope, present and future, for the Anglican Communion.

But much more than this, I have awoken with new levels of hope. In my mind’s eye I see beacons of faith, lit by unlikely brothers and sisters, creating chains of light, south, north, east, west across the globe; carrying fresh fire of the gospel, fanned into flame by the prayers of many.

I spoke with many brothers and sisters afterwards, late into the evening, local and international. A rapid torrent of faith-filled conversations. We have been soaked with fresh hope.

I want to thank everyone for holding us in prayer. I thank God for opening an umbrella of faith. “Come Holy Spirit, fill the hearts of your people, and kindle in us the fire of your love”.

Jill DuffRt Rev Jill Duff is the Bishop of Lancaster