The renowned English pastor, author and preacher Stuart Briscoe has died at his home in Wisconsin, USA. Briscoe, who led the Telling the Truth ministry with his wife Jill, was 91. His sermons are broadcast all around the world, including on Premier Christian Radio in the UK. Keith Danby pays tribute to him 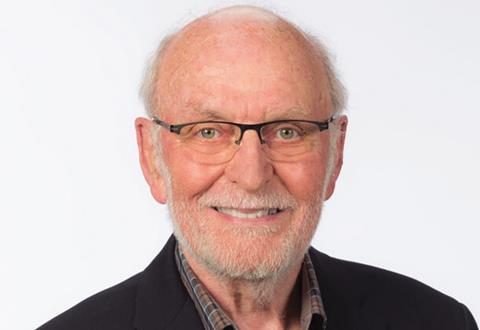 I first met Stuart in 1972 when I was in my late teens and a student at Capernwray Bible School in Lancashire.

The year before, Stuart had moved to the USA to become senior pastor at Elmbrook Church in Brookfield, Wisconsin. The church had a small congregation (by American standards) of 300. But he had a long association with Capernwray, having previously served as associate general director.

My first encounter with Stuart, who was lecturing at the Bible School for the week, was a massive wake up call for me. I had never heard Bible teaching like it before. Insightful, witty, wise and very practical. This brilliant preaching helps explain how Elmbrook was able to grow from a few hundred congregants to over 7,000.

Stuart and I never actually had any personal contact that week. I was too intimidated by this giant of a man.

After the Bible School course I was invited to stay on staff and was appointed treasurer. This meant I had frequent opportunities to meet Stuart and Jill when they attended Capernwray events. Little did I realise then, that this was the start of a 40 year friendship. Stuart became a wise ‘go to person’ and God used him at very strategic junctures in my own life.

The first of those came in 1974, shortly after I married Carol, an Irish Nurse. We moved to Northern Ireland so I could study for a professional qualification in financial administration. That autumn, Stuart was taking a week-long series of meetings at the iconic Ulster Hall in Belfast, a few minutes from our small rented house. Every night was filled to capacity with people of all ages to hear his incredible ministry. We connected after of one of the first evenings and he invited me to come and spend time with him at the home of his host, William Fitch. The meeting together was like taking a wonderfully cold shower on hot muggy day. I came away invigorated. As I was leaving, William Fitch arrived home and after a few words of introduction I left. Little did I realise that was no chance meeting, but part of God’s great master plan. A few years later William contacted Stuart for my details and I went to work for William in my first senior management job.

An even more life changing event took place 13 years later. I had been approached by George Verwer and Peter Maiden, the two most senior heads of Operation Mobilisation (OM). They wanted me to become director of Send The Light (STL), which was OM’s literature work. I was still living in Northern Ireland, now with a young family. STL was based in London and the job offered no salary - I had to raise my own financial support. I was convinced the job was not for me, I did not want to live in London, I did not want international travel and I was very worried about the no salary aspect and how I would support my wife and two young daughters. It was a definite ‘no’ but they were convinced I was God’s man, and would not take no for an answer!

Stuart happened to be in the UK. We connected and I unburdened myself on him about this dilemma. Stuart said, "Keith don’t worry about the money thing, God is big enough to take care of that. Also don’t worry about your daughters. Most dads have boring jobs. But your daughters will be able to say, 'my Dad’s in India this week!' They will be able to visit places other kids have only ever heard about. They will experience rides on camels and meet amazing people."

I eventually obeyed God’s call and joined STL in September 1987 and served as chief executive for 25 years. I met Stuart and Jill regularly in the US, stayed at their home and they helped with many of my projects.

The last time I met Stuart was in Hyderabad, India in 2011. I was on the international board of Good Shepherd Community Churches and OM Books, and Stuart was speaking at a conference for the churches. We had lunch together and reflected on 30 years of friendship and our journey together.

What a man! A friend, mentor and inspiration. I look forward to our next meeting in heaven.

Keith DanbyKeith Danby is the former CEO of Biblica and Send The Light. He is now the Chairman of Safe Families for Children and Premier's Business Development Director