Greg Haslam (1953-2021): A compelling preacher burdened with a prophetic message

Greg Haslam was the senior minister of Westminster Chapel from 2002 to 2016. He was also a well known author who often spoke at major Christian conferences. His son Andrew, who is the leader of Grace Church London, says his life was marked by integrity and sincerity. 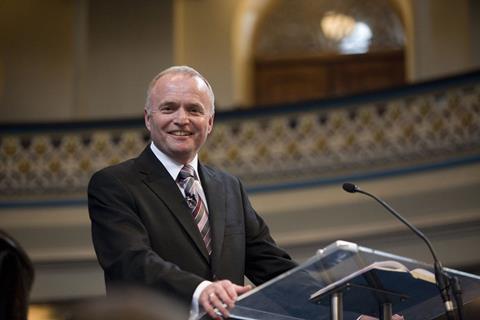 On Friday 20 August, my dad Greg Haslam went to be with Jesus.

He died in his home with his family and nurses caring for him. He was 68 years of age. He is survived by his wife, Ruth, his three sons, his three daughters-in-law, and ten grandchildren.

Five years ago, at age 63, dad had received a diagnosis of early onset Alzheimer’s. It was a heavy blow to us as his family, and dad was tearful but resilient and brave. At no point did he express anything like self-pity or anger at his situation though he was obviously sad at times. He retired from his ministry the day after his diagnosis, and my mum became his full-time carer; a role she has performed with such exceptional devotion every single day since.

It is impossible to sum up the experiences of the past five years as we have watched his mind and his capacities disappear so rapidly and so relentlessly. We have grieved often and deeply at the gradual loss that has taken place before our eyes, unable to pause his decline or turn back the clock. You might think that we would have been ready for his passing after all these years, but his death has hit us all with fresh grief and we are truly heartbroken.

Dad was loved by many, many people. We have received a flood of messages from lives he touched, whether as a friend or as a preacher and pastor. These messages are being shared among the family, and that has been healing. The tragedy of dementia is the sense of loss, that something so precious and irreplaceable is slipping away. Reading messages from near and far reminds us of the man he was, of all he accomplished, and of how God used him to transform lives.

Dad was a rare and exceptionally gifted person, so full of conviction, tenacity, compassion, insight, wit, and courage. Growing up in Bootle, Liverpool, in a broken home, there was no indication he would have become a preacher. His family were not churchgoers, nor were they Christian. But he began reading voraciously in his teen years, not long after he became a Christian at age 14 after hearing Billy Graham preach. As he discovered influences like C. H. Spurgeon and Dr. Martyn Lloyd-Jones, it is no exaggeration to say that books changed the direction of his life.

He soon felt called by God to be a preacher – a fact he did not divulge to my mum until after they were married! This calling eventually brought them to London where he trained for ministry, then to Winchester where he led a church for 21 years, and then back to London where he pastored for a further 14 years.

There was an urgency in his desire to preach Christ. This urgency of calling did not diminish but rather grew with each passing year of his ministry. As we listened to him expound the scriptures, hearts began to burn, and that ignition warmed so many with love for Christ. His natural gifts, including his sharp intellect, eloquence, and clarity of expression, were inflamed by passion and captivation with the gospel, and with the grace of God’s Holy Spirit. It was this rare combination of careful and logical preaching, enlivened by a living reliance on the Holy Spirit, that made him so compelling and rare. He was a messenger, and he was burdened with a prophetic message and a duty he simply had to discharge. He felt that knowing Jesus was the greatest privilege imaginable, and he wanted others to find the love that had so captivated him.

What many knew of dad in public was true of him in private. His life was marked by integrity and sincerity. He was the same man, through and through. As I have reflected over the years, I think this is the main reason why my brothers and I were able to listen to him – whether at church among hundreds or over dinner with the family – and take seriously all that he believed and spoke about. Where many pastors’ kids feel the burden of performance that turns into resentment, I can say that I felt nothing but the privilege of getting to be with dad all the time and not just on Sundays. I know I speak for my brothers, James and Joshua, in expressing this.

Saying goodbye to dad has been unbelievably difficult. There is a giant, gaping hole in our hearts, and it aches to think of all that we have lost. His laughter, his kindness, his wisdom; all that he was has left an indelible mark upon us, but we just miss him so, so much. And yet, our grief is infused with hope. We do not grieve as others do who have no hope (1 Thessalonians 4.13). There is relief in knowing that his suffering has ended, and that he’s with Jesus, and that we will see him again one day.

This article was first published on andrewhaslam.net and is re-used with permission

Andrew HaslamAndrew Haslam is the leader of Grace Church London. Prior to planting the church he worked at Westminster Chapel for seven years, and before that he studied Theology at King’s College London, and then at Oak Hill College.