It’s one year since church leaders promised to re-examine their attitudes towards racism. So, what’s changed?

12 months on from the tragic death of George Floyd, have church leaders kept their promises? 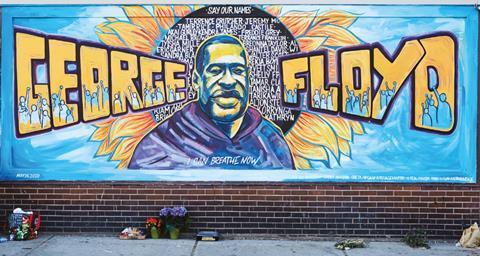 Twelve months ago, a video of an American police officer kneeling on the neck of an unarmed black man sparked rage, not just across the USA, but the world. George Floyd uttered the words “I can’t breathe” 27 times before he lost consciousness.

Within days of the video going viral, white church leaders in the UK were vowing to make their leadership teams more diverse, and to listen and learn from the ethnic minorities in their congregations.

“A lot of people said things are never going to be the same again,” remembers Christian author and speaker Krish Kandiah, “and my fear is that we made commitments that things would change in the aftermath of George Floyd’s death that we haven’t really fulfilled.”

Referencing promises from leaders to be more inclusive, he says: “You could quite easily invite an African pastor who lives down the road, or actually lives in Africa, to Zoom into your Sunday morning service. But how many of us have actually done that?”

Kandiah is organising The Road to Racial Justice, an online event to be held on the anniversary of Floyd’s death. Panellists including NT Wright and Rev Celia Apeagyei-Collins will discuss how the Church “still needs to put its own house in order, in terms of diversity” and be a peacemaker in the wider cultural conversation around race.

A LACK OF REPRESENTATION

Pursuing change in any area is difficult, especially when problems have been engrained over long periods of time. Speaking to Premier Christianity, Professor Robert Beckford, a leading theologian and BAFTA award-winning filmmaker commented: “Sadly, racism has been an integral part of the Christian tradition for at least 1,000 years. We have a tradition which, on the one hand, claims to be about inclusion, justice and equality, but we haven’t practised that – look at what we did in the Caribbean for 500 years, or the Catholic Church in Latin America.

The lack of diversity in Christian and academic publishing is a subject close to Kandiah’s heart too. Growing up, he says every children’s Bible storybook that he read contained illustrated images of white people. “I always assumed everyone in the Bible was white,” he says. “This really struck home to me when I was reading to my own kids a book called Ten Boys Who Changed the World and I realised every single boy was white. Hudson Taylor and William Wilberforce were great men. But it is not only white men who have changed the world.” Kandiah is now working on his own children’s book, co-authored with his wife, which aims to help redress the imbalance.

The Archbishop of Canterbury has admitted on more than one occasion that the Church of England is “deeply institutionally racist”, but Professor Beckford believes more needs to be done. Taking aim at the Church hierarchy for their “lack of moral courage”, he says: “Wouldn’t it be great if we heard the Archbishop of Canterbury come out strongly and consistently against racism? What if churches like Hillsong started preaching and teaching and writing books on racism? Wouldn’t it be great if NT Wright wrote a book on anti-racism, rather than telling us the usual stuff about how Jesus wants to save you?”

Professor Beckford was speaking shortly before the BBC’s Panorama programme revealed staff complaining about racism in the Church of England had been paid off to “buy their silence”. Former Church race-relations advisor, Dr Elizabeth Henry, said some alleged victims of racism were asked to sign non-disclosure agreements. In response, the Church said: “any [racist] behaviour of the sort described by Dr Henry is unacceptable” and confidentiality agreements were used only “in exceptional circumstances”.

Disagreements over the extent to which racism is a problem today (not to mention how we should tackle it) persist in both the Church and the wider world. Last month, the Commission on Race and Ethnic Disparities, which was set up by Boris Johnson in the aftermath of the George Floyd case, published a controversial report, which rejected terms such as “white privilege” and concluded: “we no longer see a Britain where the system is deliberately rigged against ethnic minorities”.

The report also said there was an “increasingly strident form of anti-racism thinking that seeks to explain all minority disadvantage through the prism of white discrimination”.

The National Church Leaders Forum, which represents 200 black church leaders in the UK, said the findings were at odds with their own “lived experiences”. In a statement they said: “the success of some has been achieved in spite of, not in the absence of, institutional or systemic racism.”

Following the report, Churches Together in Britain and Ireland hosted a webinar entitled: A Moment of Dishonour? One of the speakers, Clare Williams, whose specialism is apologetics, commented: “To be honest, we’ve been shown up by the Black Lives Matter organisation – they’ve done a great job in exposing and shining a light on this issue. We need to have spaces in church where we discuss this. We need to show how our theology is meant to transform and challenge society. All of the minor prophets were talking about God’s justice.”

Kandiah has noticed issues of race becoming increasingly politicised, and he believes this has made the conversation “more complicated”. Depending on who you speak to, Black Lives Matter is either the new civil rights movement, and therefore above criticism, or is promoting an extremist Marxist ideology and stoking division. Kandiah is concerned about this polarisation between left and right, and believes Christians can show the world a better way: “Discernment is really important for us in these polarised times. Churches too quickly jump to one side of the debate and demonise those on the other side. We need to transcend that.”

To what extent Christians can succeed in bringing reconciliation remains to be seen, but as Rev Canon Rosemarie Mallet, the Archdeacon of Croydon, commented during the Churches Together webinar, racism is not a subject the Church can afford to ignore: “I’m not apologising for focusing on social justice or racial justice because I think it’s biblical. It is what Jesus came to show us and to teach us and I think we as Christians need to keep going on the front foot.”

The Road to Racial Justice will take place on 25 May at 8pm. To register your free place, visit roadtoracialjustuce.eventbrite.co.uk