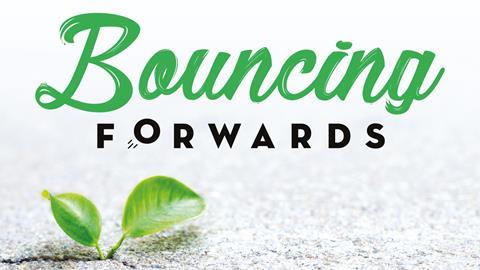 How to thrive in adversity

Having lived with a degenerative condition for years, Patrick Regan has grappled with physical and emotional pain. Here he shares lessons in resilience he has learned personally, as well as gems shared by Anne Frank’s stepsister, Eva Schloss, former hostage Terry Waite and retired police commander John Sutherland

Have you ever been through a painful situation and had someone say to you: “Don’t worry; you’ll bounce back”? I know I have. A degenerative knee condition meant years of grappling with physical pain after my legs were broken and then put back together by a metal frame. There was also mental and emotional pain, as my life changed beyond recognition and I couldn’t work, pick up my children or walk with ease. I wrestled with the spiritual pain of wondering where God was in the midst of it all too. I’m far from alone in my struggles. This last year most of us have dealt with more fear, more loss, more change and more stress than we could ever have imagined.

I had begun thinking about resilience in 2019 and had already decided to write a book about it before the pandemic struck, when the topic suddenly became even more pertinent. Resilience is about thriving in adversity. It doesn’t depend on your circumstances changing. Instead you find purpose and meaning in the midst of them.

Who better to talk to about resilience than those who have first-hand experiences of living through some of the worst horrors the world knows? I recently had the privilege of speaking to Holocaust survivor and stepsister of Anne Frank, Eva Schloss, a man held hostage in Beirut for five years, Terry Waite, and the former Metropolitan Police commander John Sutherland, who had a nervous breakdown and is now medically retired. I asked them how they made it through the suffering they experienced, and what we could learn from them to apply to our lives now. Here’s what I discovered. 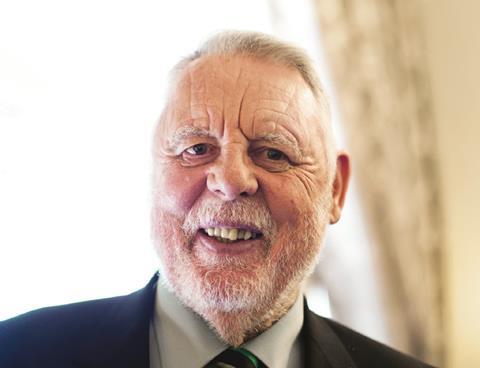 Terry Waite was working to free hostages when he himself was taken prisoner by Hezbollah in 1987. He spent 1,460 days in solitary confinement and then wasn’t released for almost another year. The conditions he describes are horrific. He was held in a cell, chained to a wall and slept on the floor, with no natural light, no companionship and nothing to read, watch or listen to in order to dull the agonising passage of time. It’s impossible to imagine the anguish of such conditions. Especially when he didn’t know if or when he might be released, or whether he would be held there until his execution.

How did he cope? Waite says he decided he had to utilise the time as best he could. In restricted and limited circumstances, he held on to one thing: “This is my life now. Not tomorrow or yesterday. So, in this moment, don’t be defeated.”

I think I might have been tempted to just dream of the day I would be released, or wallow in memories of the past. Waite learned to live for the now and it saved him. He couldn’t change his circumstances – he tried taking control in the first week by refusing to eat anything, but soon realised that wasn’t going to help.

Pain causes us harm, but it can also help us grow

He recognised that life isn’t fair, and everyone suffers. Knowing he was fortunate to be alive, he decided he needed to utilise whatever time he had, writing poetry and his first book in his head.

IT’S BRAVE TO ASK FOR HELP

John Sutherland has taught me a lot about courage. Not necessarily from the days when he would be the first on the scene at a fatal crash or negotiating with a gunman during an armed siege. Though those things are impressive, the most courage I’ve ever known him display was the day he admitted he couldn’t do it any more and he asked for help. Having served in the police for many years, he was exposed to high levels of trauma on a regular basis. When he started out there was little awareness of the impact this would have on mental health, so officers just got on with it. Sutherland says he used to think resilience was about ‘manning up’ and ‘pulling yourself together’ until he realised one of the bravest things you can ever do is put your hand up and say: “I’m struggling.” 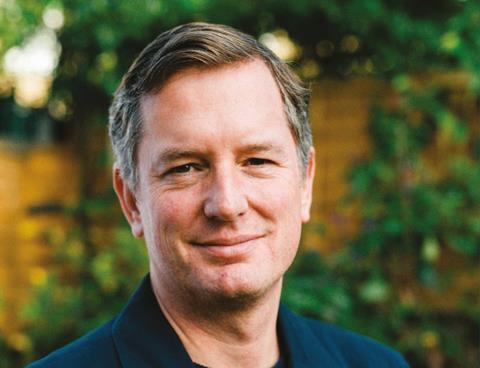 Everything came crashing down for Sutherland when he found himself unable to work. Sinking into a deep depression, he could barely move; this once active and in-control man could do little more than lie on the sofa. He needed time off work, he needed to see his doctor and get medication, and he needed to see a counsellor and talk through the build-up of trauma that had hit him all at once.

Waite also extols the virtues of telling your story to a trained listener. “If you have a severe trauma and you push it down and try to forget about it, the chances are it will resurrect itself through dreams, nightmares and flashbacks some time later. But, if you take hold of it pretty soon after the experience, you can manage it rather than being managed by it.”

For Eva Schloss, it wasn’t an option to speak to someone after the war; counselling just wasn’t available in Europe in 1945. In fact, she didn’t speak to anyone about her experiences for more than 40 years, but she knows that her silence contributed to her having nightmares and nervous illnesses over the years. Her family had been in hiding in the Netherlands when they were betrayed, captured and taken to Auschwitz. She lost her father and brother, who died during a death march, and she and her mother narrowly escaped the gas chambers. She barely survived due to the minuscule rations of food, the hard labour and the sleep deprivation common to all the prisoners. After living through these hellish conditions, she implores people to speak to someone and get help. “It’s important to speak up,” she says. “It doesn’t have to be a counsellor, but you have to share what you find difficult to cope with.” It was when her stepfather, Otto Frank, died, that she began to open up about the war, not wanting the world to forget the stories of those who had died in the concentration camps. 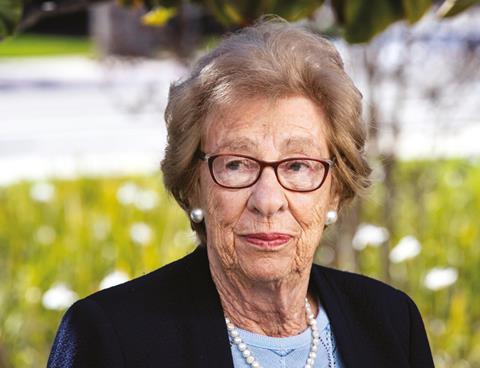 FAITH IS NOT ABOUT FEELINGS

Many people say it’s when they’re at their lowest that they’ve known God closest. But that’s not true for everyone. Waite says that on one day of his captivity he was told he had five hours left to live. His captors allowed him to write one letter to his loved ones, and say the Lord’s Prayer, then they held a gun to his head. “I felt alone and isolated,” he says. “I never felt what some people claim to feel, and that is the close presence of God. That doesn’t mean to say I lost faith, because faith is not dependent on feeling. Feeling can be occasioned by illness and all sorts of things but it’s not a reliable guide as to whether or not you have faith. I realised I could say: “You have the power to break my body (they tried) and my mind (they tried), but my soul is not yours to possess.”

We’re not elastic bands; grief and disappointment change us

Sutherland says that at his lowest, he realised he had nothing to give God and that was OK. “It dawned on me that all my life I had been trying to earn God’s love by being a ‘good Christian’, whereas actually I didn’t need to do anything for him to love me. I was enough.”

DEAL WITH YOUR ANGER

Anger is a normal human reaction to pain – whether it’s directed at a person or situation that has hurt us, or a rage at how unfair the world is. As Christians we sometimes feel we shouldn’t be angry, but of course that doesn’t change the fact that we are. Pain and anger left unresolved can lead to depression and many other health challenges.

Schloss says that after the war her stepfather realised how depressed and full of hatred she was. “This was my downfall. Otto said: ‘When you hate people, the people you hate don’t know it, but you feel miserable.’ That was true.” She found that as she let go of her anger, she slowly began to get her spirit back.

Waite says that one of the first things he did in those early days of captivity was write a poem in his head about anger. He said he realised: “If I allow my – understandable – anger to get the better of me, it will destroy me. Anger is a natural human force; we all have it. You can’t obliterate it totally, but you can take that force and utilise it constructively.” 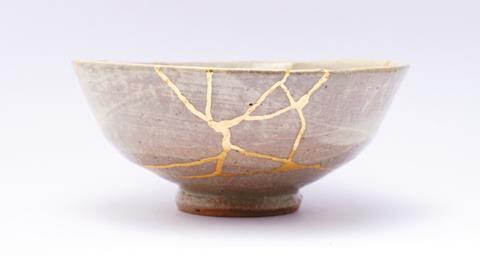 Kintsugi Hope is named after the Japanese art form kintsugi, in which a broken pot is mended using liquid gold. It is then viewed as more precious than it was originally

PAIN CAN HELP YOU GROW

Pain causes us harm, of course, but it can also help us grow. Waite says: “In every situation there are seeds of new life. I found I had the ability to write, and it gave me strength. When I came out of captivity, I gave my life to working with people who are homeless, and with hostages and their families. Prior to captivity I wouldn’t have had the courage. The past years since release have been very rewarding – I never underestimate the pain and difficulty of suffering, but within it are the seeds of new opportunity in the majority of cases.”

Sutherland concurs. “You could offer me all the treasures of this world and I wouldn’t volunteer to repeat the experience of falling – but neither would I choose to give up all that has happened as a consequence. There have been endless silver linings.”

We need to let go of the idea of ‘bouncing back’ after pain and suffering. We’re not elastic bands; grief and disappointment change us. I love the image author Chris Johnstone uses where he compares a tennis ball and a tomato. You can squeeze a tennis ball or throw it against the ground, and it remains the same. Not so with a tomato, you’d end up with a mess!

Johnstone points out that this is only one view of resilience. Think about what happens if you bury a tomato and a tennis ball. After a number of years, the ball will probably have decomposed and be useless. On the other hand, given the right circumstances, the seeds in the tomato may have taken root and given birth to new life. You could find new vines, ripe with fresh, juicy tomatoes. When struggles lead to new growth – this is what we mean by bouncing forwards. 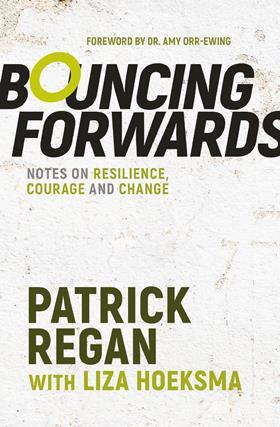 When I asked Waite what advice he has for us as lockdown eases, he replied: “When you’ve been through a traumatic experience, take it as though you’re coming up from the seabed. If a diver comes up too quickly, they get nitrogen in the blood and become very ill. If you come up gently, you’ll find you’ll be fine. Take it gently, step by step.

This reminds me of how Sutherland and I often sign off messages to one another. “Go gently” we say, reminding each other of our habit of beating ourselves up, expecting too much of ourselves, feeling shame for our failures and frustration with our mistakes. It also reminds us that we’re loved, that we don’t need to strive. You, too, don’t need to have this all figured out just yet. No one does. Just keep going, one step at a time. Go gently.