The Sceptic: The Man who wants to turn you into an atheist

Some book titles leave you with little doubt about their purpose. A Manual for Creating Atheists by Peter Boghossian is one such title. The premise is simple. Those who read the book will be shown how to talk religious people out of their faith, using what the author describes as ‘street epistemology’ (more on this later).

Think of it as the atheist answer to the Alpha course. The author even hopes his sceptical brethren will be emboldened to go to places where religious people congregate – churches, mosques and synagogues – and attempt to (de)convert them on their own territory.

Boghossian admits that the book’s provocative title is a nifty bit of marketing that was suggested by his publishers. He denies that the book  is specifically aimed at turning people into atheists. Instead, he claims that any loss of religious faith that may result is simply ‘a consequence of helping people to think more clearly, and be more rational and reasonable’.

‘The goal of the book is to disabuse people of bad ways of thinking and superstitious belief,’ he insists. ‘It’s to help people live more thoughtful, more examined lives and to be less capricious and more careful   about how they use certain words; specifically the word “faith”.’

The definition of the word ‘faith’ is a big issue for Boghossian. In his view, it is generally used by believers as an excuse for not having enough evidence for their beliefs (in God, the power of prayer or anything supernatural). He describes faith as ‘a false epistemology’, a philosophical term for how we come to know things. He goes even further in his book, claiming that faith is ‘pretending to know what you don’t’.

When challenged about whether this is really what Christians mean by the word, he backtracks, claiming that the provocative ‘pretending’ definition is a secondary one. Nevertheless, he maintains that most Christians really do use ‘faith’ to make up the gap between evidence and belief. ‘I’ve taught literally tens of thousands of students and talked to people in all walks of life and this is exactly how they use the word faith; as “unevidenced” belief,’ he claims.

Many have taken issue with Boghossian’s definition, arguing that neither the Bible (where the Greek word for faith, pistis, could equally be translated as ‘trust’) nor common usages of the word back up his claims. They say faith is about trusting in something for which we have evidence. Nevertheless, Boghossian maintains that revealing to believers that the concept of faith is fundamentally flawed is the quickest way to convert them to a more reasonable (and therefore atheistic) point of view.

Boghossian’s modus operandi has been welcomed by the atheist community, with leaders including Richard Dawkins and Sam Harris praising its direct approach.

Boghossian uses various phrases to describe how faith affects the mind of the unfortunates who suffer from it, including ‘a virus’ that ‘hijacks the reasoning process’ and ‘a corrupted computer code’ that perpetuates ‘a religious-based delusion’.

The author even suggests that faith beliefs should be officially categorised as mental disorders: ‘The DSM [Diagnostic and Statistical Manual of Mental Disorders] gives an exemption for religious-based delusions. Articles and literature don’t use the words “political correctness”, but that’s the basic idea. That is impinging on science and that’s preventing us from helping people through these afflictions.’

For most people, including many atheists, Boghossian’s ranking of religious beliefs as psychiatric disorders crosses a line of decency. To me, it certainly seems to be at odds with his professed desire to ‘engage people of faith in a respectful, sincere, thoughtful and honest way’.

When I raised the prospect that he may be seen as insincere by Christians, Boghossian upbraided me for the suggestion, insisting (without a hint of irony) that he was not singling out Christians. He believes all people of faith are equally delusional.

In fact, Boghossian contends that he is ‘absolutely positively  opposed to name-calling’. The claim that people of faith have a mental disorder is simply a ‘macro containment strategy’ by which we can, at the very least, ‘contain and eradicate the faith virus’.

FAITH BELIEFS SHOULD BE OFFICIALLY CATEGORISED AS MENTAL DISORDERS

Whatever my personal concerns over Boghossian’s enthusiasm to classify believers as medically delusional, I was interested to know what others made of his claims about the nature of faith itself. So I organised an online straw poll, one for Christians and one for atheists. We asked Christians whether they mean ‘believing without evidence’ when they use the word ‘faith’?

The vast majority of Christian respondents disagreed with Boghossian’s definition of faith. Perhaps, just as unsurprisingly, the majority of nonbelievers took the opposite view (see chart). While not conclusive or rigorous, the poll showed that there is clearly a chasm of understanding between the two camps.

Ultimately, however, I can’t help feeling that this particular brand of evangelistic atheism is doomed to failure for the same reason that overzealous Christian attempts at evangelism fail. Anyone on the receiving end of Boghossian’s ‘street epistemology’ is likely to feel they are being treated more as an exercise in logical thinking than as a real person. Perhaps even proselytising atheists should take note of the Apostle Peter’s advice on evangelism: ‘do it with gentleness and respect’ (1 Peter 3:15). 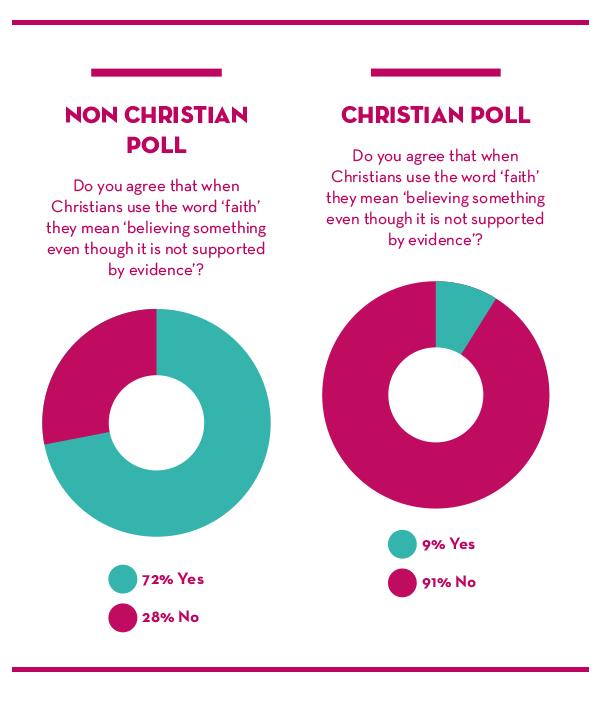