The Man with Two Worlds

Sam Childers is a conflicting character. On one hand he’s the pastor of a church he literally built from the ground up, aided by the construction company he owned. On the other, he’s a feared figure in Sudan who rescues children from rebel forces, driving into the war zones armed with, as he puts it, ‘a wellworn Bible and a well-oiled AK-47’.

For nearly 15 years he has lived this double life, and in that time has built an orphanage in Nimule, on the Ugandan/Sudan border. This has been a haven for more than 1,000 children, refugees from the horrific violence that has destroyed the surrounding area. Now, with the release of the film Machine Gun Preacher, Childers’ story has been transferred to the silver screen. With it comes a difficult question – how far are you willing to go to do something good? ‘One thing you need to remember when you sell your life to Hollywood,’ Childers laughs, ‘is that there’s no life story that has ever been done that they’ve not amped up somewhere in the movie. The Africa part is amped up, but the early part of my life, where you see the stabbings, robbing drug dealers...that’s not amped up. It was a rough life, but only because I made it rough.’

Childers grew up in rural Pennsylvania and fell into a world of drug addiction, violent crime and self-destruction that had all the hallmarks of leaving him in prison for the rest of his life – or dead on the street. Then, through encouragement from his wife and his mother, he attended a revival meeting at their church and was dramatically saved. Over the next few years, God transformed him from a gun-toting drug addict into a businessman and pastor. But the biggest transformation came when he travelled to the village of Yei in South Sudan to help with a mission project that was repairing buildings damaged in the ongoing civil war. While there he came across the body of a child that had been torn apart by a landmine. 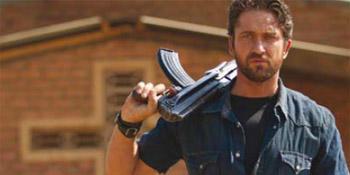 ‘That’s what really changed my life,’ he says. ‘I’d seen a lot of death and violence, I’d been in it all my life, but all that had been from adults fighting each other. What I couldn’t understand was how this could be happening to children. When I stood over that little body I said, “Lord, I’ll do whatever it takes to help these people. Whatever it takes.”’

Childers has told the story so many times in interviews that he almost downplays the scene. Maybe it’s a form of self-preservation, saving him from revisiting this horrific moment over and over again? In his autobiography, Another Man’s War, he gives a more complete account of the experience that would shatter his world.

‘From the waist down there was nothing. I couldn’t tell if it [had] been a boy or a girl. The lower half was just gone. I stood over that little body, looking down at what had once been a precious child – playing, laughing, full of life and energy and hope... One more anonymous casualty out of millions.’
Childers returned to run a mobile clinic a few months later, taking much-needed medical supplies to the outer villages that were deemed too dangerous for the regular aid agencies to visit. ‘I knew I could do something,’ he said in a recent TV interview. ‘In James 4:17 it says that if you know you should do something, then not do it, you have sinned...’

The Sudanese civil war, with the accompanying famine and disease that it caused, has reportedly been responsible for the deaths of more than 2 million people. The outer regions have also faced the harrowing evil that is the Lord’s Resistance Army. This rebel militia, led by Joseph Kony, has left a devastating trail across Southern Sudan and Uganda. They rape, torture and murder villagers, then steal their children to become soldiers or sex slaves.

In Childers’ autobiography he describes the LRA in graphic terms.

‘Kony and his men raid villages looking for children to capture. They shock and traumatize the kids as soon as possible to frighten them into doing anything they’re told. They don’t seem to have any goal or objective other than terrifying people and practicing their gut-wrenching brand of mutilation and disfigurement... They sometimes kill [the children’s] parents in front of them, hacking them to death with machetes or burning them alive. They slice babies out of their mother’s bellies and set them on fire. They make the mother watch before raping and killing her. They cut off noses, breasts, ears, lips, or hands, sometimes forcing the children to eat the cut-off pieces. They hand an eleven-year-old boy a machete and order him to disembowel his mother. He does it.’

The wanton madness of Kony’s diabolical army has seen figures reported of more than 30,000 child abductions, 10,000 people murdered and 400,000 having fled their homes. So when Childers told people that God had shown him where he was to build an orphanage – in the heart of an LRA affected area – it’s no surprise they thought he was crazy.

He sold his construction business and most of his family’s possessions, then put the money towards building somewhere to house the children. When the orphanage was finished, he began to lead armed missions to rescue any children he could find and kill any of the LRA who attacked them.

‘You didn’t have to look hard to find trouble,’ he says. ‘If there was a village that was attacked by the LRA, we’d go in and begin sweeping the area. Then we’d find children hiding in fear in the jungle.’

Resources were scarce, though, with Childers only able to fund one or two trucks for their rescue missions. The seriousness of these restrictions became horribly apparent one night, when they found a large group of children hiding from a recent attack. Childers knew he could only take half of them back with him, and that those left behind would have little chance of survival. As he started to separate those he would save, the others realised what was happening and cried out to him.

‘I turned and told the children that I’d come back for them in a day or so,’ he says. ‘But I knew I’d not be able to return to the area again that soon. I found out a few days later that the LRA had hit the area again and that many of the children had been killed. It still haunts me to this day. Shortly after, I made a commitment to God that I’d never leave another child behind, no matter what it took.’

In the film, this scene is probably the hardest to watch. The screams of terror from the children seem genuine, and the viewer knows what will happen after the trucks drive away. Gerard Butler, most famous for his role as King Leonidas in 300, portrays Childers as someone so traumatised by this moment that he loses faith in God, man, and at times, in the face of such overwhelming horror, the ability to make a difference. It’s these struggles that the film communicates so poignantly, leaving the viewer with a clearer picture of the desperation Childers feels to stop the terrible events from unfolding. Containing brutal scenes and disturbing moments, it’s not an easy watch, and it shouldn’t be.
For many Christians it will be difficult to support someone who wields a gun in one hand and a Bible in the other; a man willing to kill in order to save.

It seems too incongruous. But to see a glimpse of the horrors that Childers has witnessed, to try to live with the knowledge that it will seemingly continue unless someone stands up for the victims, is incredibly challenging. Theologians will argue, quite correctly, about violence not being the solution to any problem, but what can you do in the face of such unrelenting evil? Childers’ take on it is simple – some would say simplistic – but it is also compelling.

‘I do not believe that Jesus Christ ever condoned violence or told us to go out and murder,’ he states. ‘But he does want us to protect our families. To me that family includes the children of Africa.

‘What if your children were kidnapped by these people, and I said to you, “I’ll go in and bring them home”? Would you say, “No, don’t do that. I don’t condone violence”? Or would you say, “Yes, please bring my children home”? My guess is you’d say, “Bring them home.”’

Machine Gun Preacher went on general release in the UK on 2nd November, rated 15. The film contains violent images, offensive language, and provokes questions that are not easily answered.

Another Man’s War is Sam Childers’ autobiographical account of his struggle to build the orphanage in Sudan.