“There should be no question that cannot be asked, that’s too dangerous to discuss…”. So says Steve Chalke in his new book The Lost Message of Paul (SPCK), in which he makes the serious claim that “the core of the New Testament message has been mis-identified”.

He says: “Over the centuries the words of Paul have become weaponized. His words have been used to justify cruelty towards and exclusion of black people, people of colour, women, people of other religions, the wrong sort of Christians...non-believers, and LGBT people”.

What does Chalke mean?

For the past fifty years, and unknown to most church-goers, there has been a debate raging among New Testament scholars. Some of these have claimed that Christians have badly mis-understood Paul. The arguments are not always easy to understand, but allow me to try to explain.

Grab your Bible and look up Galatians 2:16. As long as it’s a recent edition with notes it will say something like this: “So we, too, have put our faith in Christ Jesus that we may be justified by faith in[d] Christ and not by the works of the law…” (NIV)

Seems straightforward, right? We are made right (justified or saved) by our faith in Jesus. But now look up the footnote, denoted above by the letter “d”. It says… “or through the faithfulness of Christ”. So suddenly this reads as though we are made right (justified) not “by faith in Christ”, but “by the faithfulness of Christ”. That’s different. In other words, it’s Christ’s faithfulness to the will of the Father, to obedience to a cross, that saves me, not the fact that I may have said the sinner’s prayer years ago or turned up at church every week since.

“But that’s just one verse”, you say. “Anyone can take a verse out of context and use it badly”. True, but it’s not one verse, turn the page to Galatians 3:23 and you will see the same. And there are similar verses in Romans 3, Philippians 1 and 3, Colossians 2, Ephesians 3 that can all be translated this way. These notes have been added in recent years. We don’t normally bother reading footnotes, but they can shed light on the interpretations of a passage based on authentic scholarship.

This is one of several ideas that builds upon what is called “The New Perspectives on Paul” (NPP). NPP attempts to return to the original First-Century Jewish culture in which Paul lived and wrote and come up with fresh interpretations on some established Christian teachings.  The main debate within NPP has focused on what Paul meant when he talked about “works of the law”. NPP is backed by such luminaries as Tom Wright – but is not without its critics.

Building on NPP, Chalke argues that salvation is more about the faithfulness of Christ than the ability to have faith. Why does that matter? It matters because, if he is right, we are not “saved by faith alone”.

Chalke says that we are not saved by faith in Christ. In fact even the phrase “faith in Christ” is something we inherited from Luther and Calvin’s reaction to the abuses they saw in the 16th Century Church rather than an authentic understanding of Paul in the First-Century church. Instead, he says, we are saved by the faithfulness of Christ.

Is this the old ‘faith vs works’ argument?

It’s a different take on that argument. Chalke argues that having “faith in Christ” is actually hard. Many of us experience times when it’s hard to believe without doubting. So what we call “faith” ends up becoming “a work” ie something we must try hard to do. Chalke says this leads to ‘salvation anxiety’ among Christians, ie do I really have enough faith? How much doubt will stop me getting into heaven? It can cause church-goers to become riddled with guilt.

But “faithfulness” is different – whether it’s faithfulness from us or from Christ. Faithfulness, says Chalke, is more about loyalty to a story, a bit like husband and wife hanging in there even when they don’t feel in love. Faithfulness can embrace doubts.

In fact, says Chalke, a problem in Western Christianity is that we have become obsessed with personal faith and personal salvation. It has all become about how I, as an individual, can get into heaven. I would agree. Many Christians today seem infatuated with a ‘personal salvation project’, and the Christian gospel gets reduced to pie in the sky when you die, rather than a radical life-transforming commitment to a kingdom lifestyle starting here and now.

Where is Steve Chalke going with this argument?

It’s not just “faith in Christ” that this book disagrees with. From the standpoint of immersing oneself in Paul’s culture, Chalke argues there is no original sin, our view of the cross is incorrect, and common views of hell are completely wrong.

To be fair, some of this is not new. For example, many of us long ago gave up (or never really believed) in the idea of hell as eternal conscious torment for people who don’t believe in Jesus. That idea is more medieval than biblical. But Chalke takes these arguments a lot further. He takes the “saved by faithfulness of Christ” line and uses it to develop the idea of ultimate inclusivity, that everyone is included in the Kingdom of God.

He says all people everywhere will be reconciled with God through this faithfulness of Christ. Again, many of us believe that Christ has more ways of revealing himself to people than we can understand, but Chalke’s arguments for universal reconciliation are unconvincing. Chalke says he is not a universalist but he believes in reconciliation of all people through the faithfulness of Christ. Most people will struggle to see the difference.

The good and the bad of this book

“We all know the stories of the pain caused by the misreading of Paul through the centuries...to justify some of the most brutal and repressive episodes in human history...including apartheid, subservience of women, abuse of the environment and oppression of gay people”.

Steve Chalke is right about that and at the very least this book might soften some of the hard edges of the Church. And he is right about the Church at times being preoccupied with personal salvation: “Go to church and get into heaven” is a cheap gospel, as he makes clear.

On the other hand, Chalke’s “everything you know about Paul is wrong” proposal is built on selected scriptures and will be upsetting to ordinary church-goers. To conclude, this book is a helpful contribution, it takes some of the recent technical discussions on Paul (including NPP) and makes them more understandable to the ordinary church-goer, but I would not recommend it widely. 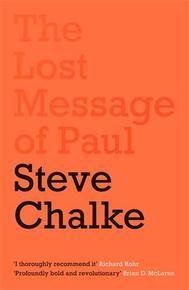 Having said that, it is disappointing to see more articles and blogs condemning Steve Chalke as a heretic. I believe our theology must be impacted by personal stories – and Chalke is someone who has grappled with some of life’s most difficult stories. He brings decades of hard experience with violent young offenders, the homeless and victims of people trafficking. It is from this experience that Chalke’s understanding of inclusivity has emerged, rather than a comfortable study or ivory tower. That doesn’t make him a scholar, and it doesn’t make him right either. But it does make him worth listening to.

The Lost Message of Paul (SPCK) is out now. Click here to read another perspective on the book