Slick politician or messenger of the gospel? Why the jury is out on this Pope Francis documentary

Pope Franics seems to have been placed somewhere between Father Christmas and Jesus in the minds of my more nominal Catholic friends.

He's the most popular Pope in living memory and has notably more presence within popular culture than many of his predecessors. You don't have to be a Christian to appreciate this Pope.

New documentary Pope Francis – a man of his word is exactly what I would expect from a film made by the Vatican. From the opening shots of Italy coupled with the foreboding music, the message is we're about to be invited to watch a living legend at work.

There is much drama building up to the first shots of the Pope. We're given a brief history of his arrival into the role and the reasons for him choosing the name Francis. We learn that he has borrowed the values of Francis of Assisi - a deeply significant decision if this film is to be believed.

Yet more drama comes from the fact that he is the first Jesuit Pope, the first from the Americas (Argentina) and again, the first to take the name Francis. Gravitas is established before we are then given a list of shocking statistics about poverty and injustice in the modern world. After this, the film cuts dramatically to a head shot of the man who is (apparently) the answer to all of our many and varied problems!

Pope Francis talks very deliberately and slowly to camera, answering questions that we never hear posed. He has total freedom to communicate without argument his position on world affairs.

At least half of the film looks at poverty and the global economy and we see Francis attending many different crisis settings giving various speeches to desperate crowds looking for hope. He repeatedly makes it clear that the starting point for his faith is a realisation that you cannot serve God and money and that this is the central corruption that has caused many of the world's evils.

He even goes as far to say that churches with wealth should realise that Jesus has left them and that the gospel must include practically serving those in physical need. He talks about human rights and dignity and the right for all people to work and have a home.

You could be forgiven for feeling like you're watching a very slick politician.

Next, the Pope turns his attention to the environment. It's very in keeping with Francis of Assisi and his great love for nature. We hear poems written by Assisi and many references to 'Mother Earth', a phrase which will result in raised eyebrows for some.

Francis comes across as lighthearted and witty. It's easy to see why he's been dubbed 'The People’s Pope'. At one point he borrows a quote from Thomas Moore: "A smile and sense of humour" is what we all need to get by.

He appears to be very accepting of all people and the different faiths they each represent. He wants us to be united by our "being human and loved by God" rather than divided by our different expressions of religion.

Most of the contentious issues aren't addressed. He talks very briefly about pedophilia in the church and his zero tolerance attitude toward it. When he is asked outright about homosexuality in the church he (again) says "Who am I to judge?".

You would have to be a deeply cynical person to come away feeling any sense of animosity towards the man. After all, he seems mainly concerned with a better and more just world for everyone, and few could argue with that. But the film itself feels too much like a PR job, with Francis being positioned as one of humanity's last hopes... 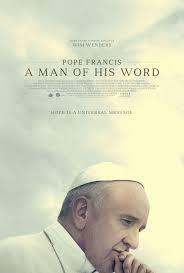 Toward the end of the film I grew concerned there was nothing to point people toward the gospel. Sure, Pope Francis is a great humanitarian. But there had been few mentions of Jesus, the cross or our need for salvation.

Thankfully my judgement was a little premature as Francis did begin to talk about the "game of human freedom" and explained that God took a risk on us all giving us the freedom not to love him back. We each have a choice whether to accept Christ, or not.

Irrespective of the slick PR machine that is the Vatican, the film makes a convincing argument that Pope Francis is a man who cares about people and wants the gospel to be worked out in practical ways. If you're looking for a clear gospel presentation you'll likely be disappointed. But this documentary is a fascinating insight into one of the world's most influential Christian leaders.