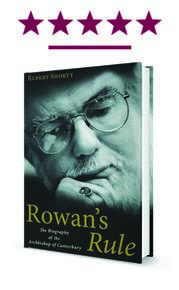 This is a beautifully crafted, 500-page plus biography of the man who served as Archbishop of Canterbury from 2002 to 2012.

It traces Williams’ Welsh roots, his brilliance as a pupil and scholar, and his time as an academic at the universities of Cambridge and Oxford, and as Bishop of Monmouth and Archbishop of Wales. It also highlights his godly response to almost becoming a victim of the 9/11 attacks in New York.

Rowan’s Rule covers the debacle surrounding the appointment of Jeffrey John as Bishop of Reading, despite him being in a same-sex relationship (he subsequently withdrew); the ongoing challenges he faced from the Anglican Communion in the South and from various factions in the UK Church; the growing expectation that women might be appointed as bishops only to have this hope dashed; the political challenges of events such as the Iraq War; and  the overseeing of a Church that faced further challenges in an increasingly post-Christian society.

Shortt depicts Williams as a thoughtful academic; a prayerful, godly man who is concerned with preserving the fragile unity of the Anglican Communion. The book’s title is ironic: he was not someone who sought to impose his ‘rule’ on others.

The author’s measured comments are well-supported. He suggests that Williams did his very best, given who he was and the context in which he served. For those who despaired at some of his public communications, it explains why he was unwilling and unable to provide sound bites on what were extremely complex issues.

Evangelical readers will be simultaneously interested, frustrated and shocked by some of Williams’ views, but will also grasp why he spoke and wrote as he did. If the subject interests you, investment of time in this tome will serve you well. (Andy Peck)