Richard Rohr's simple answers have nothing to do with orthodox Christianity

Richard Rohr is something of a ‘Marmite’ theologian - people either adore or loathe him.

Depending on which side you come down on, you will either find his latest book, The Universal Christ a scintillating and energetic tour de force of broad-brush theology, or an irritating, simplistic and infuriatingly inaccurate repetitive jumble of ideas.

Rohr starts by recounting at length an experience from a friend when travelling on the London Underground; all at once, as she looks down the carriage, she suddenly sees ‘Christ’ in everyone and everything - the ‘universal’ Christ who is in all, whether we realise it or not. Beginning in this way offers a pointer to three features of Rohr’s writing. The first is the primacy of experience; for Rohr, supposedly unmediated experience offers us authoritative insights into reality, including theological truths. The second is that this highlights the shape of his argument, in which he sets out large-scale claims without any real justification, and then writes around them, revisiting them repeatedly and showing their importance. The third is the way he plunders both biblical texts and theologians in the tradition for broad-brush claimed support for his ideas - without any explanation.

He then makes several moves in relation to the nature of God and the Christian revelation. The first move is to separate ‘Jesus’ (the historical figure) from ‘Christ’ (the universal presence of God). In the later chapters, he appears to return to the specifics of the person of Jesus, but it is (like many things) not clear how he makes connections with the earlier language of universality.

His second move consists of an integration between creation and the creator. The incarnation of the universal Christ as the particular Jesus is not something novel, but a continuation of God’s activity, so that the ‘first incarnation’ is the act of creation itself. The principle here is that "God loves things by becoming them" (p20) - which reads very much like the eastern idea of pantheism, and Rohr acknowledges the connection with Buddhism (while asserting differences). The ‘second coming’ of Christ is best understood as the ‘third incarnation’, which is the realisation of the presence of the universal Christ in all. The only thing which separates us from God is our failure to realise that we are not separated from God. What is therefore needed is an awakening or enlightenment, a realisation that God is already present in us.

Putting these together, it is quite difficult to see any of this having any real connection with what could be described as orthodox Christian belief. Rohr claims that his vision is radical, startling, surprising and new, but also merely a recovery of what the writers of the New Testament believed, which the Western church has ‘forgotten’ or obscured. However, he does this by paying no attention to what the texts of Scripture that he cites actually say, or whether theologians he cites really do support his view.

It is then worth asking two questions. The first is: how does he get to this point? Essentially he pays no attention to what things actually mean and say, but happily bends them to fit into his argument. Even his ideas drawn from science (such as the idea that neutrinos are a form of light) are simply wrong. The same is true for his use of scripture and theology. I can honestly say that I did not find a single biblical text which was cited with any plausibility; every single one was either misread, or taken out of context, or even cited with errors.

This happiness with inaccuracy then extends to Rohr’s characterisation of the positions of other people. His argument is choc-a-block with Aunt Sallys, with exaggerated caricatures of opposing views which are depicted as so ridiculous that it is hard to resist how superior Rohr’s own view is. You are either a happy universalist like him, or you are obsessed with a wrathful God who is just waiting to condemn everyone. You either agree with his vision of the cosmic Christ, or you are locked into a narrow misunderstanding which is over concerned with the human Jesus. This is all expressed with an effortless superiority, which I think is something of a paradox. I suspect in person that Rohr is a kind and gentle man. But his consistent line is that he has the mature understanding of Christian faith, and that if you have any objections to it, it is because you have not yet reached his degree of contemplative maturity.

In fact there are some serious pastoral problems with his approach. If the universal Christ is present in all, how do I make sense of that in the person who has hurt or abused me? Can we simply pluck universal formulae from the Bible? Can we really brush aside the ‘scandal of particularity’ so that we don’t need to take Jesus seriously as a first-century Jew? Rohr’s simple answers seem to me to avoid all the difficult questions, and I cannot help feeling that we do people a disservice by taking such an approach.

What Rohr teaches us

But this leads to a second major question to ask: why is Rohr so popular? And what challenge does that leave us?

First, Rohr clearly recognises the divide between ‘thinking’ and ‘feeling’ approaches to faith and spirituality, and clearly comes down on the ‘feeling’ side in response to an over-emphasis on the ‘thinking’ side. Is there a strategy that ensures that ‘orthodox’ thinking does not fall into this trap in the other direction?

Second, I think Rohr articulates a general sense of exhaustion with the complexities of modern life. Rohr’s broad-brush, simple approach has an almost visceral appeal to it. Can we do some serious reflection on life and theology without wearing people out? 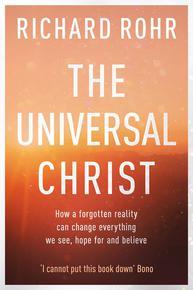 Thirdly, this spills over into how we engage with others and make sense of the world. Can we do justice to the viewpoints of others, with respect, while retaining the integrity of difference?

And lastly, of course, the language of ‘inclusive’ feel much easier to live with in a tired world, even if it is actually incoherent, even in its own terms. Can we disagree with others, even profoundly, while also engaging?

I am not at all convinced that Rohr offers us helpful answers to any of these questions - but he surely highlights the desires around us for spirituality and discipleship which is not confined to the intellectual, which offers rest and respite from complexity, which is content, and is known more for what it is for than what it is against.

The Universal Christ by Richard Rohr is out now and is published by SPCK. Click here to read our interview with Rohr about the book