Richard Dawkins vs. The Old Testament

The Bible just won’t lie down and die. The inevitable demise of scripture as an irrelevant piece of outmoded literature has been predicted many times down the centuries. Yet in 2014, a major TV dramatisation has just aired in the UK, an epic movie about Noah is coming to cinemas, and the Bible continues to outsell every other book on the planet.

Even Richard Dawkins, the world’s best-known atheist, acknowledges the literary debt we owe to scripture. When I invited him to discuss the Old Testament with a rabbi and a Christian he was the first to extol the Bible’s cultural impact.

‘It’s a part of our literary heritage in this country. You can’t appreciate English literature without being familiar with many of the phrases. Many people are probably not aware of the fact that they come from the Bible, many of them from the Old Testament.’

It’s a refreshing admission of the Bible’s literary value. Nevertheless, Dawkins pulls no punches when it comes to his view of the moral value of scripture. As the leading voice for many sceptics around the world we need to be prepared to hear his objections to the relevance of the Old Testament. So, can a rabbi, a Christian and an atheist make sense of the Old Testament today?

ON THE GOD OF THE OLD TESTAMENT...

In The God Delusion (Black Swan), Dawkins famously described Yahweh as ‘arguably the most unpleasant character in all fiction: jealous and proud of it; a petty, unjust, unforgiving control-freak, a capriciously malevolent bully’ and the list went on. But does he still stand by his description today?

‘Yes, I do. I was accused of anti-Semitism by the recent Chief Rabbi Jonathan Sacks, but I don’t know why he thought it was anti-Semitic: it was anti-God,’ he says. ‘The “terror” passages are taken literally by some, and many people do actually believe that the Bible is authored by God. And God, in those “terror” passages, is a horrifically unpleasant character – there’s no getting away from that.’

To Rabbi Josh Levy however, Dawkins’ famous line was overly simplistic: ‘It fails to recognise that the Bible has a number of different texts for how we can understand God. There is also a deeply ethical God who was saying to the Israelites: “You have to care about the vulnerable in your society, do your business honestly, look after your workers, care about the immigrant”.’

I WAS ACCUSED OF ANTI-SEMITISM BY THE CHIEF RABBI, BUT I’M NOT ANTI-SEMITIC, I’M ANTI-GOD

On this point Dawkins is willing to concede. ‘It was a passage that was semi tongue-in-cheek, actually,’ he admits. ‘When I do public readings we usually try to get a laugh from the audience early on because it lightens up the atmosphere, and that passage always gets them roaring with laughter. I do accept that if you look through either the Old or New Testament you can certainly find passages of wisdom that one would ethically approve of.’

In any case, the target audience, it turns out, are American fundamentalists. ‘You have to read The God Delusion through that filter,’ he says. ‘I’m aiming it at least partly at those people in America who are my enemies as a scientist and are subverting scientific education in a very serious way. So in a sense I wasn’t trying to irritate nice, decent, liberal theologians like Chris and Josh.’

Chris Sinkinson laughs to hear himself described as a ‘liberal’ theologian (an assumption Dawkins would later revise), but after affirming the biologist’s right to poke fun at God, he became more serious: ‘The problem is that you are very good with rhetoric which can be very bullying sometimes,’ he says. ‘The passage is clearly a very slanted view of how to read the texts of the Old Testament. Most of us would take the clearer passages to interpret the harder passages. That description of God just does not sound like the God who I worship. The rhetoric can generate a lot more heat than light.’

ON SODOM AND GOMORRAH...

So what about those bits of scripture that led Dawkins to describe God as a malevolent bully, the so-called ‘terror’ passages which provide a ready source of ammunition for every atheist debater on Facebook? When the townspeople of Sodom and Gomorrah demand to rape Lot’s angelic visitors he implores them not to and offers his own daughters instead. Eventually Lot’s family escape and brimstone rains down on the city (Genesis 19). Dawkins cites it as a particular example of why we can’t draw our morality from scripture.

‘It’s all very well saying “Love your neighbour as yourself” or that the Sermon on the Mount is good and Sodom and Gomorrah is horrid. But when you decide which of those stories to base your morals on, you’re not using biblical methods in order to do your deciding. You’re using the methods of a modern moralist in order to pick out the good verses from the bad.’

But not everything in scripture is meant to teach us a moral lesson, says Sinkinson. ‘When we look at the genre I would be asking, “What is the passage doing?”, in particular “is it prescriptive or descriptive?” The Sodom and Gomorrah story is a descriptive passage that is appalling.

I wouldn’t even know where to begin to try to base any morals on it, because it’s not that kind of literature.’

To make the point he quotes Dawkins’ own ‘perceptive’ summary of Lot in The God Delusion: ‘If this dysfunctional family was the best that Sodom had to offer by way of morals, some might begin to feel a certain sympathy with God and his judicial brimstone’ (Cheekily adding, ‘Well, Rabbi Dawkins, I think I’m very happy with that gloss!’) 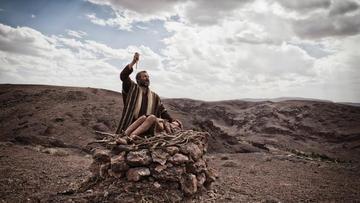 DAWKINS ON ABRAHAM AND ISAAC

Nevertheless, Dawkins still maintains that we need to be concerned about those who do take their morality straight from scripture: ‘There are people in America who want to have the Ten Commandments hung up in courthouses, contrary to the constitution. Although you can find a decent commandment amongst the ten, “Thou shalt not kill or covet thy neighbour” etc…most of them you wouldn’t actually want to base your life on.’

Rabbi Levy offers his own take on the moral value of scripture. ‘The stories, even those “terror” texts, have the ability to raise the questions that are exactly our questions for today,’ he says. ‘That has always been the Jewish approach. Two thousand years ago the rabbis were asking exactly the Rabbi Dawkins’ questions about the text, grappling over what to do with Lot, and condemning him. I think the authentic religious approach to the Old Testament is the one that reads it critically and engages with it in that very critical way.’

Sinkinson stresses the Hebrew scriptures as overall, highly enlightened documents for their time. ‘Let’s give credit to the Old Testament world. Here is an approach to the widow, the orphan and the refugee that I actually find very beautiful. We have to compare the Old Testament documents with texts from that time, such as the Law Codes of Hammurabi. The way in which the Old Testament is very different from those legal codes is that they highlight this egalitarian approach to life.’

ON ABRAHAM BEING CALLED TO SACRIFICE ISAAC...

Abraham and Isaac is a defining moment in the Torah and one that has echoes in the cross of the New Testament. God tests Abraham by asking him to sacrifice his only son, Isaac, but before the deadly blow is struck he provides a ram instead (Genesis 22). For Dawkins it encapsulates the barbaric picture of God in the Old Testament.

‘I trust that nobody thinks that it is a morally good story,’ he says. ‘It’s sometimes interpreted as being God’s way of telling Abraham that you don’t sacrifice humans any more and that you should sacrifice a sheep instead. My feeling is that if God, according to the story, was able to talk to Abraham, why didn’t he just tell him rather than put Isaac through this horrific ordeal?’

In addition to questioning the morality of the story, Dawkins also ventured the view that among ‘sophisticated theologians’ nobody ‘actually believes the story really happened’.

At the risk of looking unsophisticated, Sinkinson the historian took the scientist to task on this point: ‘Actually, I believe that this is a historical event,’ he says. ‘Of course there is biblical narrative – we discover what a beautifully crafted story it is in the way it builds up tension. It provokes a lot of questions rather than necessarily answering them easily. But I’m not quite sure why you would want to dismiss the historical event behind it?’

The revelation of Sinkinson’s evangelical perspective provoked a stunned reaction from Dawkins who, up till now, had ‘charitably’ assumed he was a liberal on such matters.

‘I’m actually rather shocked that you even consider the possibility that it happened. I thought that progressive theologians say that these things are symbolic, moral stories, a bit like Aesop’s Fables – that unlike the surrounding peoples of Canaan, the Jews should stop sacrificing children, but nobody actually thinks that it’s real.’

LET’S GIVE CREDIT TO THE OLD TESTAMENT’S BEAUTIFUL APPROACH TO THE WIDOW, THE ORPHAN AND THE REFUGEE

However, Sinkinson insists that there is no conflict in affirming a historical basis for the story while appreciating its message of progressive revelation – that Yahweh was not the kind of God who required child sacrifice. He pressed Dawkins on the point: ‘Can it not be both/and? Can’t you agree that there’s no reason why it can’t be based on a historical event? Of course, if you don’t believe in God, you’re not going to believe that God spoke to Abraham.’

But for Dawkins, insisting on the factual basis of the story only made things worse: ‘It may be based on a historical event, in which case it’s shocking.’

Meanwhile Rabbi Levy landed somewhere between Dawkins and Sinkinson on questions of historicity – an issue he felt was secondary to appreciating the true value of the Abraham-Isaac story.

‘What we have here is a really fabulous piece of literature, particularly in the original. But it’s also rich morally as well. The Old Testament is there to raise a whole bunch of questions for us that we then have to grapple with if we’re going to live well in the world.’

IS THERE A PUNCHLINE?

There’s an old Jewish joke that goes, ‘Ask two rabbis a question and you’ll get three opinions.’ When it comes to scripture there is a similar multiplicity of views making the rounds today. For those who share Dawkins’ view, the Bible is a literary work of historical interest, but largely irrelevant in terms of modern society.

Rather than moan about the variety of opinions that a multicultural society promotes, perhaps we need to embrace the opportunity to listen to each other. That’s why I get excited about bringing an atheist, a Christian and a rabbi together to debate an issue. Yes, it sounds like the start of a joke, and we’ll probably end up agreeing to disagree, but just occasionally Rabbi Dawkins may say something to keep us on our toes. The question is, are we ready to give an answer?

In the next issue of Premier Christianity magazine, Justin Brierley will be launching a new series, Faith Explored, in which we hear more of the chief objections to the faith from the leading critics of Christianity. You can hear the full debate with Richard Dawkins, Josh Levy and Chris Sinkinson at premier.org.uk/unbelievable