Timothy Keller has gained a reputation as ‘the new CS Lewis’ in some circles. Indeed, Keller’s books do evidence echoes of Lewis’ works: the recognisable inclusion of the fruit of extensive reading, smooth prose and sophisticated philosophical and theological reflection.

Having read most of Keller’s previous books I have also found him to be an engaging and thought-provoking writer; and his latest book, Preaching, continues in this vein.

Keller divides this work into three sections: ‘Serving the Word’, ‘Reaching the People’, and finally, ‘In Demonstration of the Spirit and of Power’. Each section is divided into subsections and is written in a clear and accessible literary style.

For me, the most helpful aspect of the first two sections was the reminder that all of scripture is about Christ and points to Christ’s salvific work on the cross. The author writes that each text demonstrates at least three aspects of the gospel message: What you must do; but can’t; and the truth that there is someone who did.

My only slight criticism of this book is not laid at Keller’s door but that of his publishers. There were a number of typographical errors that should not have got past the copy editor. In Preaching, Keller has made an invaluable contribution to the homiletic task. I would recommend that this book be placed in the hand of the preaching veteran and novice, and should be found in the homiletic section of all theological colleges. AP

Hillsong Church is no stranger to making headlines. Senior pastor Brian Houston’s new book Live Love Lead has been topping the book charts on both sides of the Atlantic since its release in June.

Houston draws on 35 years of experience in pioneering churches that follow a simple liturgy: love God, love Church and love people. He does not hold back from sharing the imperfect, painful and personal struggles from his years of leadership. The pastor also redirects any claims of success. The fruit of every church, song, conference and ministry initiative is attributed to the unmerited, unimaginable grace of God.

Live Love Lead is not a self-help guide. It is not an exegesis of doctrine. It is not a lesson in how to grow a church that matches Hillsong’s global congregation of 100,000. Turn to the literal centre of this book and you find its message: Jesus Christ is Lord and this is Good News for us all.

This book will no doubt come under criticism by readers who are looking for something meatier. This might be fair, but a title that repeats the message that Jesus loves you and is interested in your life is vital for a culture and generation that is screaming for acceptance and direction. JPA

THE ATHEIST WHO DIDN’T EXIST

Andy Bannister has achieved something truly miraculous. Not only has he made apologetics interesting, he’s also made it funny.

The intellectual defence of Christian faith has long had a problem filtering down from the ivory towers of academia to the ordinary man and woman in the pew. The Atheist Who Didn’t Exist: Or the dreadful consequences of bad arguments is the best attempt I’ve come across to bridge the gap and it does so by utilising laugh-out-loud humour (deploying some Monty Python-esque moments along the way) within a variety of amusingly and cryptically titled chapters such as ‘The Peculiar Case of the Postmodern Penguin (or: Why Life without God is Meaningless)’.

However, what I most appreciate about Bannister’s book is the way he deftly pulls the rug from under a wide variety of popular atheistic arguments. By demonstrating some of the leaps of logic and uncritical assumptions that atheists are often unwittingly committed to, he demonstrates how sceptics are driven by faith commitments as much as any believer.

The book is lighter on the positive case for Christianity (one chapter at the end briefly makes the case for Christ). But Bannister’s humorous and down-to-earth approach to the typical arguments of unbelievers will be a brilliant starting point for anyone (whether in the pub or on a Facebook page) wanting to put a stone in the shoe of their atheist brethren. I’ve read a lot of apologetics books in my life and this is definitely in my top ten of all time. JB

At 56 pages long this small, punchy book nearly fits in your pocket and is designed to be an evangelistic giveaway for friends, colleagues or family who aren’t yet followers of Jesus Christ.

Although the book comes from strongly reformed, conservative roots there is no prayer of decision at the back. Instead it encourages you to join a Christianity Explored course. Notably, the language is almost completely devoid of jargon and the content is light on direct scripture quotes.

The language in the book is aimed towards the more middle class enquirer. It talks about ‘being decent’, quotes Gore Vidal and the context of Christmas is in a family setting with a wife and two children. None of this is wrong but it implies a certain target group. It may not work for a single parent or a Dave the Rave.

Would I give this to someone? Definitely, and I may get some for my church to give to the right people in the right setting. It flows well and doesn’t bottle it in the end either. CB

This is a charming collection of hymns, poems and stories about the Christmas season to read with a cuppa or even, dare I say, while on the loo.

Pam Rhodes is known for her cheery disposition and warm empathy as a television and radio interviewer and presenter, and her welcoming personality shines through in this book.

I especially enjoyed her stories that pulled at one’s heartstrings, like her recounting of a group pilgrimage to the Holy Land with an older woman who insisted on wearing impractical flip-flops that were several sizes too big. The group members were annoyed that she was slowing everyone down, but Rhodes later learned that the woman was wearing her son’s shoes as he had been diagnosed with cancer and had to cancel his longed-for trip to Israel. She wanted to walk in the footsteps of Jesus for him, and for her faith in the baby born at Christmas who gave her hope for the future.

This is a gentle book to enjoy and perhaps to give to friends – especially those who might not share our faith. ABP

Muyiwa, one of Britain’s biggest gospel artists, is back with his first studio record since 2011’s critically acclaimed Declaring His Name Around the World.

This ten-track album titled Eko Ile (Lagos is my home) is, as the title suggests, an international offering featuring a diverse group of voices, instruments and languages including Yoruba, Swahili, Zulu and Pidgin English.

The musical delivery and songwriting are as top quality as one might expect from this award-winning artist and radio presenter. ‘Raindrops’ is a catchy reggae ditty about God turning bad circumstances around for good. ‘You Are Good’ is a passionate worship tune and ‘I Love My Country’ a fitting tribute to the singer’s native Nigeria. Many of the songs deal with Muyiwa’s struggles, especially around issues of identity. The singer’s personality shines through the emotional highs and lows of this album. He may sing, talk and pray in multiple languages, but Muyiwa’s joy and exuberance break the language barrier. Eko Ile is vibrant, multicultural and above all, hopeful. SH 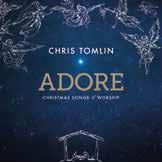 Tucked away in most people’s music library is the obligatory Christmas album or three, and even the grumpiest yuletide Grinch will own something festive.

‘Tis the season to be jolly and, therefore, more and more artists and choirs are releasing Christmas albums. Chris Tomlin’s Adore: Christmas Songs of Worship adds another title to this saturated market.

These live songs are pitched for congregational use, and the twinning of worship and Christmas will attract many churches to adopt them. Traditional tunes with a contemporary twist such as ‘Midnight Clear’ (based on ‘It Came Upon a Midnight Clear’) and the pleasing ‘What Child Is This?’ – an 1865 carol set to ‘Greensleeves’ – are featured. ‘Silent Night’ is disappointingly ordinary and sadly typifies the slightly lacklustre nature of some of the song arrangements on the album. The standout track is ‘It’s Christmas’, an entertaining and jazz-styled medley complete with sleigh bells, which proves an enjoyable listen.

Tomlin followers will no doubt snap up this release. Churches looking to bring Christmas themes into their worship sets will also find this a helpful resource. SR

SONGS TO SURVIVE A FAMILY CHRISTMAS!

It’s not always easy with those tricky family members during the festive season. When you feel the anger rising, try counting to ten. If it’s really difficult, try 20. Or 100. Heck, just keep going. That’s the beauty of numbers; they’re infinite.

Good manners can go a long way towards keeping the peace, so why not try smiling? If you’re finding it difficult to curl the mouth upwards, try closing your eyes and going to a place less troubling, like IKEA on a bank holiday or an A&E department.

If it really gets too much, bear in mind the real meaning behind Christmas, the birth of Jesus. He was born to die to save us all. Yes, even that relative poking your turkey with their best ‘should have bought a packed lunch’ face. Happy Christmas!

Dave Rose is head of programming at Premier Christian Radio