What inspired you to write 40 Days With Jesus? 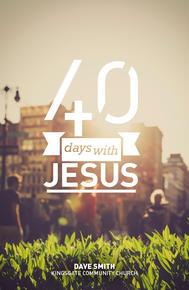 The vision started with a sermon series that we ran post-Easter 2012 here at KingsGate. For many years we’ve had wonderful fruit from special guest services at Christmas and Easter – we would regularly see thousands of people come, including many guests, and a number of people coming to Christ.

But we were sometimes struggling to get people to continue to come after the one-off event. So rather than just using Easter as a oneoff invitation, we made it the first of a series, and called it ‘40 days with Jesus’.

On Easter weekend I preached on Jesus encountering Mary Magdalene. Then we invited people to come back on the 40-day journey, which obviously fits with the biblical account of Jesus’ resurrection on Easter Sunday through to the ascension. Over those weeks we took most of the key stories of Jesus’ encounters – the road to Emmaus, appearing in the upper room, and the breakfast by the sea.

We saw a sudden increase in attendance and a significant increase in the number of people committing their lives to Christ. And we saw many more recommitments. All we did was preach the messages and we ran similar material through small groups.

So is it a course or a devotional?

It is a 40-day devotional that individuals can do on their own, but my real hope is that church leaders and churches will see this as a spiritual growth season. They call them ‘spiritual campaigns’ in America. The theme is the resurrection of Jesus, both the historical evidence for, and the idea that Jesus who appeared to the disciples is still alive today, and we can – by the power of the Holy Spirit – have encounters with him.

Which of the biblical encounters with Jesus do you find particularly powerful?

I love the story of Peter’s breakfast by the sea. It deals with how Jesus helps us with overcoming present failure – Peter had been fishing all night and then Jesus comes and performs the miracle. But it also addresses Peter’s burden of having let Jesus down.

His compassion towards Peter is striking, but he doesn’t duck issues. He seems to re-enact the scene of Peter’s failure by burning coals on the fire. It’s similar to the kind of fire that Peter would have been by when he denied Christ. He asks three times, ‘Do you love me?’ He’s not bringing it up to condemn Peter, but he’s very thorough in his restoration, so that Peter can be fully prepared for what’s ahead. At Pentecost, you get a confident Peter.

What have you learned about Jesus from working on this project?

Reading Tom Wright’s The Resurrection of the Son of God (SPCK) a few years ago opened my eyes to the reality of the resurrection. And preparing the material definitely strengthened my conviction in Jesus’ resurrection body. Jesus had a new but still physical body, which says something about our future resurrection too, and the reality of the new heavens and new earth, rather than the escapist thing of life somewhere up there in heaven.