When Lizzie Velasquez turned 17, she experienced every teenage girl’s worst nightmare. She discovered a YouTube clip of herself in which she was described as the world’s ugliest woman. The clip attracted 4 million hits and thousands of negative comments. One  online commentator even advised her to put a gun to her head and take her own life.

Sadly, bullying became part and parcel of Lizzie’s childhood in Austin, Texas. As a baby, she had developed in the womb without amniotic fluid. Consequently, she was born with an unusual medical condition that prevents her from gaining weight. She may eat around 5,000 calories daily,  but she has never weighed more than 64 pounds.

Her condition, which only two others are known to have worldwide, left her blind in one eye and with limited vision in the other. Now aged 25, Lizzie struggles daily with exhaustion.

Quite remarkably, Lizzie allowed that cruel online video to become a positive turning point in her life.  Speaking of her reaction in her TEDxAustinWomen talk, she says: ‘I cried my eyes out, and I was ready to fight back, but something kind of clicked in my head and I thought: “I’m just going to leave it alone.” I just kind of realised that my life is in my own hands. I could choose to make this really good, or choose to make it really bad.’

Raised a Catholic, Lizzie was  determined not to be defined by the shallow labels imposed upon her by so many. ‘Tell me those negative things? I’m going to use them as a ladder to climb up to my goals,’ said this plucky young woman in that same talk.

Lizzie has since completed a degree in communication studies and trained as a motivational speaker. You only need to watch the aforementioned TED talk to see that she sparkles as she speaks in public.

Lizzie has also published two books exploring the theme of true beauty. She is a woman who is genuinely able to teach from the heart that beauty comes from within, not from without. In order to survive, she has been forced to come to grips with the concept that outward appearance is not what defines a person.

Online bullying, an issue that is understandably close to Lizzie’s heart, takes centre stage in her most recent project: a documentary about her life. When the film is released, it will be accompanied by the launch of The High Road campaign, which encourages those encountering online bullying not to bully back.

Let’s turn the clocks back to your first day at school. You had no idea you were different from other children. What happened?

I went to school and I was super excited...Unfortunately, other kids were very hesitant to talk to me and be around me. They didn’t know how to react because I didn’t look like them…I look at it as a big wake-up call for a five-year-old, because that’s when my eyes were first opened to the reality that I don’t look like everybody else.

The bullying continued throughout your time at school. How did you cope?

I was very blessed to have a very good support system around me from the beginning. I needed my support system for me to be able to get through every day…I took a lot of time for myself at night to pray and hope that I would be able to come to terms with being different. I thought: ‘I’m going to have to figure out a way to live with it and make the best of the situation.’

Can you tell us a bit more about your support system?

I’ve always said that my support system consists of my faith, my family and my friends. I have a very close immediate family and we have a large extended family. Even though there are so many of us we’re still very close. I grew up with a very strong faith foundation from day one, and it’s continued to grow as I’ve got older.

Tell us about your faith…

I was born and raised in the Catholic faith and my parents have  always been very involved in church and volunteering. It was always my dad’s way of wanting to say to God, ‘We will be as close as we can with you, volunteer and do what we can, as long as you help keep Lizzie healthy.’ And so we did that our whole lives. 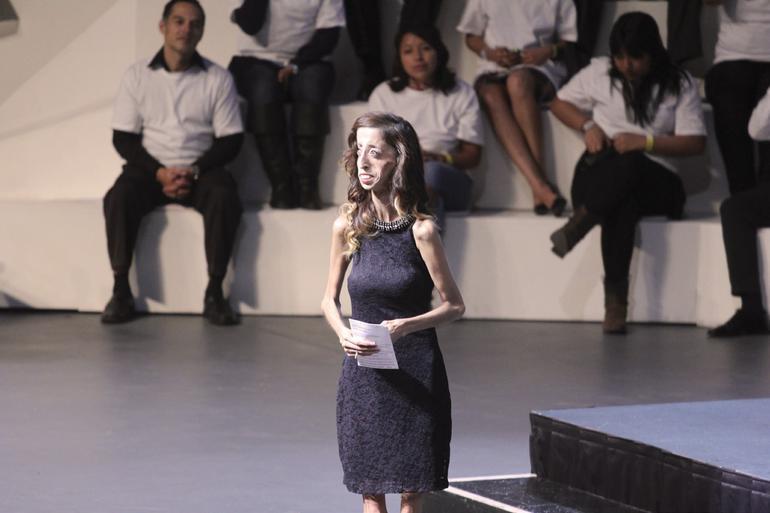 How did you feel when you saw that terrible YouTube clip?

I can easily say that it was one of the lowest points of my entire life. At the time I had no clue how I could ever pick myself up again. There was no way at the time that I thought anything could ever get better because I just felt so crushed.

Was your faith shaken?

I wouldn’t say it was very shaken. I think there was just a lot of confusion about how someone could actually do this to me. How could people tell me these awful things? One of the first things my dad told me when this whole thing came about was that I needed to forgive other people, because that’s what we  believe; forgiveness is key…

At first I thought, ‘Are you crazy? There’s no way I could ever forgive them! They’re so mean!’ But my eyes started opening to the fact that the people who were saying these awful things might not have a great life. And unfortunately, the only way they can make themselves feel better is to make other people feel bad, and I was the person they were making feel bad. It took a lot of prayer, it took a lot of family and it took a lot of friends to help remind me that I’m here for a reason and that there’s a light at the end of the tunnel.

Have you been able to forgive the person who said you should kill yourself?

Have you ever felt angry with God about your health and appearance?

When I was in middle school, yes.  It was when I was an early teenager, probably around the age of 13. I was trying to figure out how to fit in and how to be accepted. And I was just a pre-teen trying to just fit in, but that was on top of getting sick all the time and not looking like everyone else.

It wasn’t easy and I didn’t really know who to blame. The only person I could think of to blame was God. It lasted for a short amount of time…I realised I was being ridiculous and that this syndrome – that I thought God gave me as a curse – was actually a huge blessing.

In what way is it a blessing?

I’ve definitely realised that being born with such a rare condition was meant for a reason. I was meant to have this and I was blessed to have all of these struggles early on in life to not only make me stronger but to also teach me a lot of different life lessons that I’m now able to share with the world.

This year, beauty brand Dove repeated the self-esteem survey it ran 10 years ago. It found that:

69%  of women don’t think they are beautiful

Do you still ask God to heal you?

You’ve clearly learnt to accept and love yourself just as you are, but our culture constantly promotes the idea that value is dictated by appearance. How can we get free from valuing ourselves in that way?

I had to make a rule for myself early on, and that rule was to not allow myself to compare anything about myself to other people, because it’s the number one downfall. It’s so easy to think, ‘If I look like that or if I look like this, my life will be easier’. But it leads down a really bad path. So if you start telling yourself: ‘I’m going to stop comparing myself and I’m going to stop focusing on the bad and start praising the good about myself’, it will make a huge difference.

A recent Dove survey showed that 41% of UK women are unhappy with their body weight and shape. How would you advise a woman who is burdened with unhappiness about her body or appearance?

One of the tricks that I used to try to help [me] learn to love myself was to make a ‘love yourself list’. I wrote down everything I liked about myself; whether it was about my personality, my looks or my values. I posted it up where I could see it every day, and I  read it until I actually believed it.

I think my biggest advice would be to know who you are as a person and to always stay true to yourself. It’s so easy to change and adapt to what you see online, but as long as you’re strong in who you are, and aware of what you believe in and what you know is right and wrong, you’ll be able to get through all the bumps that come along with the Internet.

I’m sure you are becoming a role model to many women. Who are your own role models?

I feel like it’s so easy for people to say that their role models are celebrities and superstars, but to be completely honest with you, the women I look up to are everyday women who contact me from around the world. They are stay-at-home mums or kids in elementary school or grandparents, or doctors. It’s the people who share their stories of struggle and triumph. Those people are the ones that I get my daily inspiration from.

The title of your latest book is Choosing Happiness (Liguori Publications). Do you ever feel sad or disappointed?

Without a doubt. While I’m saying all these positive things, at the same time I am human and I’m frustrated that my body doesn’t have enough energy. I want it to have energy; I feel like I don’t have time to be sick.

There are days where I just cry and I just need to let it out and get it out of my system. But at the same time, I have to choose to start looking at the positive and keep on going.

Find out more about Lizzie’s upcoming documentary and anti-bullying campaign at thelizzieproject.com