Jeff Lucas: Life before death... and after

Resorting to saying, ‘I just pray for...this man’, ‘this woman that you love’, or even ‘my brother’ is unconvincing, and is definitely unhelpful, especially if the person is requesting prayer because they feel insignificant.

I forget my keys, the directions to where I’m going, and I forget that I’m going to live for ever.

That’s right. The Easter message includes that truth that in Christ, life doesn’t stop when our heart does. That truth can be eclipsed not only by busyness, but also by a pendulum swing reaction. We’ve rightly reacted to the false notion that the Christian message is just about getting people signed up for heaven. We’ve realised that the kingdom is now, but in doing so we might have neglected the truth that it is also not yet – that there’s more. And eternity had slipped my mind, until a friend, Isla, nudged my memory last week.

Isla is a Christian, and she’s lived an adventurous life. Married to Gary, who has climbed some of the highest mountains in the world, she has travelled the planet and seen some amazing sights. Recently she found herself viewing a less inspiring spot, the inside of an oncology ward. Ultimately Isla received the dreaded news that she was dying of cancer. She put up the bravest of fights but recently the doctors told her that there was nothing more to be done, and they sent her home to die.

Just a few days ago, we stopped by to see her. Weakened and aged by the disease, she was battling nausea and pain. But a beautiful light shone, banishing the shadow that death casts. She was staring at impending death, but did so with such enormous courage and hope. 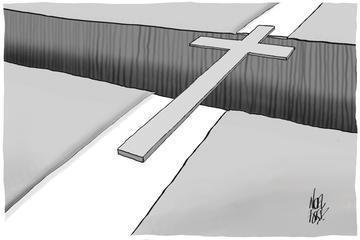 And then it was time for us to leave. For a moment it felt awkward, because we were leaving town, and we all knew that this was likely to be the last time we saw each other. I kissed her on the cheek, thanked her for being such a wonderful neighbour, and then took a deep breath: ‘Isla, it’s not goodbye, is it? We all know it’s just goodnight. Whatever happens, we’ll see you in the morning. Resurrection morning.’ She smiled and nodded, her eyes bright. We prayed together, affirming that she was safe, totally secure with Jesus.

And now she is with him. Just 30 minutes ago, the news came through that Isla has passed. Not only has she lived well, but died well, able to say goodbye.

That doesn’t happen as often as we might think. Sometimes, when Christians are dying, they and others around them go into denial. Thinking that to concede that death might be imminent seems like they are denying their faith claim for healing, they spend their last days denying what is obvious. Tragically, some die with a sense of failure. I know of one dear man who, having been given a terminal diagnosis, refused to let his church know, because he didn’t want to disappoint the intercessors. If I was going on a long journey that involved separation from my friends and family, I’d love to be able to let them know that I was off, and bid them goodbye for now. Isla did just that.

The gospel is about life before death, as we pray and work to see the kingdom come on Earth. But it’s about life after death, as the new Jerusalem comes down to a renewed Earth. I don’t have much idea about what that eternal life will look like, except that this much is true: pain, cancer and tears won’t be there, because Jesus will be.

So this Easter, let’s remind each other of this good news: death is beaten, vanquished in Christ. Too often we forget. I had, until a brave lady who lived next door reminded me. Her name is still Isla, and because Christ was and is, she still is too. She summited the Everest of death and found that, at the summit, there is no flag, but rather a cross, and an empty tomb.

Isla. Now that’s one name that won’t slip my mind.