In taking on the BBC, has Robin Aitken become a modern martyr for truth?

When top BBC journalist Robin Aitken put together a dossier of what he felt were glaring examples of biased broadcasts and sent it to the Director General of the BBC, and to every single one of its governors, he knew his career was on the line. What he had not expected – as a BBC executive and flagship Today programme reporter - was to be ignored completely. They could hardly accuse one of their finest journalists of a lack of accuracy. So instead of analysing the message, they pensioned off the messenger - or, as Robin puts it, “just told me to f*** off, which I did”.

“The BBC came along and offered me this handsome pension offer. I was 50. It was a pension which meant enough to get by on for the rest of my life. So I took it and wrote the book.”

That first book Can we trust the BBC? made Robin Aitken, now 65, a modern martyr for truth among a certain type of intellectual. But this Christian journalist is hardly a household name. Spare, quietly spoken and thoughtful, with the well-modulated tones of the seasoned broadcaster, he considers my questions carefully where we’re sat at the hallowed Royal Society of Arts café near Charing Cross in London.

With his second book, The Noble Liar: How and why the BBC distorts the news to promote a liberal agenda published in November, and already into its second print run, he might just have provoked the reaction he’s been seeking – after 15 years in the freelance career wilderness. The latest Ofcom draft annual plan promises to "publish a review of how the BBC is adapting to the changing news and current affairs environment to ensure it remains a trusted destination for audiences."

Trusted? Aitken does not mince his words: "The BBC along with its media and establishment allies, has become the vehicle for the propagation of a series of lies in pursuit of a political agenda."

Not exactly trusted then. In fact, Aitken believes not just that this agenda is “deeply hostile” to social conservatism, but fails to reflect those views “shared by tens of millions of us.” And what are they? "A traditional moral code that emphasises virtues like patriotism, self-restraint and decency”, he writes in The Noble Liar.

This book, published by edgy eclectic political publisher Biteback (they also publish Bernie Sanders and Alastair Campbell) is an exhilarating or excruciating - depending on your point of view - 282-page rage against political correctness: the BBC is "obsessed with identity politics", he writes, campaigns on behalf of "self-declared victimised minorities" and is the "chief prosecutor against Britain".

It "serves a narrow internationalist elite with squeamish reluctance to voice any criticisms that might be thought to offend foreign sensibilities." What’s more Auntie has become an apostate, has lost her religion and now champions progressive causes, refusing to air debates on pornography, censorship, abortion, you name it. 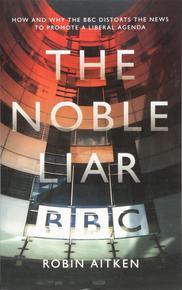 These are robust accusations you would expect to see reported – somewhere. Yet you probably have not heard a peep, unless you read obscure blogs. And that’s surely because much of what he says about the meritocratic élite that run publishing and the media now is true enough: they are today’s Establishment. They run the culture and are able collectively to muscle their critics out of the debate, as they muscled Aitken himself out, perhaps often without even knowing they’re doing it. Aitken’s blunt and even shocking accusations merit attention, yet such is the monopoly of the state-sponsored broadcaster that the book has gone viral – only under the radar of a public square that "ordinary people" – whom Aitken claims to understand - are not licenced to address.

But who are these "ordinary people"? The book does not say. It just assumes we all know really. So I ask him, and he cites his experience setting up the Oxford Food Bank in 2014, for which he was awarded an MBE. “I know it sounds slightly cavalier, but I think what I am saying is I am drawing the distinction between the media class and the rest of humanity.

“One of the great joys of stopping journalism and doing something in my local community is that as a journalist I came to feel that simply being a constant observer was not enough. There was a lack of involvement and agency. It was an education in all sorts of ways. I had lived in Oxford for 30 years. It was the volunteers, the hugely varied spread of humanity that struck me...what was interesting was the higher proportion of church people than you would expect in a random sample: living proof of the fact that do-gooders – so-called – I don’t like the phrase – were very often motivated by personal religious belief – and not just Christians but Muslims, Jews, Sikhs.  But none of them would you meet as a professional journalist.”

He talks of “deformation professionalism” – “that thing which typifies you; an obsession with opinion and political ideas” – but “that’s not how the rest of humanity thinks.”

He became “de-programmed” by the humdrum activities of the food bank, like carrying around sacks of potatoes. It was an antidote to the rarefied atmosphere of the Today programme, and perhaps an attempt to save his sanity.

A poignant article written for the Daily Mail in 2007 after his redundancy and to promote his first book, describes his life at the Beeb as “an ethnic minority”, where he was told he was ‘Mad’ for believing EU negotiations were a matter of democracy, not just economics.

It is Brexit and patriotism that commands some of Aitken’s most withering ire, for here the bias is most manifest. He cites several examples: its “bloodless neutrality” on the negotiations as if broadcast from some distant planet inhabited by journalists who do not share the same interests or emotions as the audience, and that led to a famous spat on Newsnight between Andrea Leadsom and an affronted Emily Maitlis on loyalty to the country. And an infamous memo sent out during the Falklands War about avoiding any sense of partiality when talking about the conflict: "NOT OUR TROOPS: we should try to avoid using ‘our’ when we mean British. We are not Britain.  We are the BBC."

What worries this modern prophet, and whether you agree with Aitken’s politics or not you cannot ignore this, is that "we are in danger of being led blindfold into a way of thinking we have not freely chosen, but have merely absorbed". It has no equal in national life, and touches so many of us directly and intimately, whether in our bathrooms or in our bedrooms or living rooms at all times of day or night.

Britain’s grand tradition of dissent has been effectively silenced according to others like Private Eye’s Ian Hislop who fronted an exhibition on it – ironically - at the British Museum. The Twitter handle @TitaniaMcGrath – run by 40-year old former private school teacher Dr Andrew Doyle - gained an almost instant following of 220,000 as it set out to mock today’s “woke culture” that is obsessed with gender fluidity, identity politics and hates freedom of speech.

We are in danger of being led blindfold into a way of thinking we have not freely chosen, but have merely absorbed

Aitken is unafraid and dismisses the notion that he is courageous. He has a wide circle of “mostly non-believing friends” who think as he does. And the man amiably sitting with me before going to a hospital visit, is clearly no crank. Tenacious yes. Obsessive no.

For by the standard of the BBC’s own motto, what he is saying is true: Over the old entrance to the BBC, in Latin, is written these words: “This Temple of the Arts and Muses is dedicated to Almighty God by the first Governors of Broadcasting House in the year 1931, Sir John Reith being Director-General.  It is their prayer that good seed sown may bring forth a good harvest, that all things hostile to peace or purity may be banished from this house, and that the people, inclining their ear to whatsoever things are beautiful and honest and of good report, may tread the path of wisdom and uprightness.”

Perhaps symbolically, this entrance is no longer used.

The Beeb’s charter cites “Impartiality [as being] at the heart of public service and is the core of the BBC’s commitment to its audiences. We must be inclusive, considering the broad perspective and ensuring the existence of a range of views is appropriately reflected..."

Yet even Martin Bell, the BBC’s former much decorated Foreign Correspondent believes the BBC’s impartiality has become neutrality: "a snare and a delusion" he writes in his book The Death of News, "that makes no judgements, and stands aside at an equal distance between good and evil." He goes even further than Aitken: "News as we have hitherto known it has died and been laid to rest."

The Noble Liar is accusing the single most important media organisation in Britain, that claims around £5bn of our money in licence fees, of bias and corruption so rank that it has already "destroyed the foundational beliefs and practices which informed the lives of previous generations".

It is hard to exaggerate how serious this is. And it is indicative that we have already largely forgotten the Jimmy Savile scandal where the bloated maverick carried on with his sexual predations in an atmosphere so permissive that no child, male or female of any age, who came within his orbit was safe – on BBC premises and over many years.

Is Aitken prepared for the backlash?

"Absolutely! I am pugnacious! I have no reason to be ashamed or reticent about the views I hold. It is self-evidently true that what I write in the book, if it is of any importance, it is this: the ills that afflict us as a society cannot be laid at the door of the church or our Christian heritage. They are the fruit of 50 years of liberal revolution that has overturned our traditional morality." And the BBC is the cheerleader.

The cultural revolutionaries of the 1960s and 70s are now the Establishment and unlikely to heed Aitken. There is a big difference between the old Establishment that could be undermined by media scrutiny and the new Establishment which is the media. Who can debunk it?

"The battle has to be fought at the individual level...to re-affirm the values and rightness of Christian morality" he says.

What sort of campaign does he envisage? "One thing we could do is explore the BBC as publicly committed to values which say that it’s even-handed and impartial, fair and open-minded."

Aitken has written to Lord Tony Hall – again - but has had no reply. "Proving bias is the devil’s own job," he sighs.