How US evangelicals put Trump in the White House

Donald Trump’s victory has shocked much of the world. UK Christians may be surprised to learn that according to exit polls, as many as 81 per cent of white evangelicals in the US voted for the Republican nominee. Johnnie Moore, who sits on Trump’s Evangelical Advisory Board has even suggested that evangelical voters “played the deciding factor”.

Mr Moore told Premier that this voting pattern is a sign that a progressive political agenda in the United States has “moved a little too quickly for mainstream America.”

Given that conservative Christians (dubbed the ‘religious right’) have consistently backed the Republican Party since the 1960s, it’s perhaps unsurprising that the vast majority of evangelicals have supported Trump.

Many prominent American evangelicals, such as Bethel Church’s Bill Johnson and broadcaster Eric Metaxas have spoken out in favour of Trump. Metaxas believes Trump will restore religious liberty to America after 40 years of erosion, and Johnson has attacked the “failed liberal agenda” of the Clinton campaign, citing Clinton’s refusal to defend traditional heterosexual marriage and the rights of the unborn. Commenting on Trump’s history of speaking about women in a demeaning manner Johnson wrote, “Unfortunately neither Billy Graham or Mother Theresa were running for office. That leaves us with the responsibility to do our best with what we have.”

Trump has gained support among conservative Christians by making pro life statements, vowing to defeat ISIS and suggesting individual states should determine their own laws on abortion. 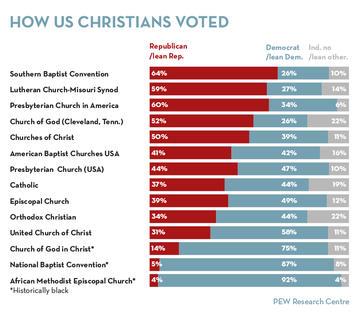 But reporting ‘evangelicals support Trump’ in isolation doesn’t tell the whole story. While white evangelicals continue to back the Republican Party, historically black denominations lean towards the Democrats.

As well as winning the white evangelical vote, Trump also won the all-important Catholic vote (American Catholics are the only religious group who consistently swing from one party to the other). Exit polls suggest that only 45 per cent of Catholics voted for Clinton, while the President-elect won 52 per cent of their vote.

While the headlines claim white evangelicals voted in their droves for Trump, there is a difference between evangelical identity and practice. A person may tick the ‘evangelical’ box when asked by pollsters, but do they read the Bible or regularly attend church?

According to an American National Election Studies report, there’s an inverted relationship between white evangelical support for Trump and their regularity of church attendance; attending church makes them less likely to support Trump. Could it be that nominal evangelicals are supporting Trump far more than those who are committed to regular churchgoing?

Within the (predominantly white) evangelical Church there has long been a link between denominational identity and political identity: ‘I am a Southern Baptist, therefore I vote Republican.’ But shouldn’t voting practice flow out of Christian identity rather than a denominational identity? Some American evangelicals are already asking this question and bucking the Republican trend. The Southern Baptist Convention's Russell Moore has been an outspoken critic of Trump, arguing the President-elect lacks a moral compass.

Some disillusioned Christians haven’t just stopped backing the Republican Party. They’ve moved PA images away from the conservative evangelical camp altogether. Increased access to common voices via social media has led to a disparate movement being formed. Democrat-voting Christians might be an anomaly in their small town, but they can now use social media to meet and other likeminded individuals. Blogger and author, popular among young evangelicals, Rachel Held Evans is one of the key figures in this movement. Raised in a conservative church but now an Episcopalian, she has urged her Christian followers that it's not a contradiction to be pro-life and vote for Clinton.

Even before the election, there were signs that more Christians are eschewing the term ‘evangelical’ because of its political associations. Could the stereotype of evangelical Christians who always vote Republican be changing?

America is divided. One recent survey found that 47 per cent of Clinton supporters, and 31 per cent of Trump supporters have no close friends who voted in the opposite direction.

Unfortunately neither billy graham or mother theresa were running for office

The role of the media appears to have played a key role in the isolation of US voters. In America, all media outlets are heavily weighted red or blue. Unless you’re willing to switch channels, you may never hear the other side of the argument. Social media has exacerbated the problem with Facebook being accused of creating echo chambers and only showing its users content they already agree with.

Some have suggested the Church in America now has an opportunity to bring people together and heal these deep divides. Speaking on the ‘Quick to Listen’ podcast about the importance of reconciliation and repentance, American pastor and researcher Dr Ed Stetzer addressed leaders and said: “There’s some real consequences to words that were said before the election. There’s some people who have driven some pretty significant wedges in the body of Christ in and around this election that I think was a mistake.”