That coverage of Nelson Mandela’s memorial last month was somewhat overshadowed by two trivial stories was almost inevitable. An interpreter for the deaf who turned out to be unable to sign vied with ‘news’ of the Danish Prime Minister Helle Thorning-Schmidt taking a ‘selfie’ with David Cameron and Barack Obama ? poor tributes to what one of the world’s greateststatesmen meant to history and his country. The coverage that Mandela’s life received focused on popular highlights, but largely ignored some of the less palatable aspects of his life and beliefs. 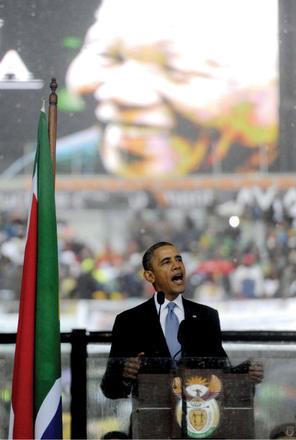 From newscasters to politicians, celebrities to world leaders, the tributes paid to Mandela focused on ideas like ‘goodwill’, ‘peace’ and ‘forgiveness’. Commentary focused on a man who had been imprisoned for 27 years, and who was willing to forgive his captors and his enemies and work for peace and reconciliation. Mostly, it avoided making connections with political reforms he would support today.

Speaking at the massive memorial event held at Johannesburg’s FNB Stadium on 10th December, President Barack Obama said: ‘There are too many people who happily embrace Madiba’s legacy of racial reconciliation, but passionately resist even modest reforms that would challenge chronic poverty and growing inequality.’ The huge crowd of dignitaries and ordinary South Africans applauded warmly, but other commentators did not approve of his inclusion of specific political content.

Janice Crouse, senior fellow at the Beverley LaHaye Institute, a thinktank for a US Christian organisation called Concerned Women for America, told one publication: ‘No wonder Americans are weary of everything and everybody in Washington ? with this President, it’s all politics, all the time,’ in response to Obama’s words.

Others, though, point to a life defined by politics. Mandela went to jail for his political life, and once famously said that he would be willing to die for his politics and the struggle they inspired. His life’s work was to free South Africa from racist rule. His tactics changed from peaceful protest to violent revolution and eventually to reconciliation, but the cause of freedom, his undeniablyleftist, revolutionary politics and the plight of the oppressed and marginalised characterised them all.

‘He wasn’t a saint or a prophet,’ South African author and Christian leader Ken Costa recognised in a moving Holy Trinity Brompton tribute to a man he counted as a personal friend. ‘Mandela vowed to do whatever it takes to bring freedom,’ he said in a tweet. ‘Could we have the same resolve for what matters most to us?’

Mandela vowed to do whatever it takes to bring freedom

It’s easy to read hypocrisy into the tributes paid by some national and world leaders who shared neither friendship nor ideology with Mandela, but perhaps that is just a testimony to what Costa calls his ‘lasting achievement’ of demonstrating that ‘reconciliation is available to all estranged people’

Mandela was a long-time supporter of Palestinian resistance to Israel, once calling Yasser Arafat ‘one of the outstanding freedom fighters of his generation’. Yet Israeli Prime Minister Benjamin Netanyahu called him ‘a highly important moral leader’and President Shimon Peres said that Mandela would ‘live on forever’ in the hearts of those whose lives he touched.

Mandela called former US President George W Bush’s Iraq war ‘a tragedy’ and ‘just an excuse to get Iraq’s oil’. Yet Bush last month eulogised that Mandela (who maintained friendships with Muammar Gaddafi and Fidel Castro) was ‘one of the great forces for freedom and equality of our time’. At Mandela’s memorial service, the current US President shook hands with Raul Castro, Fidel Castro’s brother and an historic enemy of the USA.

Mandela freed his people from oppression. But perhaps his greatest achievement, whatever the motives of those involved, will be to bring together world figures who can agree on little else, to join in Christian author and speaker RT Kendall’s assessment that Mandela was ‘the greatest man in human history outside the Bible’. Those are strong words. But when one man can unite the opinions of the leaders of Iran and Britain, Venezuela and the USA, Israel and the Palestinian Authority, perhaps they are not too strong at all.

“Nelson Mandela showed his courage by his determination in the face of evil and by his humanity in the experience of victory.” Archbishop of Canterbury Justin Welby

“He restored others’ faith in Africa and Africans.” Archbishop Emeritus Desmond Tutu

“I pray that the late President’s example will inspire generations of South Africans to put justice and the common good at the forefront of their political aspirations.” Pope Francis