Dwight Eisenhower, born in Texas in 1890, was a World War II hero. He was also a wartime president during the Korean War (1950-53). He knew the horrors of war and tried to use his presidency to promote peace.

The 34th President of the USA signed the bill which allowed the phrase "under God" to be added to the Pledge of Allegiance. In doing this he said, "From this day forward, the millions of our school children will daily proclaim in every city and town, every village and rural school house, the dedication of our nation and our people to the Almighty."

John Kennedy was born in Massachusetts in 1917. He came to the White House as the US and the Soviet Union were on the brink of nuclear war in the Cuban Missile Crisis. He managed to force the Soviets to back down.

As the only Roman Catholic to have been president, Kennedy was viewed with suspicion that he might be influenced by the Vatican. But he saw this suspicion within a wider social context, "For while this year it may be a Catholic against whom the finger of suspicion is pointed, in other years it has been, and may someday be again, a Jew--or a Quaker--or a Unitarian--or a Baptist. It was Virginia's harassment of Baptist preachers, for example, that helped lead to Jefferson's statute of religious freedom. Today I may be the victim--but tomorrow it may be you…"

Kennedy was assassinated in Dallas while sat in the open-topped presidential car next to his wife Jackie. He became the fourth president to have been assassinated.

Johnson was born in Texas in 1908 and was Kennedy’s Vice President. After Kennedy’s assassination in Dallas in 1963, Johnson was sworn in as the 36th President on board Air Force One, amid concerns of a conspiracy against the government. In the rush there was no Bible available, so he swore on a Roman Catholic missal which had belonged to President Kennedy.

Johnson brought in many antipoverty and civil rights programs but because he involved the US in the Vietnam War he dropped his re-election bid under pressure from anti-war protesters.

He was a member of Disciples of Christ but was a strong upholder of the separation of Church and State, saying, "I believe in the American tradition of separation of church and state which is expressed in the First Amendment to the Constitution. By my office - and by personal conviction - I am sworn to uphold that tradition."

Nixon is most keenly remembered as the only US President to have resigned his office. Despite the Republican president improving relations with China and the Soviet Union in his first term of office, the Watergate scandal forced Nixon to resign. He was a Quaker, though this did not appear to affect every aspect of his presidency. Although it is against Quaker custom to swear an oath, he did so at his inauguration. He also conducted military service despite the Quaker commitment to pacifism.

Ford was president from 1974-1977 during which time he was very private about his faith, saying, it “is a personal thing. It's not something one shouts from the housetops or wears on his sleeve. For me, my religious feeling is a deep personal faith I rely on for guidance from my God."

At his inauguration placed his hand on a family Bible opened at his favourite passage (Proverbs 3:5-6) which he reportedly recited each night in prayer.

Trust in the Lord with all your heart
and lean not on your own understanding;
in all your ways submit to him,
and he will make your paths straight.

Jimmy Carter was president during the Iran hostage crisis. Although he had much success in promoting peace in the Middle East, the increase in inflation and the cost of oil made him appear to be a weak and ineffectual president.

Carter was a Baptist and after his presidency he disagreed with the Southern Baptist Convention about their restrictive teaching on a woman’s role in society. However, he continued teaching at his local church’s Sunday School where he also served as a deacon.

Ronald Reagan was born in Illinois in 1911. As a Republican, his conservative policies were controversial but he was a popular president as he is credited with reviving national morale after the turmoil of the

previous two decades. Some of that popularity may also be because Reagan is the only President to survive after being wounded by an assassination attempt.

Reagan described himself as a "born-again Christian". Before his presidency, he and Nancy attended Bel Air Presbyterian Church. But while in the White House he rarely attended any church services because he didn’t want to inconvenience other members of the congregation. Once he left office he became an official member of the church.

George H. W. Bush, born in Massachusetts in 1924, was the first sitting Vice President to be elected President since Martin van Buren in 1837. As an Episcopalian he was very open about his faith and, at times, openly hostile to atheists. He comfortably spoke about his faith in public saying, "Americans are the most religious people on Earth. And we have always instinctively sensed that God’s purpose was bound up with the cause of liberty."

Bill Clinton was born in Arkansas in 1946. It was meeting President Kennedy during a visit to the White House when he was just 16 years old that inspired him to follow a career in politics.

Clinton attended church as a child and later said that it was an important part of his upbringing. Like many of his generation, his church attendance waned as he entered adulthood but by the time he entered the White House this had changed. The youngest president since Kennedy, during his two terms in the White House (from 1993 to 2001) he attended a local Methodist church with his wife, Hillary.

Occasionally he would open up about his faith. Once he said, "God’s only Son…[brought] the assurance of God’s love and presence in our lives and the promise of salvation."

George W. Bush was the second president to be the child of a former 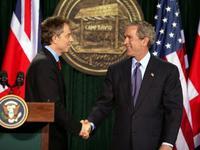 president. Just months after his inauguration, the September 11th terrorist attack took place. His response set the tone for the rest of his presidency. It was famously claimed that he and Tony Blair prayed together before their joint invasion of Iraq. While both Blair and Bush denied praying together, Blair seemed more embarrassed by the claim. This difference in reaction was perhaps down to the different culture around faith and politics in the UK, as opposed to the USA.

Raised in an Episcopalian family, he, as a young adult, was challenged by Evangelist Billy Graham asking if he was "right with God". He replied, "no, but I want to be". Later, when he married Laura Bush he became a member of the Methodist church.

Barack Obama was born in 1961 in Hawaii. The 44th President was the first African American to hold that office. Despite accusations that he was a Muslim, Obama has been open about his Christian faith. Joel Hunter, pastor of Northland Church in Florida and spiritual mentor to Obama says, "There is simply no question about it: Barack Obama is a born again man who has trusted in Jesus Christ with his whole heart."

Speaking at the 2015 National Prayer Breakfast he described how his faith in God has been a source of strength and guidance, "But no matter the challenge, He has been there for all of us.  He’s certainly strengthened me “with the power through his Spirit,” as I’ve sought His guidance not just in my own life but in the life of our nation."

As Trump takes his place in this line, those on the left are disputing his supposed Christian faith in a not dissimilar way to how parts of the right refused to believe his predecessor Barack Obama was a Christian. Over the next days, many Americans will be waiting to see how Trump’s self-professed Christian faith affects his policies. The only thing that Christians on both sides of the aisle can do is pray for the newly elected President and remember how Jesus taught us to dedicate all things to God by praying,"your will be done."