It all started so hopefully. Christians, Muslims and secular Egyptians gathered in Tahrir Square in a popular movement to oust a brutal dictator and fight for democracy. It was one of the iconic images of what ? for a while at least ? we called the Arab Spring. It’s been almost two years now, and spring seems to have turned to autumn, bypassing summer altogether. Egypt stands, according to one commentator, between a precipice and a mountain: between years of difficult work at best and, at worst, bloody disaster. Supporters of political Islam protesting in the streets have been fired at with live ammunition by the military who, not too long ago, were considered Egypt’s heroes. Hundreds of Islamists have been reported killed, and rising religious tensions have resulted in Egyptian Christians coming under attack.

How did we get to this point? How did Egypt’s youthful democracy become a place where elected leaders are removed by military force? How could the ‘Facebook revolution’ that crossed religious and political divides turn into Islamist blood being spilled on the streets of Cairo and Christian churches being attacked?

Little more than a year ago, Mohamed Morsi came to power in Egypt’s first democratic election. His victory was, in some ways, the culmination of the revolution in 2011 that ousted brutal Western-backed dictator Hosni Mubarak. In other ways, it was not. Voters in Egypt’s first Presidential election had to choose between Islamist Morsi and a symbol of the regime that had just been overthrown, former Prime Minister under Mubarak, Ahmed Shafiq. ‘Caught between two difficult and unsavoury options,’ says Dr Harry Hagopian, a lawyer and Middle East consultant for the Catholic Bishops’ Conference in England and Wales, ‘they went for Morsi in the hope that he might be the better man, rather than the right man.’

When do the Christians wake up? When you have some bishops and priests in trouble

That ‘unsavoury’ choice resulted in a very narrow victory for Morsi and his Freedom and Justice Party, backed by the Muslim Brotherhood, amid some claims of vote-rigging. But it’s what happened after the election that is at the heart of what is happening in Egypt now.

‘When Morsi came to power, we were a long way from democracy,’ says Dr Mouneer Hanna Anis, Bishop of the Anglican Diocese of Egypt. ‘If democracy means division and exclusion, lack of security, a bad economy and dividing people according to their religion ? Islamists and non-Islamists ? if this is democracy, I don’t want democracy.’ It is that dissatisfaction that ledprotesters, most of them Muslims ? moderates, leftists and secularists ? to take to the streets in June this year and demand Morsi’s resignation.

‘He took a 51% vote as a mandate to completely change the country and mould it along the lines of Islamic Sharia, and there wasn’t that mandate,’ says Jeremy Moodey, chief executive of Christian charity Embrace the Middle East. ‘The Morsi government was pursuing a very narrow Islamist agenda which did not have the full support of the country,’ he says, ‘which is evidenced by the millions of people who came out to protest against him.’

The scale of the anti-Morsi protests in June dwarfs the pro-Morsi protests in August demanding his return. ‘In all my life I’ve never seen that number of people on the street,’ says Bishop Anis, who believes the protests were necessary because the Egyptian people had no way of calling an early election to prevent the country slipping into a dark future. ‘In Britain you can have a vote of no confidence in the government by your Parliament,’ he says. ‘But we don’t have a parliament. The only people who could do it were the people in the street. People are stronger than any parliament. And they kept crying out for the army to intervene.’

Intervene they did; removing President Morsi and installing the head of the constitutional court as an ‘interim President’. The media have called the action a military coup, which poses problems for Western governments who might be happy to see the back of an Islamist government in Egypt, but who cannot be seen to be aiding undemocratic military coups. Bishop Anis is uncomfortable with the term. ‘I would call it a coup if the army intervened and took the power,’ he says. ‘But for the army to intervene and hand over power to a civil government, that’s a different story completely.’

Moodey thinks the definition is clear, though: ‘The military deposed a democratically elected government. That’s a coup in my book.’ Hagopian agrees: ‘It is a coup. I can’t use another word for it. But it was done because action had to be taken.’

This puts Western powers (particularly those with strong voices calling for the protection of Egypt’s Christians) in an awkward position. ‘Islamists perceive that the West only supports democracy when it produces the right answers,’ says Moodey. ‘And that simply reduces the commitment of Islamists to work through the democratic system.’ It’s certainly hard to imagine theUSA or Britain failing to condemn a military coup against a government whose ideology was less threatening to American regional interests (and, some might say, less threatening to Christians with advocates in the West). It’s also hard to imagine why Islamists would bother engaging democratically again if the Muslim Brotherhood is excluded from Egypt’s political future.

If democracy means division and exclusion, lack of security, a bad economy… I don't want democracy.

‘There is an absolute need for elections for a new parliament, but those elections should be inclusive and they should definitely include the Muslim Brotherhood,’ says Hagopian. ‘Because the minute you outlaw them, you’re adding oil to the fire.’

Bishop Anis agrees that Brotherhood leaders who have committed no crimes should be allowed to stand for election, but feels the public appetite for it is low. ‘The people in the street are saying: “Please, let us recover from [the Muslim Brotherhood’s] rule. Give us a few years.”’

Still, strong calls for President Morsi to be returned to power continue, and Moodey doesn’t think they’re going to go away any time soon. ‘There are two reasons you would support Morsi,’ he says. ‘The first is that you agree with his Islamist agenda, and the second is that you believe that a democratically elected president should be allowed to serve his term or be impeached ? or whatever the constitution may say. It would be entirely possible to support President Morsi from a democratic perspective rather than a purely Islamist one.’ What the West needs to be doing, according to Moodey, is using the leverage and influence of its aid budget to get the military, the Muslim Brotherhood and all parties to sit down and talk, and map out a new route towards democracy.

But democracy may not be in the interest of Egypt’s Christians. In a majority Muslim country where Islamists have won elections, Copts and other streams of Christianity have long had an uneasy relationship with the military dictatorships that tolerated them. That relationship became more strained under the democratically elected Muslim Brotherhood government. ‘During Morsi’s reign, many sectarian clashes happened,’ says Bishop Anis. ‘The Coptic cathedral had never been attacked. It was attacked this year.’ According to the bishop, Christians have benefited greatly from the coup, both in terms of political influence and religious freedom. But that is under threat as Christians, along with moderate Muslims, secularists and the military have become the focus of some Islamist extremists’ rage.

‘The risk here is that the Copts are identified with the West,’ says Moodey. It’s a danger Hagopian sees mirrored in Christian reactions to the Syrian crisis. ‘One-hundred thousand dead, 2 million refugees, 4 million displaced inside the country. And when do the Christians wake up? When you have some bishops and priests in trouble.’

The bloody clashes between Islamists and the military in August coincided with increasing reports of attacks on Christians. Hagopian feels that for well-meaning Western Christians to focus only on this aspect of the Egyptian crisis would be unhelpful. ‘We should pray for these communities, but we should also realise that we are not doing them a great service by constantly singling them out,’ he says. ‘That is the kind of publicity that fanatical Islamists would take as proof that those Christians are not really integrated into their society, and are therefore untrustworthy.’

For Christians and Muslims alike, Egypt’s path to democracy is unlikely to be quick or easy. ‘Democracy requires a lot of preparation,’ says Bishop Anis. ‘It needs a lot of education and we are not there yet. A gradual process of democracy is important.’

Lessons clearly need to be learned from the experience of the Morsi Presidency. ‘What needs to happen is a national consensus on creating stronger political institutions so that democracy is more firmly rooted,’ says Moodey, who feels there should also be ‘checks and balances that would prevent the kind of thing that happened when Morsi was in power’

We're looking at an abyss on the one side and a mountain on the other.

But that presupposes a democratic way forward through the current crisis. ‘We’re sitting on a cliff edge,’ says Hagopian. ‘We’re looking at an abyss on the one side and at a mountain on the other. Either this whole thing is going to spin out of control…or we are seeing the birth pains that were experienced in the UK and the US, where democracy and democratic institutions weren’tlaid down in one or two years.’ 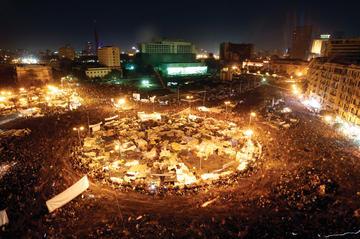 In the face of such uncertainty, Bishop Anis asks for our prayers: ‘We don’t want to lose anyone. Muslim Brotherhood supporters are people created in the image of God, created by God and in the eyes of God are precious. So we don’t want any bloodshed or violence. Pray that reconciliation would happen.’

FEB 2011: President Mubarak steps down after years of dictatorship and repressing the Muslim Brotherhood

NOV 2011: Clashes between pro-democracy demonstrators and military over slow progress to democracy