Domestic violence and the UK Church

Domestic violence is prevalent within the UK Church community, with almost a fifth (19%) of adults having experienced their partner refusing to accept no for an answer when he or she wants to have sex, according to an exclusive survey conducted by Christianity magazine. For 6% of the 443 people who completed the survey, which was held in conjunction with domestic abuse charity Restored as part of their ‘In Churches Too’ campaign, this is a frequent experience. 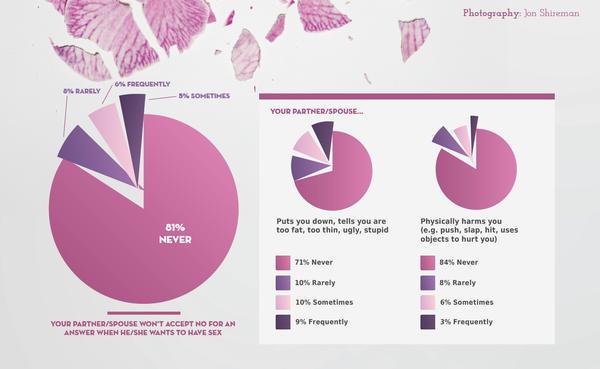 Restored’s co-director Mandy Marshall described this as the most concerning of the survey’s findings. ‘This is rape…Sexual violence is in our churches and we need to be crystal clear in communicating that this is criminal, a sin and destructive,’ she said. Maggie Ellis, psychosexual therapist and director of Lifecentre Rape Crisis service, said: ‘Any experience of sex without consent is illegal in the UK, including within marriage. Rightly so; the impact of sex without consent is always damaging. Within marriage it creates a mire of long-term problems sexually and relationally.’

Of the 87 men who responded to whether their partner ever refused to accept no for an answer when they wanted to have sex, 9% had experienced this. ‘This shows that we must not assume the sexist stereotype that it is always the woman saying no and the man pushing through for self-gratifying sex,’ Ellis said.

Aside from sexual violence, the survey indicated that 16% had experienced physical harm (such as being pushed, slapped, hit or hurt using an object) at the hands of their partner. Other forms of abuse were also shown to be commonplace, with 40% of respondents having experienced their partner using intimidation including glaring, shouting, smashing things or sulking in order to get their own way. Up to a third had also experienced putdowns from their partner, such as being told that they were too fat, too thin, ugly or stupid, or being isolated from friends, family or work colleagues by their partner. ‘This highlights the need for education and raising awareness on issues of power and control within relationships, what abuse is and what it looks like,’ said Marshall.

Who completed the survey?

Respondents were very aware of the existence of domestic violence within the Christian community, with 95% acknowledging that this does take place within Christian families. The majority of respondents (87%) said that one of the reasons that domestic violence occurred was because a partner needed to have authority and control over a relationship.

Regarding the perceived causes of domestic violence, 16% agreed with the statement ‘domestic violence sometimes takes place because women don’t submit to their husbands or partners’. Marshall described this statistic as concerning butunsurprising, saying, ‘It demonstrates the work that needs to be done by the Church in ensuring theological teaching does not lead to creating an enabling environment for abuse to occur.’

Just over half of respondents who had suffered domestic violence had sought information or help. Friends were the first people that victims had sought help from, closely followed by the Church. However, only 42% agreed with the statement: ‘My church is a safe place for people suffering abuse’ and 40% were unsure of whom to contact in their church if they, or someone they knew, were suffering domestic abuse.

Rob Parsons, chair of Care for the Family, said: ‘In our experience, the second deepest hurt of those who have suffered abuse is so often having nobody who will listen to their plight, or even sometimes a Church culture which will not allow the possibility that such things could occur within its community. When churches ? and many do ? provide the “safe place” to which this survey refers, they fulfil their mission to help “Heal the broken-hearted.”’ ‘Overall, the survey displays that Christians and the Church have some way to go in understanding the nature of abuse (power and control issues), how to respond, and supporting those who disclose. Notwithstanding that, some churches are doing great work in this area,’ Marshall said.