Cowboy & Preacher is a 92-minute documentary set in Boise, Idaho, with one main aim: to convince viewers of the biblical mandate to care for the environment and of the Christian case for action against climate change.

Filmmaker and presenter Will Fraser, who comes across as a less winsome Louis Theroux, tells the story of rancher and retired Vineyard pastor Tri Robinson who lives in an eco-friendly house on several acres of land. Through a series of conversations about the scriptural underpinning for Robinson’s ecological convictions, the film explores the idea that God’s people are not taking seriously his command to steward the earth.

This documentary provides a unique insight into a very specific way of living off the land which few people in our increasingly urbanised world will be familiar with. In that sense it’s a snapshot of a rural idyll that seems at once nostalgic and unobtainable.

In both form and content Cowboy & Preacher flies in the face of the fast-paced, sensationalist documentaries we’re increasingly used to watching. While this can make it seem at times slow-moving and tangential, it provides a pleasant remedy to the consumerist mindset that wants information fast and in digestible soundbites and graphics; which is precisely the anti-consumerist message Robinson wants to convey.

Robinson – the cowboy and the preacher – comes across as a thoughtful and deeply spiritual man who has devoted his life to the two noble aims of evangelism and environmental conservation. As far as living out his beliefs, he’s a wonderful role model.

At one point in the film, Fraser admits that through the making of Cowboy & Preacher he has become a more “committed Christian” and one is left wondering what part Robinson played in his journey.

While this documentary presents effectively the biblical arguments for care for creation, many viewers will struggle to make the links between Robinson’s life and their own. The fact that he admits to being both a Republican and an environmentalist may be helpful for American viewers who struggle to see how their understanding of climate change can be compatible with their political affiliations. It’s great that this film is being released just before the American election, in which Donald Trump (arch climate change denier) has a real chance of being re-elected. 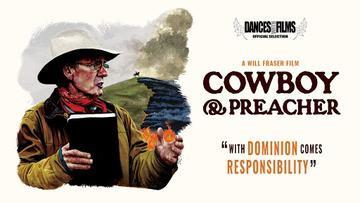 For those familiar with the arguments and the need for action, this film will not tell you anything new, but it may highlight specific Bible passages in a more profound light. Overall, it’s a well-made and thoughtful piece of film making, but one that won’t have mass appeal, particularly for a British audience.

Watch Cowboy & Preacher on Amazon Prime or purchase the DVD at cowboyandpreacher.com