Christ the Redeemer: Why Rio's statue is the true God of the Olympics

If ever you wanted a concrete reminder that God is watching, the host city of the 2016 Olympic and Paralympic Games - Rio de Janeiro - has one. Literally.

Standing 30 metres tall and situated at the peak of Rio de Janeiro’s Corcovado mountain, the reinforced concrete statue of Christ the Redeemer is designed to be visible from virtually every part of the city.

The art deco monument is instantly recognisable, and since its completion in 1931 it has been embraced as a symbol not only of Christianity but of Rio de Janeiro and even Brazil.

Of course, having a god preside over the Olympic Games is nothing new. Rewind a couple of thousand years and you would find the ancient Olympic Games being held in the shadow of Mount Olympus, in Greece. This was supposedly where Zeus lived (in whose honour the Games were held), along with his family, the other major Greek gods. There were a few other differences, too, like the competitors being all male, and wearing even less than beach volleyball players, but then, as now, the Games were supposed to be a time for people from different parts of the world to come together peacefully in a celebration of human excellence.

The statue of Christ the Redeemer isn’t even as old as the modern Olympics, which started in 1896 in Athens, but of course the artwork symbolises something far older: the redeeming work of Christ. Originally intended to hold a cross and a globe, the design was changed so that Christ’s pose itself suggested the cross, his arms outstretched in a patient embrace that Brazilians sometimes call ‘the hug’, his head tilted gently downwards as if compassionately watching over the city and the thousands of tourists who ascend his mountain every day.

The sight of Jesus (or at least, a representation of him) on our screens as we watch the Olympics acts as a reminder that Christ really is able to redeem all things. And despite the scandals about environmental pollution and indecent assaults by athletes that have marred the Games so far, there are plenty of stories of hope and grace coming out of Rio, too. Stories like that of Rafaela Silva, born in the lawless City of God favela, now a gold medal winner for Brazil, her life transformed by sport; or Majlinda Kelmendi, whose gold was Kosovo’s first ever medal, and who wants her victory to show that anything is possible, even for children from poor, war-torn countries.

Christ the Redeemer has featured not only in recent Olympic footage, but also in films, documentaries and TV shows set in Rio. Despite the irony of the sinless lamb of God being used as a backdrop for scenes of vice and violence, the statue’s appearance doesn’t seem incongruous so much as responsive. The compassionate embrace includes everyone, from Olympic athletes to drug dealers, from top politicians to favela kids.

One poignant photo (see below) from the Second World War shows the statue stretching its arms behind a squadron of warplanes, as if showing that Christ’s compassion includes the whole hurting world. 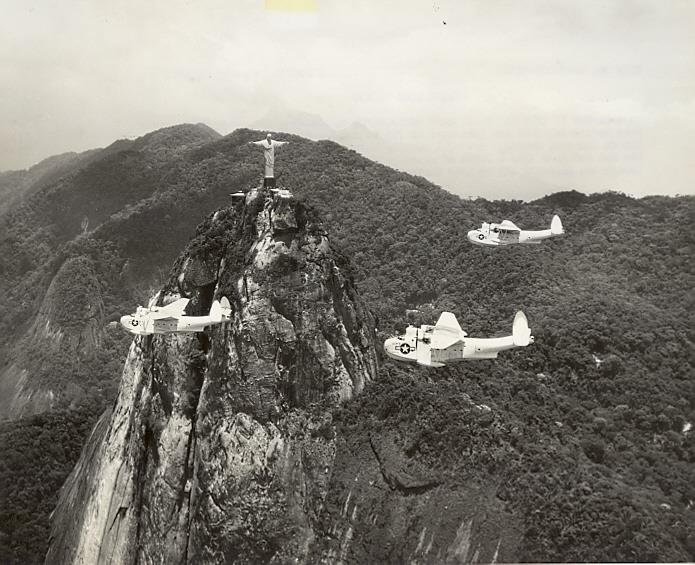 Let’s hope there will be more stories like Rafaela’s and Majlinda’s, and that doping, crime and terrorism won’t be a feature of Rio’s Olympics. But whatever the next few weeks hold, let’s remember that Jesus Christ is able to redeem every situation and every person, no matter how hopeless it may seem. ‘The hug’ is for all of us.

Karen Murdarasi is a freelance journalist