Breakthrough: The gripping new Christian film based on a true story

Breakthrough promised to be different from other Christian films, and, to an extent, it did deliver something new. The story is about a young boy, John Smith, who has been adopted and feels that he doesn’t fit in with his community. His parents, Joyce and Josh, have sought to affirm him and give him everything he needs, both materially and spiritually, but he still feels lost.

Joyce, played by Chrissy Metz, has been a pillar in her local church but a new, impossibly casual and contemporary Pastor Jason Noble, played by Topher Grace, brings change. He introduces modern forms of worship (enter Lecrae, as himself) and shakes up the sermon style. Immediately it’s clear that Joyce and the pastor do not see eye to eye.

John’s school is a Christian school and the town is small. Life seems simple and very all-American, until the fatal accident that the film is centred around takes place. Seeing the boys fall through the ice is brilliantly executed. It feels terrifying and final.

The pace immediately shifts as the crisis unfolds and the following scenes deliver gripping tension. The focal point of the film is Joyce, whose strong faith in Jesus prevents her accepting her son’s death after doctors are unable to resuscitate him. There is an interesting exploration of the different responses people have to tragic circumstances, with Joyce’s husband (Josh Lucas) who is also a Christian reacting with denial and withdrawing from the family. As the boy’s prognosis worsens the film pulls you further in.

Breakthrough is based on a true story and it’s endorsed by the Smith family to whom this ordeal actually happened. As such it is full of accurate facts. The medical scenes and details of John’s hospital records are included so the viewer is educated and set up for the spectacular outcome. The grim reality of what John’s body has undergone is not missed.

As the story unfolds, Joyce’s resolve strengthens as she starts to see signs of John’s miraculous recovery. The reasons for her faith and her own backstory make the relationship she has with her adopted son more poignant.  This subtly conveys the gospel truth that we are all adopted and grafted into God’s family.

In contrast to the tenacious faith shown by Joyce is the journey towards the possibility of faith explored by Tommy, who rescues John at the scene. He is an atheist firefighter faced with a quandary. The boy he saves is pronounced dead in the hospital hours later and yet the same boy, walks out of hospital weeks later with no effects from the drowning. What’s more, he can’t reconcile his unbelief with a voice he heard at the frozen lake telling him to go back and look again for John’s body. This is a refreshing portrayal of an atheist character that is far from the stereotype.

Perhaps the greatest element of the whole story, aside from the trump card of it actually being true, is that there is space devoted to the question ‘Why’? Why does God seemingly choose to intervene in some circumstances and not others? Why is one person healed and not another? This can be the most important question for so many people and a huge stumbling block towards a move to faith. It was such a relief that it wasn’t ignored.

Overall this film does what it says on the tin. There are some elements that might feel culturally awkward in the UK but the loud and clear message is: this is true, this happened. It also doesn’t feel confrontational to those who do not have a faith, and as far as faith-based films go, it's one of the best I've seen. Go and watch it, but take your tissues! 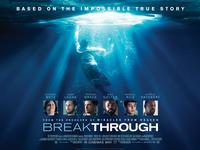