Francis Chan’s first book in six years - Letters to the Church - doesn't make for comfortable reading. You won’t like all of it, much less agree with it. But when it comes to finding a challenging, thought-provoking, paradigm-shifting Christian paperback, it doesn’t get much better than this.

Don’t be deceived by the easy-to-read style of this title either. It might be most convicting for church leaders or those who are heavily involved in church ministry, but every Christian can get a huge amount out of this. It’s a must-read for anyone who cares about the health of the Church, especially the Church in the Western world.

1. What people want from church is different to what the Bible commands

Chan then asks the same leaders to list biblical commands regarding what church should be. The responses look very different: “Love one another as I have loved you” (John 15:12), “Look after widows and orphans in their distress” (James 1:27) and “Make disciples of all nations” (Matthew 28:19).

"Soren Kierkegaard was appalled at the state church which he believed had grown apathetic and insincere. Kiekegaard believed that true Christianity is costly and demands humility. Because the gospel exposes our failures and insists that we can only find life through the grace of God, our self esteem comes under attack as we acknowledge that Jesus alone saves. But what Kiekegaard saw in the Church were constant attempts to make Christianity more palatable, more popular, less offensive. He said if we strip away the offense from Christianity and try to make things fun and easy for everyone 'then lock the churches, the sooner the better, or turn them into places of amusement which stand open all day long!'"

Chan also references the Christian author Alan Hirsch on this point. Hirsch writes: "If you have to use marketing and the lures of entertainment to attract people, then you will have to keep them there on the [same] principle because that is what people buy into…Win them with entertainment and you have to keep them there by entertaining them. For a whole lot of reasons, this commitment seems to get harder year after year. We end up creating a whip for our own backs.”

Chan’s fear is we’ve created “human-centred churches” by trying to package church in a way which ensures no one gets offended: “People will either be awed by the sacred or they will not. If the sacred is not enough then it is clear the Spirit has not done a work in their lives. If the sheep don’t hear his voice, let them walk away. Don’t call out with your own voice.”

3. We say we value the Bible. But our actions suggest otherwise

Every church says they believe the Bible is the Word of God. But do we really act like it’s true?

Chan is worried we put far too much emphasis on preachers needing to “make the Word come alive”. He admits his own preaching habits “have shown that I believe God's words are dead and require my creativity to bring them to life”.

Picking up on 1 Timothy 4:13 - "devote yourself to the public reading of Scripture" - Chan proposes we follow what the Bible says about the Bible, and start reading and proclaiming it with no interruptions.

He wants us to be "addicted to God’s word and less fanatical about preachers".

He tells the story of his friend who gathered people for a time of public Bible reading. They read in shifts and managed to get through the entire Bible in 72 hours. “He tried to describe the feeling they had when the final words were read. Ultimately, it was unexplainable. The Word did something that far exceeded their expectations.”

Chan points out this group had done in three days what many Christians won’t do in their lifetimes.

4. We’ve been wasting our most precious resource

When he led a US megachurch, Chan put a sign in the lobby saying children under 5 years old were not allowed in the sanctuary. His motives were good, as the idea was to encourage children into age-specific programs. Now, he wonders if he was guilty of underestimating God’s ability to use them.

Much of Chan’s book draws on his experiences of the Church outside of the Western world. His thoughts on young people are no exception as he recounts the experiences of his friend Jen who disciples children in Africa.

“Last year these children shared the gospel with 169 unreached people groups. They are sharing the gospel in places where adult missionaries have been killed for trying to spread the gospel…Jen tells me how these kids went into one village where there was a giant kiln. This was the place where the villagers sacrificed their own children. This group of Christian children came into this village and led so many to Jesus, the people decided to tear down the kiln!…Don’t you find it even a bit discouraging that these kids are transforming villages while our kids are watching puppet shows on Jonah and learning songs with hand motions? It could be that we’ve been wasting our most precious resource. It could be that we have been treating our greatest asset as obligations.”

5. It’s time to free the animals and open the cages

It was while having lunch with a São Paulo pastor that Chan first heard the analogy: “The church feels too much like a zoo…we take these powerful animals out of the jungle and put them on display in cages”.

Chan believes our dominant church culture takes people who should be pioneering missionaries and makes them far too comfortable. He recalls a fascinating story about the Chinese underground church. Apparently once some government restrictions were lifted, rather than meeting in homes, Christians began to rent big buildings and run services like Western churches. The results were disastrous.

“They talked about the good old days when their people were risking their lives and radically sharing the gospel…But now these pastors were lamenting the way their people attend services and expect the leaders to feed them and cater to them…What started as a movement became a bunch of people sitting safely in services”.

If you’re predisposed to hate generalisations of any form, this may not be the book for you. See, for example, Chan’s stinging indictment of American churches: “Rather than producing powerful and fearless missionaries who go to the ends of the earth, we are left with thirty-somethings who live in their parents’ basements and complain about not having a singles’ group. After all, how can a Christian possibly survive outside of a singles’ cage with weekly feedings?”

6. Suffering is part of the deal

Chan is so distraught by the mismatch between Jesus’ words and common church teaching on suffering that he devotes an entire chapter to it. “There are so many men and women who have been taught that they can become Christians and it will cost them nothing. And they believe it! There are even some who have the audacity to teach that life will get better once they pray a prayer and ask Jesus into their hearts. Jesus taught the exact opposite!”

Chan begs his readers to look at the scriptures carefully (Luke 14:25-33, Mark 8:34-37, Matthew 24:9-14, etc) and see that suffering is all through the New Testament and should be considered a normal part of the Christian life.

He admits Western Christians may never have to run from physical suffering like our persecuted brothers and sisters in other parts of the world. But that doesn’t mean we’re off the hook!

“More and more often, people are starting to water down their convictions because they don’t want to offend anyone. Instead of embracing the persecution that comes with standing out from and against the world, we have begun to embrace the world to try and convince it to tolerate us. That is not the way it was supposed to be…Jesus and the apostles were persecuted because what they said and taught was so counter cultural. The culture of our world is just as ugly, if not more so, than it was in Jesus’ time. The teaching of the church should be radically different from that of the world.”

So how do we fix it? 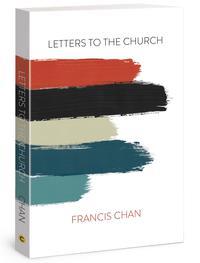 If you’re thinking this is all sounding a bit too negative, you’d be right. There are many points in the book where Chan’s passion can be read as frustration or even anger. But that doesn’t mean he’s wrong. He's taken care to form biblically-based arguments and the scripture references in his book are plentiful. Letters to the Church also begins with some important caveats (he’s doesn't have all the answers, he loves the Church and you should too - it's the bride of Christ. Oh, and don’t use this book to beat your pastor over the head!).

Chan has a radical (and in my view only partial) solution to many of the above problems. This won’t come as a shock to anyone who has followed the author’s personal story in recent years, but in a nutshell, Chan, after leaving his US megachurch at the height of its success took his family to Asia and in the process became convinced that small church is better than big church. That’s an oversimplification, as is some of the above. So for the full details on that point, along with everything else you’ll just have to buy the book…

Click here to read our interview with Francis Chan