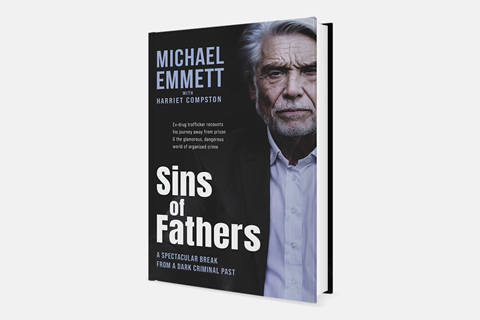 Growing up, Michael Emmett suffered from the impact of both sexual abuse and having a father who was a career criminal. He was drawn into a chaotic life of crime, violence and drug use. Arrested and sentenced for twelve years for drug smuggling, Emmett began a journey to Christian faith in prison. He connected with Holy Trinity Brompton (HTB) and became a key person in the growth of the Alpha course in prisons.

Emmett’s personal charm and eventful life should be the basis for an inspiring book. Sadly, though, Sins of Fathers is a disappointing read.

One issue is the clunky writing style and the continual use of very short sentences, which gives little flow to the narrative. Linked to this, the rapid introduction and exiting of key characters gives a sense of superficiality to the story. Also, some of the language grates, such as the

word ‘naughty’ being frequently used to describe everything from stealing, to affairs and even a murder he witnesses.

Emmett’s encounter with God was undoubtedly profound and he has since helped many others find faith. He does not hide how his problems continued alongside his high-profile involvement with HTB. But the book focuses too much on the glamorous chaos of Emmett’s life: police chases, flash cars, lavish holidays, brushes with celebrities and his sexual unfaithfulness.

The epilogue is the only part of the book that approaches any depth of reflection. So rather than gritty and transformative, the story reads as shallow and sentimental. There is a tsunami of gushy comments about his children, but little insight given to the real impact of his behaviour on those closest to him. It makes you wonder how others would tell the story.

Jon KuhrtJon Kuhrt captains a cricket team in the Surrey league and works as an adviser to the government on how faith groups respond to homelessness.