How God miraculously protected us from Storm Arwen 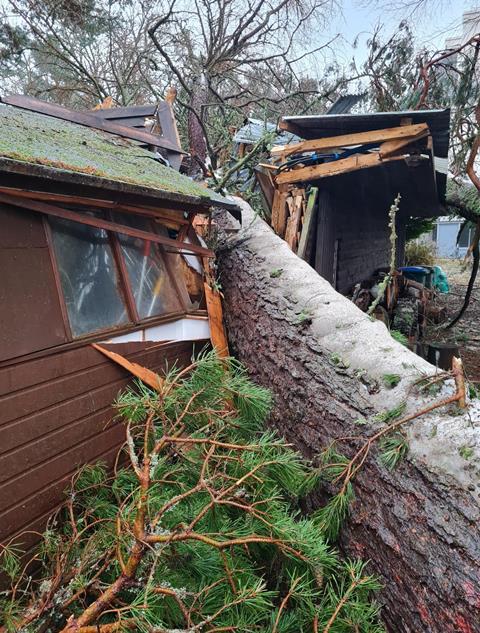 Over the years, I have often read the accounts of powerful storms that have hit various countries around the world. You can sit in the comfort of your home and empathise with the people who have been impacted. But it's only when you experience the effects of 100mph winds yourself, that you can truly understand what it's like.

On 26 November last year, I experienced Storm Arwen up close and personal.

God called my wife and I to Compass Christian Centre in Glenshee, Scotland some ten years ago and we have seen him work wondrously over those years. Due to Covid there have only been three of us living on site - my wife Robyn, myself and our close ally Heather MacDonald.

Given our location, a highland Scottish Glen, I wasn't too worried by the strong winds we experienced on that November morning. It wasn’t that bad (or so I thought). But by late afternoon the winds increased into something quite significant, and I started to realise that Arwen was a storm we should be taking more seriously.

That afternoon the lights flickered a few times in our home, then around 5:30pm they went out.

The room we sat in was lit only by the flickering flames of our wood burning stove. As all the other noises in the house stopped, we could clearly hear the rush of the wind outside.

When you don’t have the television to distract you, all you can do is concentrate on the wind hitting the house. It felt like the Flying Scotsman was continually circling around our home.  The noise, the battering and the sound of objects flying through the air was worrying.

Nowhere else to go

The pandemic had given us the opportunity to rebuild and refurbish our old Scottish hunting lodge. Progress was going well. But as we sat in that candle lit room, listening to the roar of the storm, my mind wondered what Arwen was doing to our beloved site.

I have learned over the years that when I have nowhere else to go to, I must go to the rock that is immovable, to the one who rebukes the wind and the waves. I thought of the disciples in the boat with Jesus on the sea of Galilee. As these hardened young fishermen feared for their lives, Jesus slept. What an incredible illustration of the peace that passes all our understanding. When they woke Jesus up and asked for help, he didn't given them all a big hug or make them a hot cocoa. He chastised them for their lack of faith, rebuked the wind and the storm stopped.  As I sat there that night I simply prayed, "Father, we are in your hands. Protect us. Protect our properties. Protect our neighbours.”

We got what sleep we could that night, wondering what we would find the next morning.

As the light started to dawn on Saturday morning, I got myself dressed and took our dogs out to inspect what had happened during the night. To be honest I simply was not prepared for what I was about to see. Huge 130 year-old trees were down everywhere. Wherever I looked there was utter carnage; the landscape had taken a terrible battering from the anger of Arwen.

No matter what direction I looked in, there was devastation. There were tears in my eyes as I experienced the emotion of shock, a feeling of numbness and a sense of being utterly helpless. Where do I start? I thought to myself.

After an hour or so, Heather and I took a walk around the whole site to more closely inspect all that had happened. There was damage, of course. But we started to realise that our main buildings had actually been spared anything too bad. An enormous tree had hit the back of the lodge, but the damage was superficial. As we walked around, we started to realise that God had answered our prayers. This was going to take some time to clear up and at considerable expense (insurance hopefully will cover some parts) but none of our buildings would have to be demolished.

Our thoughts then turned to our neighbours. We set off to check up on them to see if they had survived (we honestly believed we could find any one of them under rubble). As we arrived at their cottages, we once again witnessed the answer to our prayers. Oh, how easy it is to pray in ‘glorious unbelief’, but that morning we witnessed miracles. Huge trees had come down all around them, often missing their small cottages by tiny distances. Yes, they were shaken, but they were alive. Our neighbouring farmer later told us that trees had missed their home by inches. How great is our God! 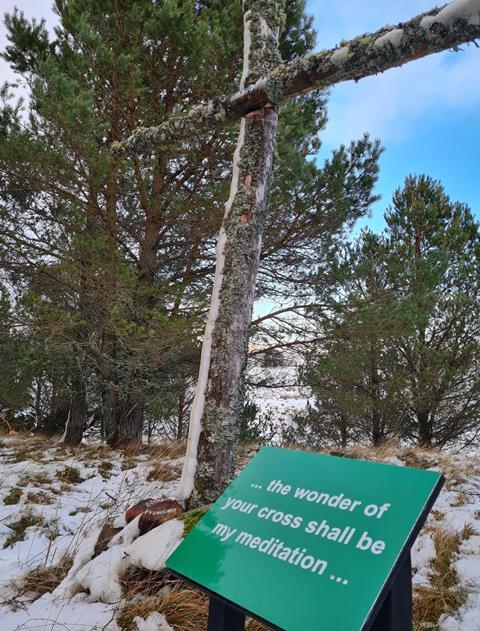 Some years ago, we felt that God was leading us to erect an 'old wooden cross' on top of the hill at the back of our site. Mostly held up by a few boulders, it wouldn’t take much to push over. Even a small child could topple it if they wanted to.

Arwen had come from the north and the cross was directly in line with her ferocious wind. If massive trees couldn’t withstand her rage, there was no way this shaky cross would still be there. I expected it to be in a neighbouring glen!

And yet, as I stood on that hill, surrounded by fallen trees, the cross was there, intact and unshaken. I felt the power of God's spirit descend upon me and all I could do was worship. “Praise God from whom all blessings flow / Praise him you creatures here below / Praise him above you heavenly host / Praise Father, Son and Holy Ghost”.  His presence was still with us, and he had protected us in the midst of a terrible storm.

It took a further six days before our power would be restored by the engineers of the electricity board. In that time, we were able to reflect on what we had just come through. As I wrote the accounts in my journal, I noticed the verse at the bottom of the page from Mark 9:23, “All things are possible to him who believes”. Over these past several years, God has been challenging me on this very thing, “Nigel, do you really believe in me?”