Sins as old as time: one year on from the Capitol riots

When protestors stormed the US Capitol, they remade God in their own image and weaponised Christianity, says Ryan Diaz. One year on, he reflects on the need for all believers to re-examine our allegiance to the Jesus of the Gospels 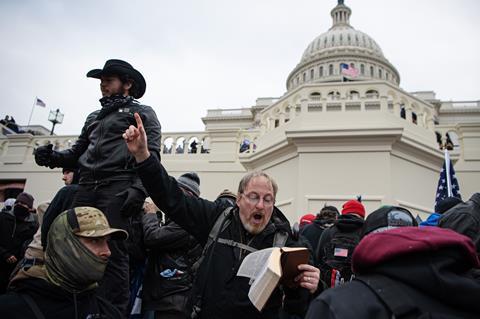 This time last year, I was sitting with my friend in an office, watching men and women storm the Capitol building. We stared blankly at the TV in disbelief. The political commentary given by the talking heads in the right-hand corner of the screen was a distant noise, drowned out by the immensity of the things we were watching unfold. After the elections, everyone knew there would be fallout. But to see our nation’s capital besieged was not something I’d thought I’d witness in my lifetime.

A lot can be said about the political and social ramifications of January 6th 2021. But for Christians, the spiritual ramifications are of equal concern. The events of that day were carried out by men and women who believed God was on their side, waving flags that proclaimed: “Jesus is my saviour, Trump is my president.” Many of the rioters who stormed the Capitol saw themselves as agents of divine justice, taking America back from the forces of evil, defending God and party in the same breath. It was symptomatic of a branch of Christianity that has coalesced Christian identity, political extremism and white nationalism. This Christian identity is Christ-flavoured; it bears the trappings of Christianity but, at its core, is a theology centered on America as a new Israel and Jesus as champion of the constitution; a theology informed by extra-biblical sources and held in the same light as sacred scripture.

The dangers of this are clear - its misguided attempt to redefine Christian orthodoxy, its reordering of Christian hope around upending the American political system and its rewriting of the Christian story, which centers America as the culmination of salvation history. On January 6th 2021, Christianity was weaponised and turned into an object of violence; a weapon used to defend white nostalgia against the perceived evils of the globalised left. 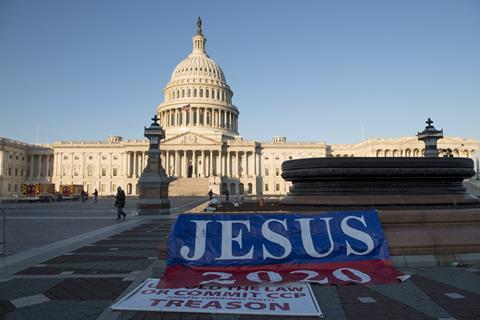 A flag left behind after protests at the US Capitol

But most Christians I know, both politically conservative and politically liberal, saw the dangers. Friends on both sides of the political aisle have condemned the events of January 6th and the theology that motivated its ‘Christian’ collaborators. It’s easy to look at pictures from that day, of the men and women calling on God to save America, shouting: “Jesus saves!” with confederate flags in hand, and balk at the notion that that would ever be us. But their motivations are all too human. They want to feel safe. They want to be heard. And when someone comes along with a ‘gospel’ that promises prosperity and freedom, it is easy to see the allure and say with St. Paul: “I am astonished that you are so quickly deserting the one who called you to himself…and are turning to a different gospel” (Galatians 1:6). January 6th teaches us about the dangers of marrying Christ to human ambition, political or otherwise. And while it’s easy to condemn the insurrectionists, we must also recognise that we are prone to the same sins that gave birth to the events of that day, sins as old as the Genesis account itself.

Creating God in our image

In Genesis, the biblical writers tell the story of the origin of Babylon as a critique of the Babylonian empire. It begins with a goal: “Come, let us build ourselves a city, and a tower with its top in the heavens, and let us make a name for ourselves” (Genesis 11:4 NRSV). Babylon, which prided itself on its superiority is pictured as a product of human brokenness; the desire to exalt ourselves, make ourselves in our image and be like God, knowing good and evil. The root of human sinfulness is our desire to supplant God with a god of our own making. The origins of Babylon serve as a warning for any human project that sets to exalt itself above God.

On January 6th 2021, Christianity was weaponised and turned into an object of violence

In the Biblical narrative, Babylon serves as a type of human fallenness, an empire built on human brokenness and under the oppression of dark spiritual powers. Within each of us is the capacity to forge a Babel of our own. We, too, possess the desire to build a god that mirrors our desires and consoles our fears. The motivations of the Capitol rioters are rooted in the same desires that motivated humanity to build Babel. We all want to make a name for ourselves. We all want to be like God.

The attack on the US Capitol cost people their lives and exposed the dangerous consequences of the current political rhetoric in America. But the rioters and their supporters are not unique. They are a part of a long line of misguided humans who have sought to refashion God for themselves. We are a part of that same line and, if we are not careful, we will be guilty of the same sins that built Babel and sent men and women to the Capitol to sow mayhem and discord.

A year later, it would be wise to consider our allegiances. To: “choose this day whom you will serve” (Joshua 24:15). For Jesus himself made it quite plain: “no one can serve two masters, he will either hate one or love the other.” We are called to serve one Lord, and he is shaping us into his image. The moment we reverse that process, the moment we dethrone God with a god made in our image, we enthrall ourselves and are put into the service of dark spiritual powers. January 6th 2021 is a sobering reminder of the ever-present dangers of idolatry, and we are called not only to confront it in the world but within ourselves as well.

Ryan DiazRyan Diaz is a poet, writer, and theologian from Queens, NY. He holds a BA in History from St. Johns University and is currently completing a MA in Biblical Studies. His work has been featured in publications like Ekstasis, Dappled Things and Busted Halo. Ryan’s writing attempts to find the divine in the ordinary, the thin place where fantasy and reality meet. His first poetry collection, For Those Wandering Along the Way, was released in 2021. He currently lives in Queens, NY with his wife Janiece. Keep up with Ryan's work at www.avagueidea.com