Why we turned our Sunday services into an Alpha course

From above it’s like a patchwork quilt: chairs arranged in squares; the people on them like stitches, holding it together. The Church.

But, for St Andrew’s Furnace Green, this is not normal church. For three months, they turned their usual Sunday service into a large-scale shared breakfast and Alpha course. 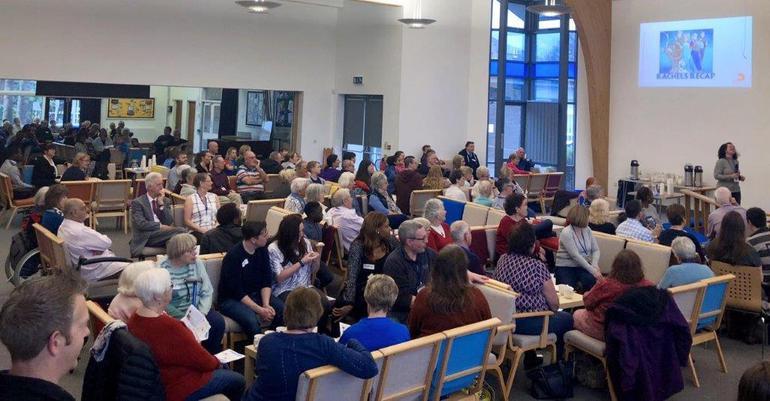 The initiative stemmed from Vicar Richard Poole’s niggling restlessness about the purpose and direction of church.

“We’ve been running evening Alpha for years but felt most of the seed was falling on the path. We looked busy but we weren’t really making any impact.”

Richard had been struck by the story of The Miraculous Catch (John 21) where the risen Jesus advised the disciples: “Throw your net on the right side of the boat”.

“They’d always fished on the left hand side. Creatures of habit,” explains Richard, “We’re the same. I knew it was time for St Andrew’s to put our nets over the other side. I didn’t know what this would look like. I only knew what we were doing wasn’t working.

“Then Alpha leader Jim Lashwood came to me with the idea of Sunday Alpha. We knew it would be controversial but felt this was what the Holy Spirit wanted. People were genuinely worried it would damage the church. But although we looked successful, we were just prolonging the decline that’s taking place nationally in the church.”

A turning point came during a tricky Church Forum when, after 14 objections had been raised, someone commented, “I feel really uncomfortable about this. But I’ve learned that Richard does hear from God.  Although I don’t understand, I trust him and I’m willing to go for it.”

“It was like a prophetic word quashing all the arguments,” says Richard “Suddenly everyone just went, ‘Okay, let’s do it.’

“This step of faith was the most important thing. Alpha is wonderful, but Alpha wasn’t ‘it’; Alpha was the test. Would we give up our comfortable way of doing church and try something new? It was costly for the congregation. We’ve addressed that consumer model of church, where people think it’s all about them. It’s not. It’s about the Kingdom, proclaiming the Gospel; the lost being found and prodigals coming home.”

“We researched but it seemed no one had done it quite like this. We had to ‘reinvent the wheel’. Around 100 volunteers stepped up. A hotel manager did a fantastic job coordinating a buffet breakfast.  Another group set up the church. 36 group leaders came forward. Then there was children’s work...”

Youth Alpha ran alongside the main service, while children had sessions based on the video themes (written entirely by the team as there is no “Children’s Alpha”). These were also run in lunchtimes at the local school.

“We had around 45 under-18s on Sundays and 70 at the school clubs, with some overlap.” says Rachel Clark, Director of Children & Families.

After breakfast and worship, this children’s work was linked to the main Alpha service with “Rachel’s Recap”, after which the adults’ video was shown, followed by 15 minutes of discussion.

“People worried about the discussion, but they really enjoyed it and complained they needed more time” says Richard. “Rather than allocating groups, people were allowed to gravitate wherever they liked. In a church where people didn’t really know each other it’s grown the sense of belonging.”

The mornings finished with a response opportunity, intercessions and more worship.

“Then nobody wanted to go home!" Richard says, explaining how he witnessed hundreds of people throughout the church huddled in groups talking, pockets of people praying, and every age represented from young to old.

"Many years earlier we’d had a vision about this. Suddenly, without engineering it, that vision was becoming reality.”

Around 50 people responded, with at least 9 new Christians among the adults and 22 of the children. People who had left the church returned. 25 people want to be baptised or confirmed. But Richard says it isn't just the numbers which have changed.

“It’s changed us by making church accessible and bringing oneness. It’s raised up new leaders. Faith and discipleship has grown in so many people.”

“I want to make church accessible to all generations and see people come to faith” says Richard, “I don’t want to be part of a declining church. What we’re doing here is not accepting that. The good news is really good news and we’re living in a world that needs to hear this more than ever.”

Clare O’Driscoll is a language tutor, writer and cook. She is also part of the editorial team at magnet magazine