If you think it’s difficult admitting you’re a Christian in secular Britain, try doing it in the heart of the most rampantly atheist industry on the planet — the comedy world.

I found myself getting back into Christianity, and one day the idea hit me to do a comedy show about it. Comedians naturally talk about what’s happening in their lives, especially at the Edinburgh Festival, where semi-theatrical one person shows about very personal events (usually traumatic, for some reason) have become the norm.

I told my manager the idea, he said it was genius, and that was it, I was committed.

As I write this I am half way through the Festival and it has been hard but rewarding (isn’t that what Christianity is all about?). Coming out as a Christian to anyone is difficult enough. As I joke in the show, when I told my dad I was a Christian he took it so hard I had to tell him I was gay just to take the edge off.

Coming out as a Christian in the comedy world, you can take that embarrassment and times it by ten. Of course it’s shameful and absurd that I should be embarrassed about believing in Jesus. And yet that’s how I felt.

Since at least the 90s, stand up comedy has been wildly hostile to Christianity. Bill Hicks is perhaps the most famous example, and since then there have been many followers, setting up their lazy straw targets and knocking them down before a complacent crowd, both parties kidding themselves that what they are doing is somehow ‘edgy’.

Maybe when Bill Hicks started performing, several decades ago in the American south, there was some truth to that perception. But beating up on Christianity in comedy has for a long time now resembled kicking a man when he’s down.

That’s why I claim that the most subversive thing you can do in 2019, especially as a comedian, is embrace Jesus Christ as your Lord and Saviour.

I phrase it like that to be funny, but it’s also true. If I was at the Edinburgh Festival attacking Christianity, everyone would feel warm and fuzzy. If my show was about realising I’m actually a woman, I would win an award. If I talked about being a Muslim, I would get my own show on Channel 4 (actual real world example).

That’s all fine, but why is a show that is positive about Christianity such a hard pill to swallow? That is one of the questions I am attempting to deal with *adopts pretentious voice* through the medium of comedy.

I also suggest in the show that our promiscuous dating culture has got out of hand and we should instead be meeting one person and getting married post haste, that we would all be less depressed if we re-embraced Christianity, and that former Liberal Democrat leader Tim Farron would not have been hounded out of his job for following any other religion.

All evidence to back up my claim that the most radical show at the Edinburgh Festival 2019 is a Christian show.

Every night I have been trying to strike the balance between being positive about Christianity and being hilarious. The show is for Christians and non-Christians alike, and getting it right has been tricky. Luckily I am one of the best comedians in the world, so I’ve got it covered (I know pride is one of the seven sins, but this just happens to be true).

The best thing so far has been the joy from Christian audience members when they realise that, for once, a comedy show is not mocking them but affirming them. I have been told by several people on different evenings that the show is ‘uplifting’. I never imagined this, being a cynical northern curmudgeon, but the people have spoken. They all tell me, without consulting each other, that the other shows they have seen are ‘dark’.

It is true that for a long time these one person shows, though they appear in the comedy section, have focused on personal trauma. My show instead focuses on how coming back to Christianity will change your life for the better, with the added bonus of being way funnier than all the misery memoir shows once again doing the rounds in Edinburgh.

And as I say, it has ended up being the most rebellious thing I could do. I have even coined the phrase "Saying your prayers is the new rock and roll".

So that’s my show, it’s called Christianity and Me and it’s at the Edinburgh Festival all month. 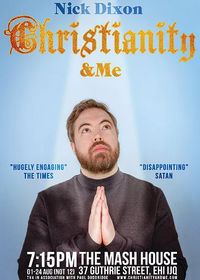 Come for the banter, stay for Jesus.

Nick Dixon is a British-born comic who became a rising star on both sides of the Atlantic after reaching the final of the prestigious 'So You Think You're Funny?' competition at the Edinburgh festival in 2012. Nick has recently made two popular appearances on the TV show Comedy Central at the Comedy Store. His biggest career accolade to date is being chosen from his YouTube video clips to write jokes for Hollywood heavyweight Will Smith's Genie character in the remake of Disney's Aladdin. You might also recognise Nick from TV's Go Compareadvert, where he showed his incredible acting range, by nailing the role of a mumbling discontented white man with a beard. For more information about his latest show visit christianityandme.com. You can also listen to Premier Christian Radio's interview him here